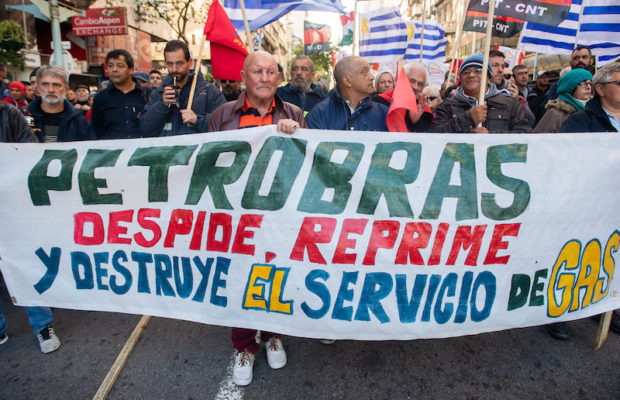 On June 10, Uruguayan gas workers began an indefinite sectorial general strike in defense of the source of employment, public service of natural gas and national sovereignty. In Montevideo, a group of workers set a camp in the Plaza Independencia, outside the office of Brazilian oil and gas distribution company Petrobras. The call for the strike was given by the Autonomous Union of Gas Workers and Employees (UAOEGAS).

The strike began with a demonstration at the Plaza Independencia. It received the support of the Uruguayan tannery workers union and also from the Brazilian oil workers union. A delegation of Brazilian workers reached Uruguay in the morning on June 10 and marched alongside the Uruguayan workers in solidarity with their claims.

The strike has been called for in solidarity with the gas workers of MontevideoGas company, who have been fighting in defense of their jobs since the last week of April. MontevideoGas is owned by Petrobras and has been operating in Uruguay since 2004. On April 26, Petrobras announced its departure from the country on the pretext that they were incurring losses. The company announced that it would dismiss around 40 of its employees in the near future and refused to renew the unemployment insurance of over 20 workers.

Since the announcement, it has already dismissed 11 of its workers. The gas workers’ union is demanding the re-incorporation of the dismissed workers and the renewal of the unemployment insurance of all the workers. It is also demanding the immediate incorporation of the recently suspended workers. Over 57 workers were suspended with the warning of dismissal after the incident on April 25, in which the workers had taken control of the plant as well as the premises of the MontevideoGas company.

The UAOEGAS originally planned to begin the indefinite strike on May 27, but the decision was suspended after the union leader Alejandro Acosta, along with other union members, the president and general secretary of PIT-CNT, met with President Tabaré Vázquez on May 24. In the meeting the president Vázquez assured that his administration would work to find a solution to the conflict.

After Petrobras refused to the Uruguayan government’s request to find a solution to the issues and negotiate over its departure policies, the union gave the call for the strike. The company reaffirmed that it would not change its decision on dismissals, unemployment insurance or suspension of workers. Petrobras has rejected all three negotiation requests made by the Uruguayan government in past one month.

The Plenario Intersindical de Trabajadores – Convención Nacional de Trabajadores (PIT-CNT), the national trade union center, has also called for a 24-hour general strike on June 25 in support of the workers of MontevideoGas. The president of the trade union center has indicated that the general strike would address to the issues of other conflicting sectors such as agriculture and industry.

On May 29, the two gas workers of MontevideoGas, who had been on an indefinite hunger strike since April 30, decided to end it after 30 days. The decision was taken after the Energy and Mining minister, Guillermo Moncecchi, and Labor and Social Security minister, Ernesto Murro, announced through a press conference that Petrobras had not accepted the proposal of the Executive Power (PE) to advance the negotiations. The UAOEGAS said that the hunger strike served its political purpose of enlightening the Uruguayan government of the repressive and corporate policies of Petrobras.