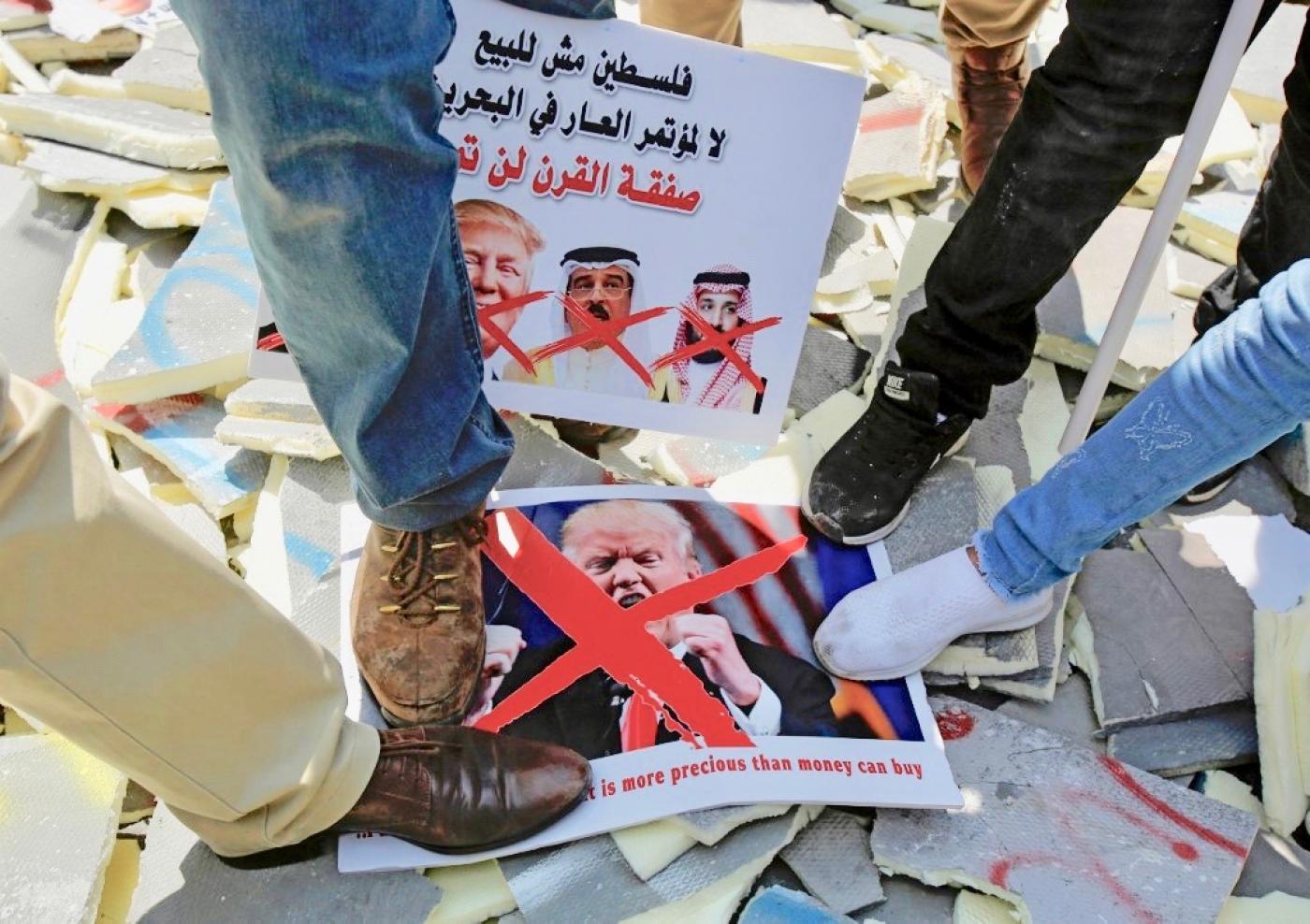 Palestinians step on posters on Sunday during the Bethlehem protest against US-led Bahrain conference. (Photo: AFP)

Palestinians are planning large-scale protests and strikes in the occupied West Bank and Gaza strip against the upcoming US-led economic conference in Bahrain. The conference is being held to detail the economic part of the US ‘peace plan’ for the region. The proposal, which the Trump administration is calling the ‘deal of the century’, claims to present a solution to the ‘Israeli-Palestinian conflict’. The US is co-hosting the international economic workshop with Bahrain in Manama on June 25 and 26.

Palestinian president Mahmoud Abbas’ Fatah party said the Palestinian Liberation Organization (PLO) factions have called for a general strike on June 25. The PA also said that it would not attend the conference, nor will it accept its outcome.

The PLO stated that the so-called ‘deal of the century’ would “enforce the Israeli occupation and erase the legal rights of the Palestinian people”. It urged the international community to boycott the event, and expressed regret at Egypt and Jordan deciding to take part in the conference. Morocco will also attend the summit. PLO spokesperson Wasel Abu Yusef also urged the Arab countries to boycott the event, saying that “the rights of the Palestinian people cannot be traded for money”.

Besides the Palestinian political leadership, Palestinian business leaders will also boycott the event, along with Russia, China, Lebanon and Iraq. Iraq’s representative Ahmad Sahhaf, while confirming its decision not to participate, stated that the rights of the Palestinian people must be protected. Israel and the US jointly decided that the former would not take part in the event.

The main purpose of the conference, according to the US, is attracting financial investment in the occupied Palestinian territories. Many world leaders and business heads from Europe, Asia and West Asia are expected to attend the event. Bahrain, Saudi Arabia, the United Arab Emirates and Qatar have already confirmed their attendance. The International Monetary Fund (IMF) and the United Nations will also participate.

Leaked versions of the deal promise substantial funding for new infrastructure projects in the region even while allowing Israel to take over substantial parts of the West Bank. Alternatively, the Palestinian Authority will be starved of funds if it does not agree to the proposal, according to the leaked reports.

Palestinians have also announced an alternative event at the same time in Beirut, Lebanon, to raise their concerns and objections to the Bahrain conference.