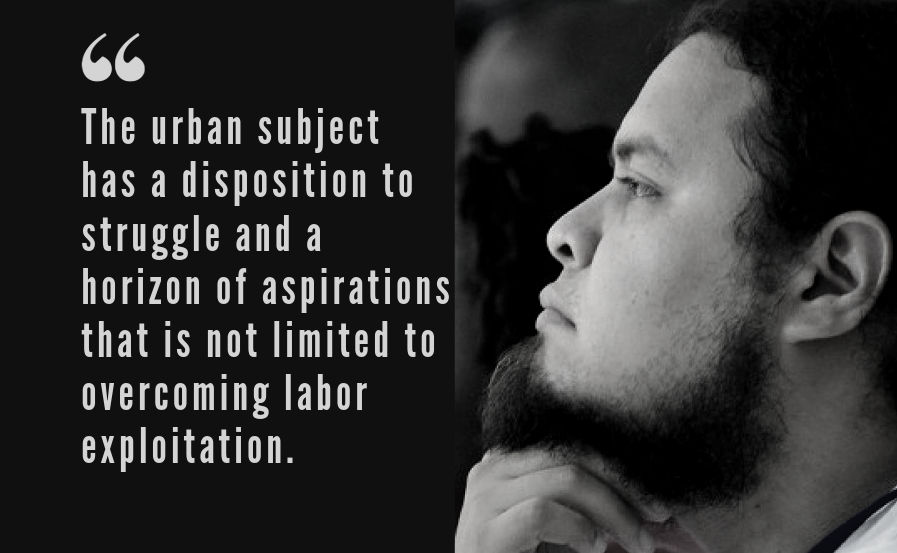 Hernan Vargas is a spokesperson for the Movimiento de Trabajadoras Residenciales [Movement of United Residential Workers] and the Venezuelan Movimiento de Pobladoras y Pobladores [Settlers’ Movement]. He also has an important role in the coordination of the ALBA social movements. His research interests include popular economies and modes of social reproduction. For many years, he has worked in popular education and organization. In this two part interview, we speak to Vargas about one of the most powerful social movements in Venezuela – a movement aimed at reclaiming urban space in the name of socialism.

Venezuela has a highly urban population, with 80 to 90 percent of Venezuelans living in cities, many in poor barrios. These barrios are spaces of informal, unplanned construction, with all the problems that that brings, from overcrowding to lack of access to utilities. Urban problems are aggravated by the concentration of ownership, sometimes referred to as the issue of the “urban plantation” (latifundio urbano). The Movimiento de Pobladoras y Pobladores[henceforth Pobladoras] operates in this contested terrain of the city and is one of the largest social movements in Venezuela. Can you explain how it works?

Pobladoras was built over time based on some key ideas. First and foremost, we organize around a common struggle against capital’s control of the city. Here, we are revising thesis of the traditional Left which conceived the struggle exclusively from the point of view of the organized working class or proletariat. In Venezuela, this conception needed updating. Our economy is a rentier capitalist one, and here the proletarian isn’t at the center of the popular struggles. In Venezuela, there wasn’t even a process of import substitution! Instead, what we have are impoverished city dwellers who live by selling their labor force in the services sector, by reselling goods in informal markets, as motorcycle taxi drivers, etc.

We have developed a hypothesis based on the practice of the different organizations in the platform – which in fact preceded the emergence of Pobladoras – and on the years of organization and debate within the movement. All of that led us to recognize that the subject of struggle is the urban poor. It turns out that this subject has a disposition to struggle and a horizon of aspirations that is not limited to overcoming labor exploitation: it also struggles for access to services, for the collective control of the oil resources, and for recuperating urban land. In sum, the urban poor struggles for the commons!

Pobladoras emerged in the context of the Urban Revolution. It holds dear to the project of advancing to socialism, through self-governance and self-organization, [appealing to] an urban subject which is committed to popular self‐rule at the local level, while building a broad, communal horizon for our society as a whole.

Pobladores has a multiplicity of roots. An important precedent is the experience of the Asambleas de Barrio [a popular, non‐traditional urban assambleary movement in Venezuela] in the ‘90s. Later, there were the CTUs, which arose during the Bolivarian Process. Additionally, we can point to international influences such as the Pobladores in Chile, the participatory budgeting in Porto Alegre and the housing coops in Uruguay. Thus, there are various roots to the movement. How does it all come together?

Pobladoras indeed has a complex origin. To make a synthesis we could say that we have three main roots that, in the last instance, are really one and the same.

First, there are the historical urban movements that have, in some way or another, participated in homesteading in the outskirts of the large Latin American cities. Although it’s true that Venezuela, due to its rentier capitalist economy, has its own particularities regarding its mode of accumulation, the forms of urbanization here are not too different from other countries of the continent. In other words, we share the problems of urban life in the Global South.

Take Chile for instance. Once production in the factories came to a halt [first during the Allende government, as a sabotage, and later due to neoliberal policies], the urban settlers (formerly factory workers) who lived in the poverty belts and shanty towns, the Pobladores, began to forcefully struggle for their right to the land. So the project shifted from being a traditional working class struggle, which was quite intense, to a very rebellious urban struggle.

The same thing happened in Argentina and elsewhere. In Uruguay, as you mentioned, there is a very active cooperative housing movement. In all of these struggles, deep patterns of cooperativism and self-management emerged, and they became key to the shaping of a political subject and a project.

As part of this whole [Latin American urban struggle], we have Venezuelan experiences such as the Asambleas de Barrio in the ‘90s, which were made up of the people who built the formal city for capital – the city of the bourgeoisie and the middle classes. On weekends, through a spontaneous process of mutual help and solidarity, these people engaged self‐organized processes of housing construction and undertook mutual aid funds… They built their homes together in the periphery of the city, helping each other.

The Asambleas de Barrio come, on the one hand, out of the common struggles that the urban poor carried out against the city of capital for access to services and against police repression. On the other hand, they come out of the experience of organizing insurgent, armed movements decades before. That is the second root.

So Pobladoras comes out of a larger tendency all across Latin America of the urban poor struggling against the “city of capital” and locally it comes out of the Asambleas de Barrio experience. What is the third root?

The third root, which is really an accumulation of many struggles, is Chavismo. The people here had a powerful tradition of struggles pitted against neoliberal logics, against the old political parties, and against the ingrained forms of doing politics. They rebelled against all forms of exclusion and mobilized around a proposal that called for a radically different national (and continental) project. That is what Chavismo was about at the beginning.

From there emerged very interesting projects such as the Mesas Tecnicas de Agua [barrio-level organizations for getting access to running water]. We are talking about an early period in the Bolivarian Process, the time of “councils,” when communities organized to figure out how they could connect with the project of the 1999 Constitution. What I mean is that, if the Constitution promised universal access to education, then people organized to make that happen. They began to look for spaces in the barrio where classes could be taught with the collaboration of Cuban educators. Thus, the constitutional right combined with local efforts of organization guaranteed that millions of people attained literacy or graduated from high school or college.

The same thing happened with the issue of urban land ownership. At that time the urban poor found themselves faced with a constitution that grants the right to housing, and laws that in principle regularized the land tenancy of the plot of land for that 60 percent of the population living in the barrios. To say the obvious, the system isn’t going to spontaneously make those rights tangible and that is when the organization came in.

Thus, the urban poor organized to do cadastral surveying [mechanism for identifying property using land registers]. and to record the local histories of the barrio… That is where Pobladoras took shape. Yet it came forward with a project that wasn’t limited to regularizing land ownership for the excluded urban subject that lives in the barrio. Pobladoras also addressed the problems of people who face precarious rental situations, residential workers, building occupiers, etc. We all came together in a movement that extended a hand to any exploited subject struggling for these common objectives. In Chavismo, there was an urban social base that was a synthesis of all those struggles.

For a movement like Pobladoras, it’s important that there is a government that is sympathetic to popular, self-managed initiatives. That is to say, there is a dialectical relation between, on the one hand, the urban subject, composed of collective and diverse forces that come from below, and, on the other hand, state power that is willing to work with the popular movement.

The Pobladoras’ roots are not only those of the movement. They are, in fact, the same roots of Chavismo and of the Chavista government. Acknowledging that the government is not homogeneous (it’s no secret that this government has a polyclassist composition, though perhaps not as polyclassist as the formerly progressive governments of Brazil or Argentina), we find that within the government there is a current that has a strong commitment to the people. Of course, and this goes without saying, the strength of this current has varied.

A couple of years ago, Nicolas Maduro said that there have been different periods in the Bolivarian Process, and that we should study them. If we do so, we observe that not only has the government wavered, but also popular organizations have had their ups and downs.

What is unquestionably true, however, is that beginning with the coup against Chavez in 2002, we realized that the bourgeois state and status quo would not allow for universal access to education, healthcare, or the land. From then on, there was an awareness that popular organization was the only means (combined with a favourable legal framework and sympathetic constituted power) for achieving our objectives and making good on the rights embodied in the constitution.

For instance, the UN recently recognized Venezuela for its policies of social inclusion regarding housing rights. In these last few years, 2.6 million houses have been built. Of those, close to one million, some 37%, have been built by popular power [indigenous communities, Mision Ribas (educational project), Campamentos de Pioneros, and Communal Councils].

That is an important experience, because it shows how the combination of many historical struggles led to a new way of making housing. Those who in the past built their own houses with mutual collaboration but without state support… today those same people are empowered through laws: they have the possibility of occupying land and receiving financial support and technical aid. In this way, they achieve their objective.

It’s an objective that was not the result of clientelist practices, but rather one that was attained through a long and organized struggle that had to navigate, among other things, the diverse composition of the government. That is to say, it emerged in a context where at the top, some believe that socialism is merely a more fair distribution of the rent, which is more or less a rehashing of the old Venezuelan capitalist model. By contrast, there are those of us who believe that socialism means social production to satisfy social needs, a focus on the people, and popular self-management in an effort to construct something new.

(The article first appeared in Venezuelanalysis.com)