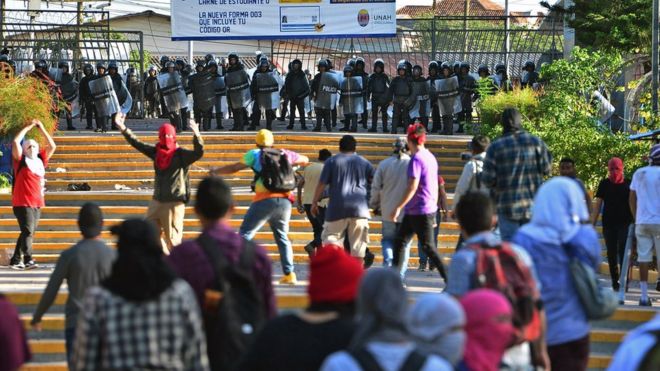 Police attack students at the National Autonomous University of Honduras

On Monday June 24, dozens of agents from Honduras’ Military Police for Public Order invaded the Tegucigalpa campus of the National Autonomous University of Honduras and fired on the students with live bullets. The attack was a serious violation of both the students’ human rights and the autonomy of the university. The attack severely injured at least six people while dozens were affected by tear gas. On Tuesday, the police violently repressed a student mobilization in San Pedro Sula.

Students in Honduras have played a central role in the protests against the privatization measures in the public health and education sectors that have been taking place across the country since early May.

Hernández, accused the students organized with the University Students Movement (MEU) of being guided by “Chavista manuals”.

The massive mobilizations in Honduras have moved beyond anti-privatization slogans and have demanded the resignation of president Juan Orlando Hernández. Last week, road blockades were erected on major highways across the country and mobility in the capital Tegucigalpa and in points across the country was paralyzed. In response to the intensification of the protests, President Hernández announced on June 20 that police, military and intelligence forces would be deployed across national territory to “guarantee the right to free movement”.

The deployment of military forces has worsened the already brutal repression. According to the Coalition against Impunity, in the past week of mobilizations, at least six people have been assassinated.

June 28 is the 10th anniversary of the military coup which overthrew democratically elected Manuel Zelaya and initiated a process of intense neoliberalism and suppression of human rights. The election of Hernandez in 2017 in an election widely seen as rigged was part of this process. The people of Honduras see the government of Juan Orlando Hernandez as illegitimate and in the coming days, are likely to mobilize in larger numbers against this repressive government.