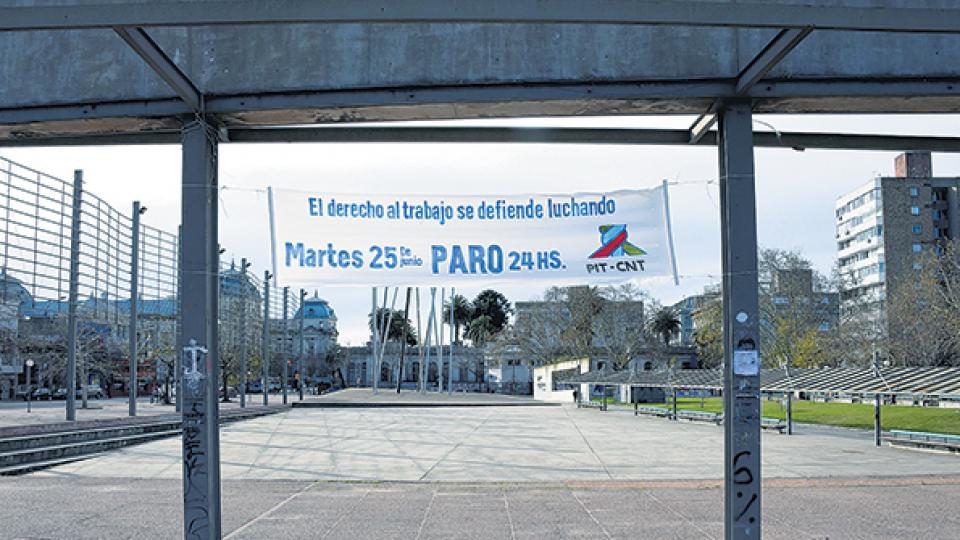 “The right to work is defended by fighting” reads the banner. Photo: AFP

On June 25, under the banner of “the right to work is defended by fighting”, hundreds of thousands of healthcare, education, banking, transportation and construction workers as well as public employees across Uruguay stopped their activities for 24 hours and brought the country to a standstill. Primary and secondary education workers as well as university teachers adhered to the strike as well as public and private healthcare professionals. In the transportation sector, only emergency transportation facilities were available. Most businesses remained closed. The roads and street across the country were deserted.

The strike was called in solidarity with the workers of different sectors that are struggling for their rights. In particular, with the workers of MontevideoGas company, who have been fighting in defense of their jobs since the last week of April. MontevideoGas is owned by a Brazilian oil and gas distribution company Petrobras and has been operating in Uruguay since 2004. On April 26, Petrobras announced its departure from the country on the pretext that they were incurring losses. The company announced that it would dismiss around 40 of its employees in the near future and refused to renew the unemployment insurance of over 20 workers. Since the announcement, it has dismissed 11 workers.

Since June 10, gas workers across Uruguay have been on an indefinite general strike in support of the MontevideoGas workers. The Autonomous Union of Gas Workers and Employees (UAOEGAS) which called for the strike is demanding the re-incorporation of the dismissed workers and the renewal of the unemployment insurance of all the workers. It is also demanding that the government revoke the license to the commercial exploitation of gas granted to Petrobras in 2004.

The strike was also held in condemnation of the decision of the International Labor Organization (ILO) on wage bargaining, which violates workers’ rights and allows employers to revise the collective bargaining law. This jeopardizes the bargaining rules conquered by the working population after countless struggles.