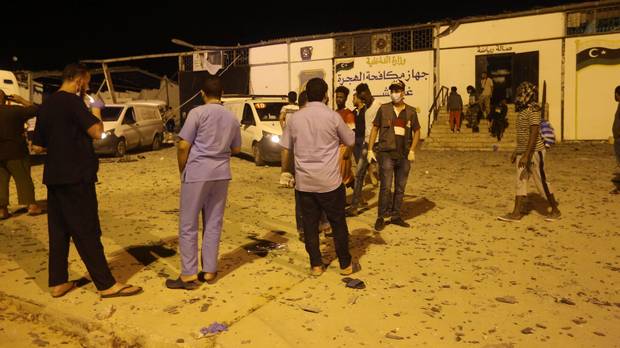 Workers gather at a detention center after an airstrike in Tajoura, east of Tripoli Wednesday. Photo: Hazem Ahmed/AP

At least 44 people were killed in an air raid on a detention center for refugees and migrants near the Libyan capital Tripoli yesterday, July 2. The attack also left more than 80 people wounded and the death toll is expected to increase. The United Nations has said that the attack could be considered a war crime.

The internationally recognized Government of National Accord (GNA) blamed the General Khalifa Haftar led Libyan National Army (LNA) for the attack. However, LNA has denied its responsibility and has instead blamed GNA forces for shelling the detention center after LNA carried out a precision attack on one of the military camps in the area.

These detention centers are surrounded by military camps and as such they are under constant threat of coming under the crossfire between the warring factions. Since April, the war between the GNA and the LNA has intensified after the LNA began a campaign to capture Tripoli.

Khalifa Haftar, the leader of the LNA, was a close aide to Maummar Gaddafi, the long serving military ruler of Libya who was overthrown in a NATO led attack in 2011. Haftar was living in exile in the US after his fall out with Gaddafi, during which he lobbied for the US intervention in Libya. In the chaos created after Gaddafi’s removal and assassination by the NATO forces, Haftar returned to Libya and became a warlord.

Today Haftar claims the support of the House of Representatives (HoR) government based in the eastern town of Tobruk. HoR claims to be the legitimate parliament elected in 2014 under the UN monitored elections. This elected Parliament moved to Tobruk because the General National Congress government formed after the removal of Gaddafi was holding Tripoli and it refused to recognize the newly elected body. A new Government of National Accord consisting of a 9 member Presidency Council was formed after the signing of the Skhirat Agreement, in Morocco, which was initiated and facilitated by the UN in December 2015. However, the elected members based in Tobruk have refused to recognize GNA. Today, the Parliament or the Tobruk government is backed by regional powers Egypt, Saudi Arabia and UAE whereas the government in Tripoli is recognized by the UN and other countries.

Haftar has been recognized as the commander of the army loyal to the Tobruk government, the Libyan National Army. He has been successful in consolidating most of the eastern and southern parts of the country under the control of the LNA since 2014, defeating ISIS forces and taking control over the crucial oil fields. In April, just before a UN sponsored talk between all the parties in Libya was to be organized, the Haftar-led forces scaled up military actions in order to capture Tripoli.

Mohammad al-Manfour, a commander in the LNA issued a statement on July 1 where he had warned that they would step up the air strikes. He stated that “traditional means” to “liberate Tripoli” have been exhausted. The LNA lost Garyan, a town near Tripoli last week to GNA forces. Haftar blames Turkey for providing arms to GNA forces and securing their victory, and gave a call to attack Turkish ships and citizens inside Libya last week.

After the capture of Garyan, GNA forces claimed they have captured weapons from Haftar’s forces. These weapons were allegedly supplied by the UAE in violation of international arms trade treaty. UAE gets most of their weapons from the USA.

The war in Libya, a result of regional and global desire to control its natural resources, has claimed thousands of lives and displaced almost a million people since 2011.