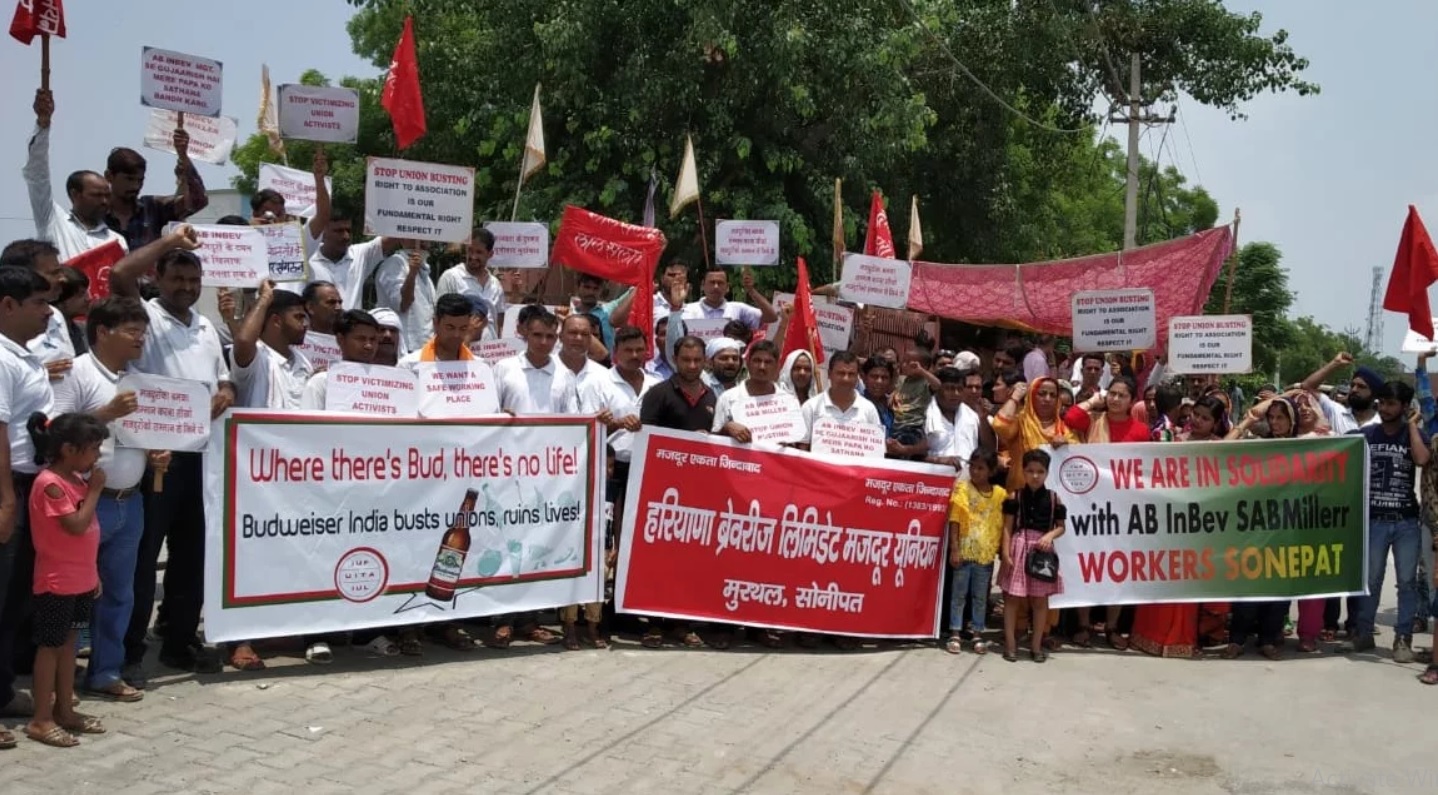 The workers of the brewery and their families stage a protest for 12 hours a day against the management.

The protest by workers of the Sonipat brewery plant of Anheuser-Busch (AB InBev) in the Indian State of Haryana has crossed 500 days.  The workers are protesting the illegal termination of employment of union leaders, withdrawal of union recognition, and the management’s refusal to discuss the demands of the union. Their struggle is being conducted under the banner of Haryana Breweries Ltd Mazdoor Union (HBMU).

On July 8, the independent union said in a statement that the workers would continue to put pressure on the management to stop the victimization of its members. They are also seeking the reinstatement of the union committee members who were fired three years ago.

The Belgian-Brazilian company AB InBev is the world’s biggest beer producer. The company has 500 beer brands in over 100 countries, including Budweiser and Corona. In India, the company has 17 operational units.

Most permanent workers at the Sonipat brewery earn around INR 20,000 (USD 291) per month, which is half of what their colleagues at the brewery in the city of Aurangabad earn. One of the major reasons for the low pay is the lack of unionization which would have enabled workers to demand higher salaries.

In 2016, the workers tried to revive the HBMU which had fallen dormant. The workers completed all the necessary procedures. However, AB InBev’s management refused to recognize the union and forcefully removed six people. Four of the six, including the then general secretary and president of the union, were fired and two were suspended.

Deshraj Yadav, the then general secretary of the union, said he was removed by the management on fake charges. “I was selected for a promotion along with six others. I refused the promotion offer, since I had by then been appointed the general secretary of the recently revived union. The management, in retaliation, terminated me on charges of fraud. They claimed that the education degree I had submitted was not from a UGC or AICTE-affiliated college. (UGC and AICTE are bodies which certify and regulate education in India). However, the six other workers who submitted degrees from the same college were promoted,” he said.

Members of the union also feel betrayed by the Bhartiya Mazdoor Sangh (BMS), which is affiliated to the Hindu nationalist Rashtriya Swayamsevak Sangh (RSS), the parent organization of the India’s ruling Bharatiya Janata Party (BJP). The BJP came to power in the State of Haryana in 2016 and in order to advance their cause, the HBMU decided to seek affiliation with the BMS. However, a year later, the BMS allegedly joined hands with the management and eventually played a major role in breaking the unity of the HBMU, according to union members.

Attack on the union

In April 2018, there was an attack on a peaceful protest by the union outside the Sonipat government office. Workers say that the management orchestrated the attack, in which a committee member was gravely injured. However, the management filed a false police complaint against union members for alleged assault which resulted in the arrest of the union leadership. The arrested leaders were released on bail but the harassment against them persisted. As many as 12 cases were later registered against the union and its members.

Meanwhile, the HBMU secured the support of the International Union of Food, Agricultural, Hotel, Restaurant, Catering, Tobacco and Allied Workers’ Associations (IUF). The IUF is currently representing HBMU in a case filed against AB InBev India in the Belgium court of OECD Watch, a global network that forms guidelines for multinational enterprises regarding business conduct in their worldwide operations.

The plant currently operates 24 hours a day. Permanent employees work in three shifts while contract employees, who are in the majority, work in two shifts.

For the past 500 days, the permanent workers have been completing their eight-hour shifts and then joining the protest group for another four hours. Their family members have also joined the struggle and a protest camp is run for 12 hours every day. Though contract workers earn significantly less than permanent workers, they have not taken part in the protest for fear of losing their jobs.

While the management has shown a complete indifference to the demands of the workers, the protest has received support from farmers and students’ unions  in the area, creating an admirable example of a community coming together to express solidarity with the struggles of its members.