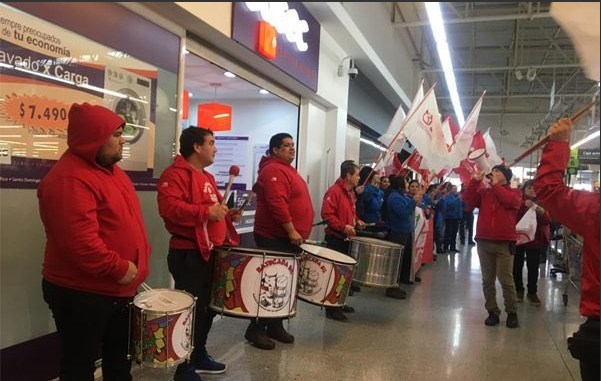 Workers of Walmart Chile demonstrating outside one of its supermarket outlets. Photo: Politika

On July 10, more than 17,000 workers, working in more than 350 stores of various supermarket chains owned by Walmart across Chile, went on a strike and mobilized in defense of their labor rights. The workers are demanding an increase in salaries and reincorporation of all the workers who will be unemployed in the coming months after the digital transformation of the company. The strike was called for by the Sindicato Interempresa Líder (SIL), a trade union of Walmart workers in Chile.

Walmart owns over 371 stores under the brand name of Líder, Hiper Líder, Express de Líder, Ekono, Acuenta and Central Mayorista supermarkets across Chile. Due to the strike, about 130 of these supermarkets remained closed, while more than 100 operated for half day. The action was the largest private sector strike that Chile has seen in years.

Through social media networks, the union urged common people to support the workers and not to shop at these supermarket outlets on the day of the strike.

Walmart Chile is undergoing a digital transformation. It is planning to substitute cashiers with automatic cash registers, which will lead to the unemployment of over 3,000 workers in the coming months. The workers are demanding the reincorporation of the workers -who will be unemployed- within the same supermarket chains on other positions.

They are also demanding an increase of 4% in salaries. Walmart is currently offering a raise of 3% with a fixed bonus of 50,000 pesos or USD 72.

The strike was originally planned to be carried out on June 3, however, it was suspended after the company requested for a mediation on the same day. After the negotiations between the workers and the company failed, the president of the SIL, Juan Moreno, announced that they would begin the strike.

“We have finished the mandatory mediation meeting, we have not reached an agreement. We recognize that there was some progress, but it was not enough to reach an agreement,” said Moreno. “We understand that automation is something that comes and is inevitable, but we want guarantees for the workers who are going to suffer from it,” he added.

Last month, in a voting process held on June 25, 26 and 27, the supermarket workers rejected Walmart’s offer with an overwhelming majority of 95% and decided to go on a strike if their demands were not accepted.