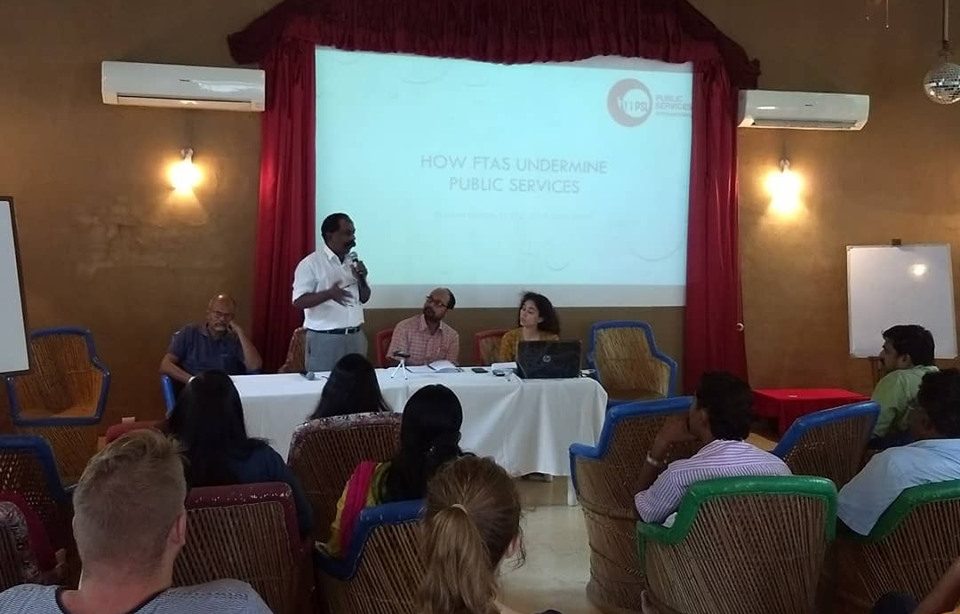 Activists and researchers discussed the impact of nearly three decades of neoliberal policies on the Indian economy. Photo: Benny Kuruvilla

With the Indian government in closed-door negotiations with countries in the Asia Pacific over a proposed multilateral free trade agreement (FTA), people’s movements in the country are looking for ways to mount a resistance to it. The Regional Comprehensive Economic Partnership (RCEP) is a proposed free trade agreement between the ten member states of the Association of South-East Asian Nations  (ASEAN) and Australia, China, India, Japan, New Zealand and South Korea.

The Indian government has been conspicuously secretive about the negotiations, with no details available about the key negotiators at the forum or many of the issues discussed. Several activist groups working on trade justice have thus called on various movements working in sectors that stand to be affected by RCEP to come forward and create an action plan against it.

It was this context that the National Conference on Trade and Investment was held in the capital Delhi. Representatives of over 40 organizations across India, including trade unions, fisherfolk unions, farmers’ movements, hawkers’ unions, indigenous activists, women’s rights movements and public health advocacy groups took part. The conference was organized by the Forum Against Free Trade Agreements, along with Focus on the Global South (Focus), Public Services International (PSI), Third World Network (TWN), Medecins Sans Frontieres (MSF), IT for Change, Madhyam, and, the Indian affiliate of the People’s Health Movement, Jan Swasthya Abhiyan (JSA).

At the three-day conference, representatives of these organizations talked about the issues that their sectors face after nearly three decades of neoliberal policies. They also debated strategies to build a countrywide movement against not just RCEP, but also trade liberalization.

Some of the scholars present at the conference detailed India’s capital outflows and its trade deficit that ran into hundreds of billions of dollars in the past three decades. Many pointed out the failed experiments India had had with its FTAs with Sri Lanka and ASEAN, especially the latter.

Smitha Francis, a researcher affiliated with the Institute of Studies in Industrial Development in Delhi, demonstrated how India’s trade deficit has widened ever since it gradually opened up to ASEAN in 2003. The same was echoed by Susana Barria, an activist associated with PSI, who pointed out that nearly two-thirds of India’s trade deficit is with the countries that it is already negotiating RCEP with. According to Barria’s own research, the trade deficit with China, Japan, Australia, New Zealand, South Korea and ASEAN has risen to USD 105 billion in the fiscal year 2017-2018.

Activists and trade unionists also shared their experiences with market liberalization that successive governments have advocated. Harish Chauhan of the Fruit and Vegetable Association of Himachal Pradesh said that policies geared towards globalization had flooded India with foreign produce, at the cost of local producers. Chauhan, who is an apple farmer in the north Indian state of Himachal Pradesh, said, “Around 40% of the apples sold in Indian markets are imported.”

Speaking of the impact of market liberalization on public services and public enterprises, Jammu Anand, leader of the Nagpur Municipal Corporation Employees Union (NMCEU), said that municipal governments across the country were pushing for privatization of their duties through contracting and subcontracting. Komal A. of the same union, while describing her organization’s successful fight for the minimum wages of informal workers under private contractors, said that close to three-fifths of municipal work had been outsourced to private contractors.

Fatima Burnad, an activist leading the India chapter of the Asia Pacific Forum on Women Law and Development, spoke of the systemic and physical manifestations of violence that peasants and oppressed groups suffer because of liberalization. Burnad, who has worked on the role of women in the informal economy and from oppressed castes in southeast India, spoke of displacement caused by special economic zones (SEZs) that have come up in several parts of India since 2000. Dalit women (from the castes once considered untouchable), who are often agricultural workers or farmers on government-leased lands, lost livelihoods with the setting up of SEZs in their vicinity. The resultant drastic change in land use patterns killed local agriculture, forcing many of these workers to toil in SEZs to earn a living.

SEZs are specifically designed to attract foreign investment and hence, labor laws and environmental norms are often waived to various degrees. Burnad added that often, the displaced women employed in SEZs earn a pittance and are victims of sexual abuse.

Data sovereignty and intellectual property was also an area of concern raised by several participants. Parminder Jeet Singh of IT for Change, a data privacy activist, flagged the issue of how India had forsaken a large part of its data privacy as it welcomed online retail and aggregator giants like Amazon and Uber. Singh also spoke of how data is crucial today on several matters, including health and innovation, and that no free trade agreement signed by India has ever dealt with such matters, despite how crucial data has become to trade.

Building on the question of data and intellectual property, Leena Menghaney of Medecins Sans Frontieres spoke about the lack of public knowledge on whether the current RCEP negotiations include any concessions on India’s progressive intellectual property laws. According to her, considering that Japan, a crucial party to the negotiations, has been at the forefront of isolating India’s progressive legal interventions on drug patenting and seed patenting, the secrecy of negotiations threatens India’s already fragile public health security.

On August 1, the participants brainstormed strategies to build a pan-Indian movement against RCEP and pressurize the government for more accountability. It was agreed upon that a mass education movement is a prerequisite to building alliances among small merchants and enterprises, students and young workers. A decision was also made to petition State governments and parliamentarians, especially ahead of the the next multilateral round of negotiations that is scheduled by RCEP nations on August 29-30 in Japan. The organizations will also issue a joint statement of protest to all members of parliament.