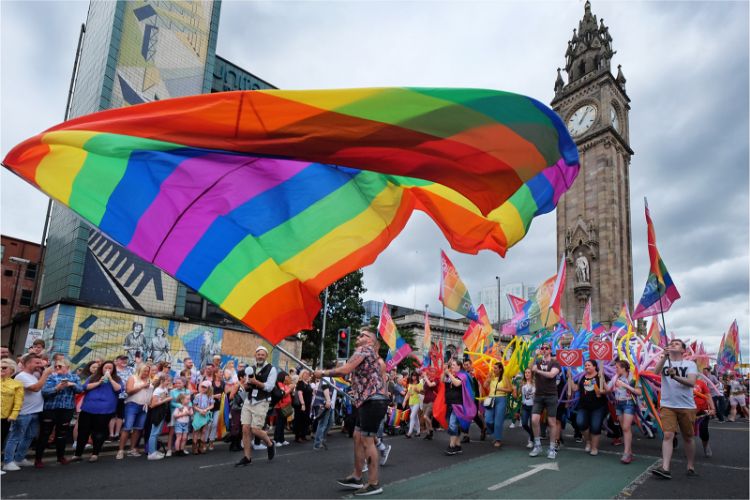 The pride parade was organized under the banner 'Rights Now.'

On August 3, tens of thousands of people participated in the Belfast Pride Parade 2019 in Northern Ireland. Braving the rain, people from different age groups and professions joined the march. The parade was part of the 10-day long annual celebration, the Belfast Pride Festival 2019, which started on July 26. It was organized under the banner ‘Rights Now’, in order to highlight the rights that are still denied to the LGBTQ community in the region.

The parade began from the Custom House Square and advanced through the city center. According to reports, Belfast mayor John Finucane hoisted the first Pride flag from the roof of City Hall. Prior to this, the rainbow flag was carried down the Belfast Lough on a flotilla of boats. The parade was the culmination of almost a hundred events organized over a span of 10 days as part of the festival.

The organizers said that the Belfast Pride Parade is the biggest cross-community parade in Belfast and the single biggest parade in the city. It is the main event in the LGBTQ calendar and one of the key events in the Belfast Pride Festival. It is a protest as well as a celebration, a call for equality and solidarity, and a celebration of the LGBTQ community in Belfast.

Activists from the Belfast committee of the Connolly Youth Movement also took part in the pride march.

Northern Ireland has trailed behind other parts of the United Kingdom on the issue of LGBTQ rights. In 2017, the International Lesbian Gay Bisexual Trans and Intersex Association (ILGA) said Northern Island had 74% equality of rights as compared to 86% in the United Kingdom overall and 92% in Scotland.