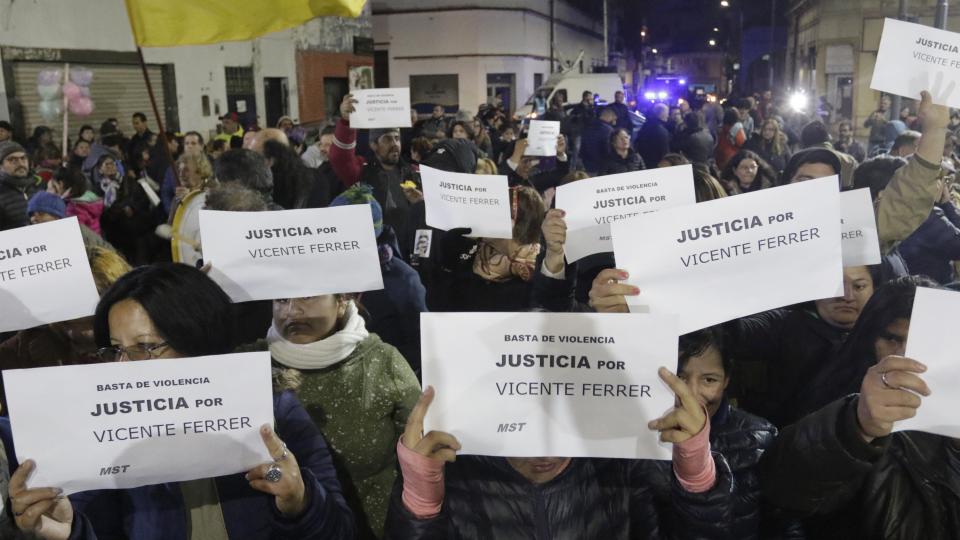 People from the San Telmo neighborhood in Buenos Aires, demand justice for an elderly man beaten to death after being accused of stealing food.

On August 22, over a thousand people from the San Telmo neighborhood in the capital city of Buenos Aires, demonstrated outside a Coto supermarket, to repudiate the killing of Vicente Ferrer. 70-year-old man was beaten to death by the store’s security guards. The authorities have confirmed that Ferrer died of “a head injury”, which caused a stroke.

On August 17, when Ferrer was leaving the store with a bottle of oil, a packet of cheese and a chocolate bar, without payment, the security guards began beating him. They accused him of stealing the merchandise, without giving him an opportunity to explain. He was dragged several meters away from the store and left lying on the sidewalk, where he eventually died. The two aggressors have been arrested and stand accused of murder.

According to neighbors, Ferrer suffered from senile dementia and lived by himself. The death has, once again, highlighted the brutality of the economic crisis in Argentina. Due to rampant inflation and the lack of adequate government policies, basic food products are becoming increasingly inaccessible for the majority of the Argentine population. The lack of resources and mounting desperation is forcing people to perpetrate such unfortunate incidents, the situation being more difficult for old and retired people, like Ferrer.

Given the high food shortages in the country, for the past few weeks, anticipating incidents of theft, many supermarkets have prohibited customers from entering with bags. In other cases, guards at the entry and exit of stores are instructed to check customers’ backpacks more thoroughly.

According to a recent report, “The State of Food and Nutrition Security in the World 2019”, released by the Food and Agriculture Organization of the United Nations (FAO), the United Nations Children’s Fund (UNICEF), the World Health Organization (WHO), the World Food Program (WFP) and the International Fund for Agricultural Development (IFAD), the number of people suffering from “moderate or severe food insecurity” in Argentina increased from 8.3 million, between 2014 and 2016, to 14.2 million, between 2016 and 2018. Within the report, “moderate food insecurity” signifies the condition where people are uncertain about their ability to obtain food and are forced to reduce the quality or quantity of their food due to lack of resources.“Severe food insecurity” refers to a level at which people have run out of food and are suffering from acute hunger, spending days without eating food.

On the same day as the demonstrations protesting the killing of Ferrer, several marches, people’s pots (community canteens) and people’s assemblies were held by trade unions, left-wing political parties and social movements throughout the country, demanding measures that would guarantee access to basic necessities, in the face of heavy inflation. The condition has worsened with the further devaluation of the Argentine Peso following the primary elections in the country.

Dozens of movements and organizations have come together to plan and hold a ‘national struggle day’ on August 28, to demand concrete measures for the working classes as well as an increase in salaries and pensions.