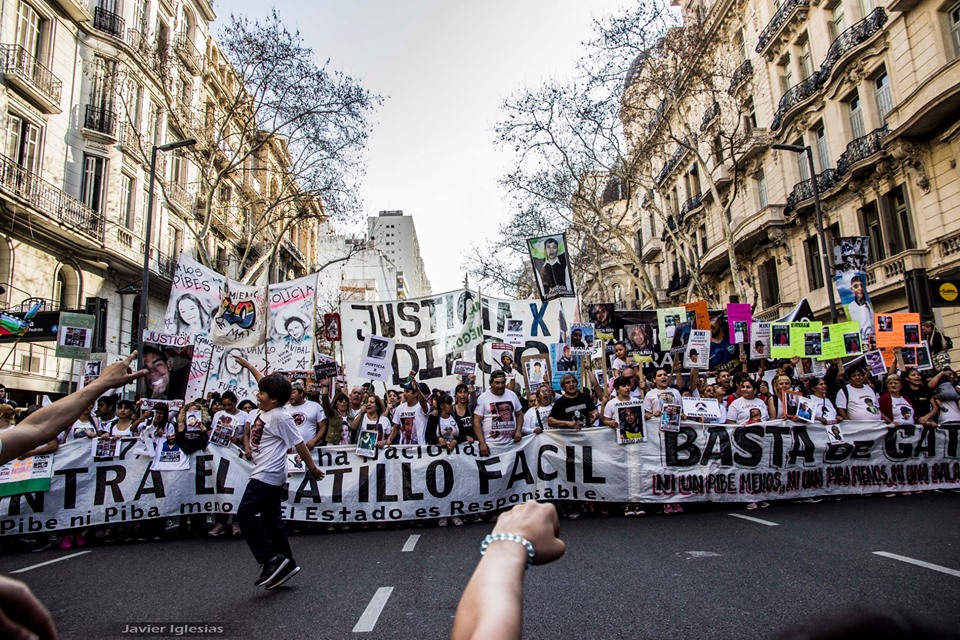 On August 27, tens of thousands of people across Argentina took part in the Fifth National March against ‘Trigger-Happy’. They mobilized against state violence with banners that said “Enough of trigger-happy. Not a boy or a girl less, not a bullet more. The State is responsible!”

In Buenos Aires, relatives and family members of the victims of violence of the Argentine Police Forces, along with a large number of citizens and activists from social, human rights and political organizations, marched from the National Congress to Plaza de Mayo, in rejection of police repression, arbitrary arrests and enforced disappearances.

The demonstrators marched with banners and placards displaying photos of people that have been arbitrarily detained, tortured, killed, or have disappeared during the recent years, to demand justice for them and raise awareness against impunity. They raised slogans such as “Enough of trigger-happy”, “Enough of torture and deaths in prisons, police stations and juvenile institutes”, “Enough of enforced disappearances”, “Enough of arbitrary detentions”, “Freedom for political prisoners”, “No to the Criminal Code reform and the implementation of ‘Chocobar doctrine” and “Not one less, even in prisons”, among others.

Similar mobilizations were witnessed in other parts of the country, such as Mendoza, Córdoba, Rosario, Corrientes, Posadas, Jujuy, and Mar del Plata. Mobilizations also took place in the city of La Plata the previous day.

The mobilizations were called by the initiative Marcha Nacional contra el Gatillo Fácil (National March against Trigger-Happy). The movement is comprised of the relatives of victims of trigger-happy use of firearms. In 2015, the first set of marches were held in Buenos Aires to denounce cases of trigger-happy, led by the relatives of Ismael Sosa, a 24-year-old boy who was found dead in the Embalse Río Tercero lake in January 2015. He had left home to attend a concert in Villa Rumipal and never came back.

This is the fifth national march to denounce state violence, which has left around 6,500 young people dead since 1983, which amounts to one person every 21 hours. The number of cases have increased during the current right-wing government of Cambiemos party, led by president Mauricio Macri.

The protesters categorically repudiated the policies of minister of security Patricia Bullrich, who legalized trigger-happy use of firearms, implemented repression as a clear state policy, and explicitly defended the illicit actions of the security forces under the “Chocobar doctrine”.

‘Trigger-happy’ is an officially sanctioned policy for the use of firearms that enables security forces to shoot at suspects, armed or otherwise, irrespective of whether they have been judicially proven guilty of a crime or not. The Chocobar doctrine, that regulates the use of firearms by all members of the federal security forces, allows police to shoot without identifying themselves, shoot at the back, and kill with fewer restrictions. It is named after a famous case in which a police officer, Luis Oscar Chocobar, shot and killed a man who had robbed a tourist.