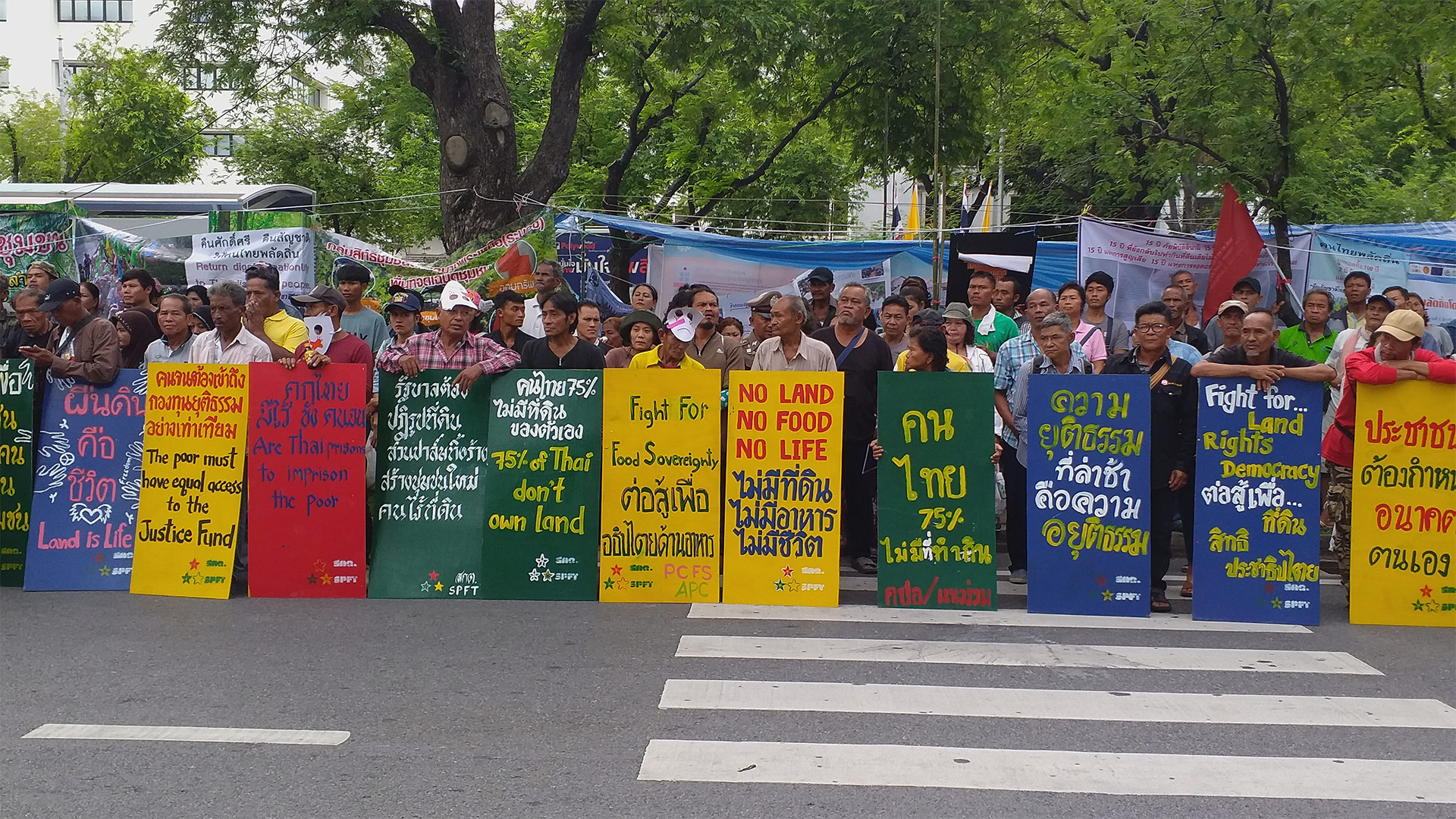 Hundreds of peasants and members of slum dwellers communities, under the banner of People’s Movement for a Just Society (P-move), organized a protest demonstration outside the United Nations office in Bangkok, from September 9 to 12, calling for the restoration of democracy in Thailand. The peasants are demanding land rights and an end to the evictions and killings of farmers. Additionally, threats to the member organizations of the P-move and the filing of lawsuits against them must be stopped by the state authorities. The movement, in a statement, has claimed that the issue of poverty is based on the structural social inequality in the country and the current development policies of the state. It also noted that to alleviate people’s suffering, a sustainable and just society needed to be established with a focus on the welfare state.

The protesters furthered demanded revocation of all orders of the former National Council for Peace and Order (NCPO), including those restricting political freedom in Thailand. NCPO, a military-led governing body was formed after the 2014 coup which overthrew the democratically elected government of Yingluck Shinawatra. Soon after, NCPO passed several orders curbing the freedom of the media and political dissent. Officially, the NCPO saw its end in May, after the elections. However, many critics have argued that despite it being dissolved as an authoritative body, the NCPO remains intact with its powers being exercised by the existing Internal Security Operations Command, chaired by the prime minister. Ending the killings of farmers and the threats of legal action are the two major demands of the peasants. In recent years, many farmers and members of peasant organizations have been killed by land mafias and henchmen of the palm oil industry. Since 2010, four members of SPFT’s Klong Sai Pattana occupation farm, in southern Surat Thani province, have been allegedly murdered by owners of palm oil plantations. Organizations like the SPFT are engaged in the occupation of untilled and unused government land, in order to establish farming communities. Some of these areas have been illegally taken over by the land mafia.

Apart from the threat to their lives, the members of these organizations also face legal intimidation and harassment by the authorities. According to reports, hundreds of lawsuits have been filed against these organizations for “exercising their rights” based on the concept of the ‘land to the tiller’. The P-move demands that the government form adequate policies for national resource management and disaster management, while ensuring the protection of ethnic groups and stateless people.

Negotiations between the P-move and government

Government representative from the prime minister’s office Dhevan Liptapanlop, along with members of relevant government agencies met the demonstrators on September 12, following three consecutive days of protest. Subsequently a committee was formed under Prime Minister’s Office Order No. 246/2562 (2562 is the year 2019 according to Buddhist calendar) to look into the demands put forward by the protesters. The committee is constituted by representatives of the P-move and members of various government departments. With a total membership of 35, it is headed by the deputy prime minister Wissanu Kreangam, with Liptapanlop as the vice president. The P-move will be represented by movement leaders, Prayong Doklamyai and Maitri Jongkrajak. According to the order, the committee will meet within 30 days from the date of appointment.

The government has also agreed to stop or delay all pending prosecution proceedings and lawsuits against members of the P-move. In the statement released by the movement it has been hoped that the committee will seriously address the peasants’ demands. A failure to do so would result in future mobilizations by peasants’ organizations.