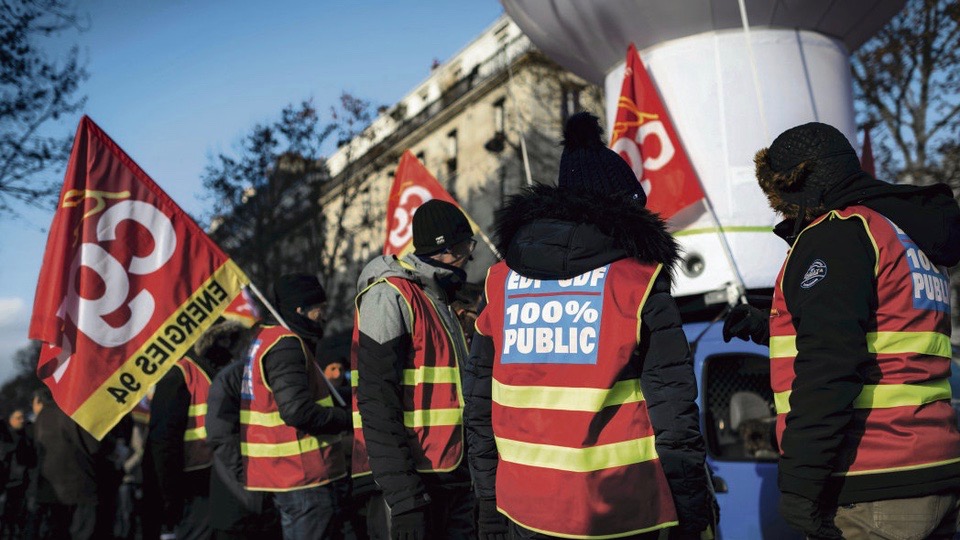 The trade union Confédération Générale du Travail has denounced the government’s financial operation Project Hercules, intended to bifurcate the majorly state-owned Électricité de France and open it up to privatization by up to 35%. (Photo: L’Humanite)

Workers of the electricity sector in France went on strike on September 19, protesting the government’s plans to bifurcate the largely state-owned electrical utility company, Électricité de France (EDF). The call for the strike was given by several trade unions, including the Confédération Générale du Travail (CGT), the French Democratic Confederation of Labour (CFDT), the Workers’ Force (FO) and the French Confederation of Management – General Confederation of Executives (CFE-CGC). A massive rally was organized in Paris in front of the Ministry of Ecological Transition.

The proposal for the bifurcation of EDF has been termed as ‘Project Hercules’ and was announced by the company’s CEO Jean-Bernard Levy, on June 20. It has been denounced by the CGT as a highly financial operation, based on the idea of isolating the risky nuclear division from the rest of the EDF’s activities, to encourage capital inflow in the latter and privatization.

According to the current plan, the EDF will be divided into two entities, the EDF Bleu, which will regroup the controllable production of electricity (nuclear, hydraulic etc.) and the EDF Vert, which will handle the most profitable activities, which include EDF’s renewable energy operations and its sales department, with a target to privatize up to 35% of EDF Vert’s entities.

Jean-Paul Rignac, director at EDF who is representing the employees as a member of the CGT, said that “Today, all financiers are opting for new energy because they benefit from subsidized contracts over decades, where the price is guaranteed.”

“For employees, the project “Hercules” endangers their jobs, especially through the outsourcing of certain activities,” he added. He pointed out that the employees may lose the status of IEG (electric gas industries worker) which ensures a number of social services and guarantees from the employer.