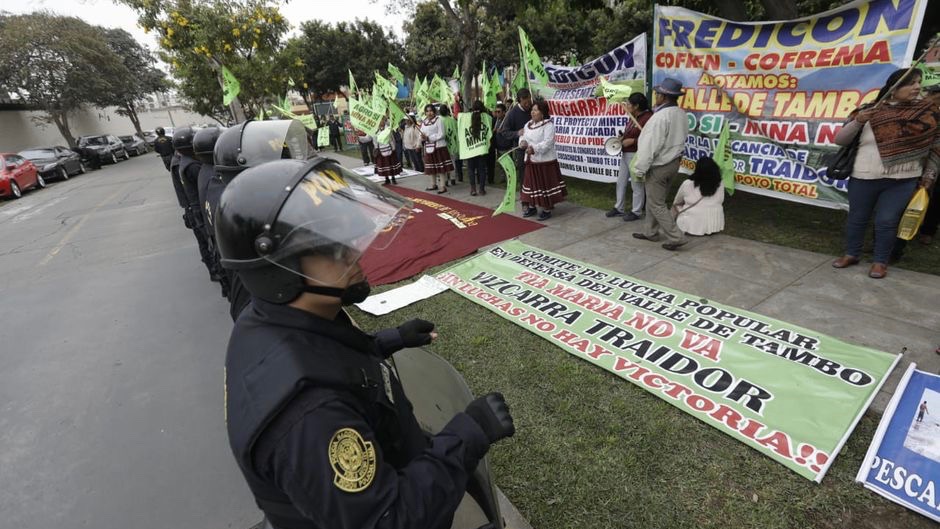 Over 100 protesters peacefully demonstrated demanding the cancellation of the Tía María mining project outside the Ministry of Energy and Mines in Lima on October 7.

On October 7, the Peruvian Mining Council of the Ministry of Energy and Mines (MINEM) held a public hearing to hear three revision appeals regarding the resolution that authorized a license to the Mexican mining company, Southern Copper Corporation (SCC). The license is to begin the construction of the long-resisted Tía María copper mining project, located in the Tambo Valley, in the Islay Province of Arequipa region. The Mining Council is the administrative jurisdiction that resolves mining related issues in the country.

The revision appeals were made by the regional government of Arequipa, the Tambo Valley Users Board and the Front for the Defense of Minority Workers and Shareholders of the Chucarapi Sugar Mill Pampa Blanca SA and Annexes.

Over 100 protesters from the Tambo Valley came to the capital Lima and peacefully demonstrated outside the headquarters of the MINEM in support of their representatives.

In defense of the Regional Government of Arequipa, lawyer Walter Paz Valderrama highlighted a number of facts that prove SCC’s illegality to operate in the Islay province. One of the most relevant is the danger that the Cachendo Hills would face due to the mining activities. Cachendo Hills are recognized as a fragile ecosystem and an area that needs to be protected and conserved.

The lawyer of the SCC, José Vargas Rivera, claims that according to the recent environmental impact study, the project would not affect the hills. However, the company in charge of the environmental impact study of the Tía María project, Geoservice Ingeniería SAC, was banned to contract with the State by the Supervisory Agency of State Contracting (OSCE) for 3 years and 8 months for presenting false documentation in the past.

After hearing the arguments of both parties, the judicial body announced that it would pronounce the final ruling within 15 working days.

The president of SCC, Óscar González Rocha said that in case of receiving an unfavorable ruling by the Mining Council, “they will defend the viability of the project before the appropriate authorities.”

On July 8, the right-wing government of President Martin Vizcarra, passed the Resolution No. 0328-2019-MINEM/DGM/V and authorized the construction of Tía María. In response, since July 15, thousands of farmers and inhabitants of the Tambo Valley have been striking against the decision made by Vizcarra’s administration. In addition, since August 5, the agricultural, educational and civil construction workers of the Arequipa region carried out strikes in solidarity with the inhabitants of the Tambo Valley. The protesters have raised concerns about the negative consequences that the mining activities will have on the environment and agricultural activities in the region.

Given the strong social resistance, on August 12, the Peruvian Mining Council sent an official notice to the SCC, temporarily suspending the license granted for the construction of the mining project. However, the inhabitants, farmers, environmentalists as well as the municipal and regional governments rejected the national government’s decision and demanded the definitive termination of the project.

In the past three months, dozens of mobilizations across the region as well as in Lima, were carried out in rejection of the mining project. Several important highways and ports in the region have been blocked by protesters and several people have even been injured in several incidents of violent police repression. Last month, on September 16, a regional strike was organized to demand the definitive cancellation of the project, which involved all the southern regions of the country.