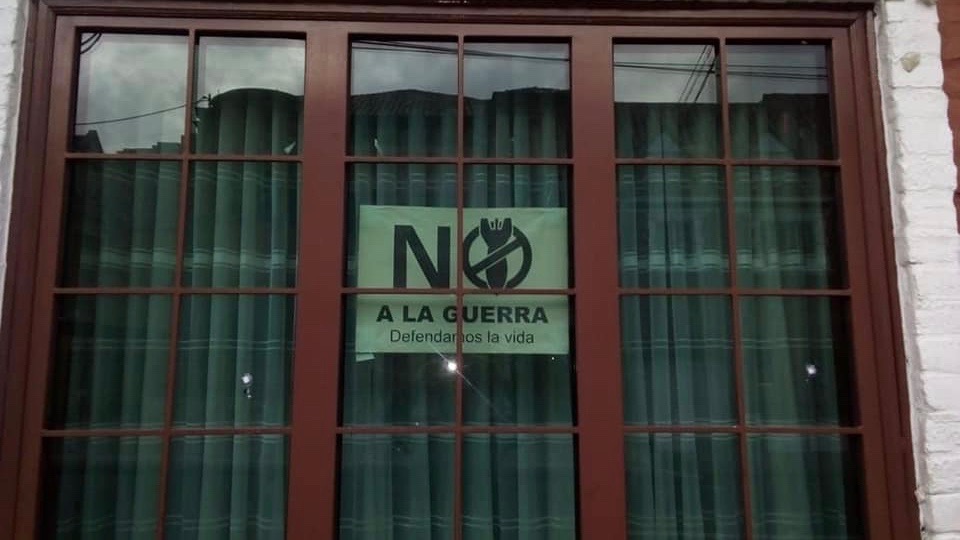 Windows of the Communist Party's office after the shooting and fire bomb.

The office of the Central Committee of the Colombian Communist Party in Bogotá was attacked early on October 11. The attackers shot at the office and threw a firebomb. They also left a pamphlet with a skull on it with “R E G R E S A M O S “ (we will return) written on it. The office is also the national office of the political party, Patriotic Union.

Some hours later, the office of the Common Alternative Revolutionary Force (FARC) political party was also attacked, their campaign banners torn down and the same note was left with the skull and R E G R E S A M O S written on it. They also left a hammer and spray painted a target on the garage.

At a press conference held at the office, Jaime Caycedo, the general secretary of the Colombian Communist party, pointed out the seriousness of the attack, noting that  it had occurred “in the midst of an electoral campaign where the national government affirms that there are guarantees for all of the political parties and movements.”

He also explained the social and political context of the attack. He said that in the face of strong mobilization by broad social sectors, extremist elements were assassinating and issuing death threats to social leaders and ex-combatants of the insurgencies. There has also been a great deal of violence against political candidates. Caycedo reiterated demands for the Colombian government to dismantle and punish paramilitary groups and to guarantee conditions for the political opposition to exist.

These attacks are the latest in what has been one of the bloodiest electoral campaigns in Colombia. On October 27, Colombians will go to the polls to vote in regional elections to elect governors, mayors, council members, deputies for departmental assemblies and members of the community action boards.

According to a report released by the Mission for Electoral Observation, in the first months of the electoral campaign (July 27- September 27), at least 69 candidates were victims of political violence. 7 candidates have been assassinated, 8 suffered assassination attempts and 53 candidates have received threats. A large number of these acts of political violence have occurred in departments such as Valle del Cauca, Bolívar, Antioquia, Cauca, Norte de Santander and Nariño which have witnessed violence due to the armed conflict and continue to be sites of dispute between armed groups.

A recent incident which shook the country was the assassination of Karina García Sierra, mayoral candidate of Suárez, Cauca, on September 2. García Sierra was assassinated along with her mother, a candidate for the municipal council of Suárez, her driver, and two others, while they were traveling to a rural region. Reports said that armed men stopped the car, shot at them and then burned the car. Prior to her assassination, the candidate had faced intimidation and threats.

The attack on the party headquarters occurred on the 32nd anniversary of the assassination of Jaime Pardo Leal, a militant of the Communist Party of Colombia and the presidential candidate of the party, the Patriotic Union (UP). Pardo Leal was assassinated on October 11, 1987 while returning with his family from their farm outside the capital. His assassination occurred in the midst of the genocide of over 4,000 members of the UP. In 2014, the genocide of the UP was declared a crime against humanity.

Today, 32 years later, the Colombian oligarchy resorts to the same methods of violence, persecution and terror to eliminate the political opposition and organized social sectors and maintain its conservative, neoliberal project. According to human rights organizations, since 2016, over 700 social leaders and human rights defenders have been assassinated and over 120 ex-FARC combatants and their family members have been assassinated.