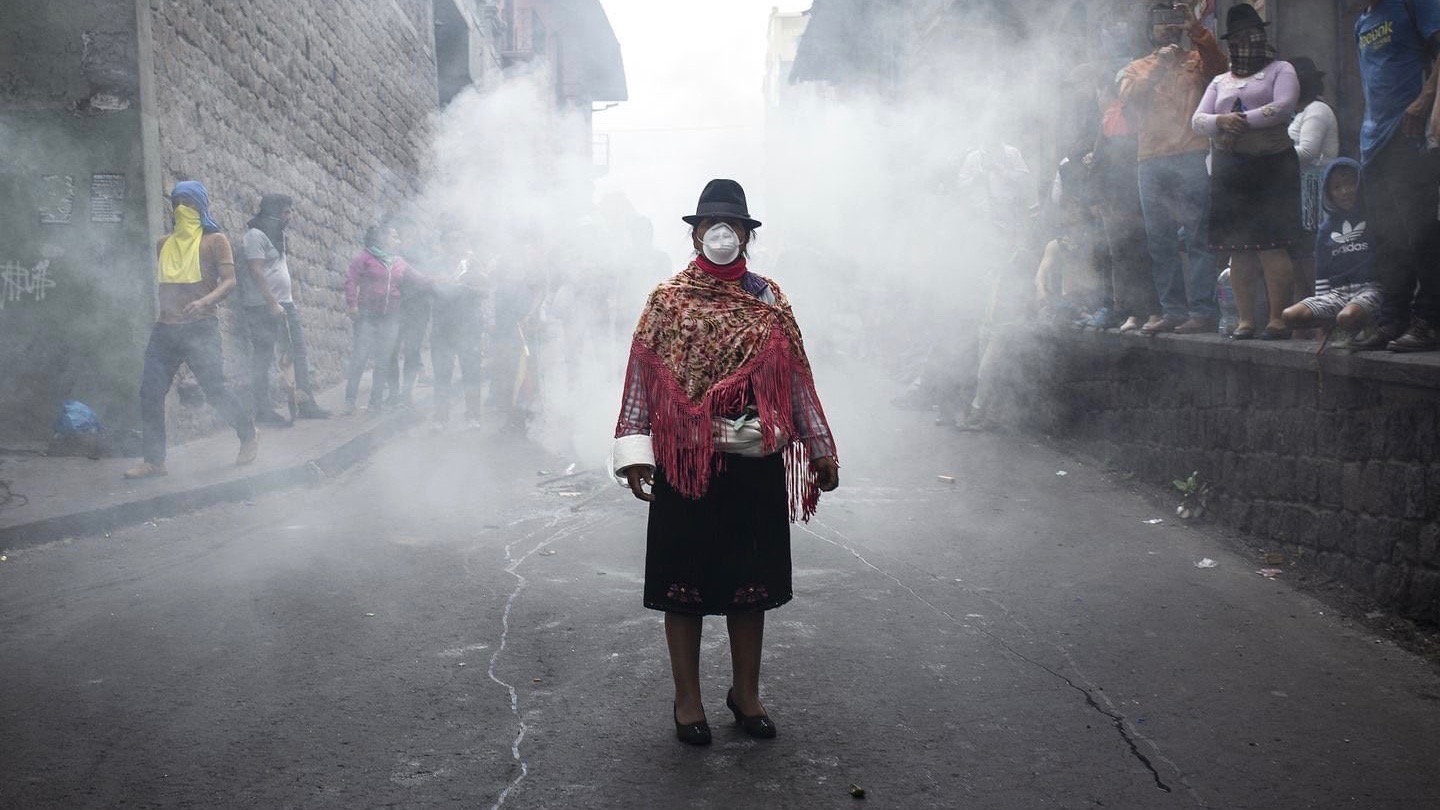 Indigenous woman in the streets of Quito during the protests.

On October 13, the people of Ecuador won a major victory when the government of Lenin Moreno was forced to withdraw the deeply unpopular package of neoliberal reforms. Hundreds of thousands, led by the Indigenous people of the country, had taken part in mass protests for over 10 days against Decree 883 which formalized these reforms. While the people won this round, the larger struggle against the government continues. Shortly after making the concession, the government arrested members of former president Rafael Correa’s political movement, indicating that it had no intention of ceasing its repression.

The withdrawal of the decree took place during talks between representatives of Indigenous movements and organizations and the government team, which included Moreno himself. Decree 883 removed subsidies on fuel, leading to massive price rises, and anti-labor measures. It was imposed as part of a USD 4.2 billion agreement with the International Monetary Fund.

The negotiations between the organizations and the government were broadcast live though only 16 journalists and media organizations were allowed to participate. In the opening address, Moreno announced that Decree 883 would be repealed and a new one would be formulated after further discussions.

At the discussions, Jaime Vargas, the president of CONAIE (Confederation of Indigenous Nationalities of Ecuador), spoke representing Ecuador’s Indigenous nationalities and peoples. “I am indignant for everything that has happened and it hurts my heart,” stated Vargas. He later said that during the protests, 10 people were killed, 2,000 were injured and over 1,000 were detained (official government statistics say that 7 people were killed).

Vargas also highlighted the importance of solidarity and and hailed the participation of social movements, the youth and people of Quito who welcomed, supported and fought besides the Indigenous movements for 12 days.

He said that Decree 883 hurt “the most impoverished of the population because their costs for basic needs and transportation increase…it does not generate any social benefit.” He later added that these actions taken by the government show that the right-wing and the International Monetary Fund are administering the country.

He also warned the government, “We are not going to negotiate dignity. We will not negotiate our martyrs. We hope that today we will find a definitive and lasting solution, and if this is not achieved, we will continue, firm and united and with the unrelenting commitment of defending our people and we are ready to make all of the possible sacrifices. And if that means giving our lives, we will do it.”

These words are significant in light of Lenin Moreno’s attempts earlier to divide the masses who had taken part in the protests. Moreno claimed that he has “always respected Indigenous people” and “treated them with care” but then went on to say that the rest of the people protesting are violent and bad, those that “created chaos and an apocalyptic situation”. Moreno even resorted to the tired tropes of accusing the ‘violent’ protesters of having links to drug trafficking, being foreigners and employing tactics used by guerrilla groups in Colombia. He also reiterated the claim that they were instigated by Rafael Correa and his followers.

The distinction between protesters, was of course refuted by Vargas who highlighted the unity of those on the streets, as well as the righteous indignation of the people in Ecuador. The brutal repression of the Indigenous movements by the police and military is further evidence that Moreno both does not respect and treat Indigenous people and their demands with care, and that all protesters faced the same violence from the repressive forces.

Moreno’s words were followed by a wave of detentions on October 14 of key leaders and activists who are being accused of causing “violent episodes” during the protests. Many of them face serious charges.

On Monday morning, the attorney general of Ecuador announced on Twitter that after ‘investigations,’ three individuals – Paola Pabón, Christian González and Pablo D – had been detained. It is no accident that those who were arrested are active in the Citizen Revolution (a political project started by Rafael Correa) and two of them were members of his government.

Paola Pabón is the current prefect of the Pichincha province and served in the government of Correa. She said she was detained early in the morning on October 14 after an illegal raid was conducted in her home: “Today, they entered my house at dawn and knocked down the door while I was sleeping. They arrested me without any proof. To be from the opposition in a democracy cannot be a crime. It is not democracy when members of the political opposition are persecuted in this way.” She is accused of being one of the instigators of the protests against the package of neoliberal economic measures.

Christian González, a militant with the social organization Bulla Zurda, was also detained without any evidence on charges of  “rebellion,” according to Ecuadorian activists. González served as the sub-secretary of movements, organizations, and social and political actors in the government of Correa. Pablo Lastra, who was also arrested, is a member of Bulla Zurda.

The platform, Social Movements of ALBA, denounced the arrest of González in a communique, “[The arrest] is part of political persecution against members of the Citizen Revolution, and is a sign of an authoritarian and anti-democratic government. We hold Lenín Moreno responsible for the safety of this young person [Christian] and those detained for their political position.”

The state of emergency which was imposed on October 3, as well as the curfew, has been suspended.