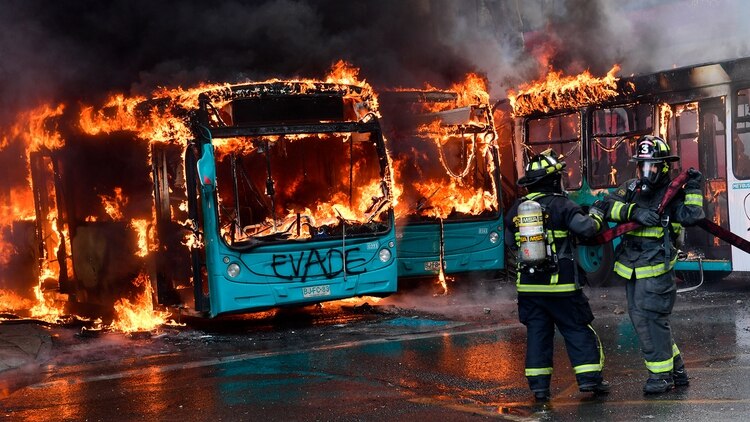 "Evade!" written on a bus in Santiago.

High school students have been mobilizing against the latest public transportation fare hike in Chile’s capital Santiago for the past week. Students have been organizing massive fare evasion protests in metro stations across the city, in rejection of the exorbitantly high fares. Following the circulation of videos on social media depicting episodes of violent repression of the students, the broader public in Santiago joined in on the protests and Friday thousands took to the streets.

On Friday night, protesters responded strongly to the brutality of the Chilean state, expressed through its physical repression of its citizens as well as the neoliberal stranglehold on the working class. Protesters set fire to several metro stations, the headquarters of the National Energy Company, buses, and a branch of Banco Chile.

Chile’s national police force, the Carabineros, responded to the massive protests with violence and at least 300 people were arrested and over 150 were injured throughout the course of the night. Just after midnight, Chile’s president Sebastian Piñera declared a state of emergency in the provinces of Santiago and Chacabuco and the communes Puente Alto and San Bernardo.

Under the state of emergency, Piñera delegated Mayor General Javier Iturriaga del Campo as the chief of national security and the responsible authority for Santiago for the next 15 days. The state of emergency also prohibits the people from holding public meetings, mobilizations,  and allows the military to fulfill the functions of the police.

Iturriaga spoke on National TV after the state of emergency was declared and clarified that “We will not restrict any personal freedom for now” [emphasis added].

On Saturday morning, Santiago woke up to heavy military presence across the city. Large sections of Santiago’s downtown were closed down and all the services of the metro system have been suspended. However despite the heavy militarization and the state of emergency, thousands took to the streets on Saturday.

The fare hike was announced on October 6 by the Ministry of Transport and Telecommunication and increased fares of the buses, Metro and Central trains across the province of Santiago. The Chilean public transportation services are some of the most expensive in the region.

While the fare hikes served as the catalyst for the recent wave of protests in Chile, they have awakened the long standing discontent in Chile which has served as the laboratory of neoliberalism in the region and is one of the most unequal countries in Latin America and the Caribbean. Under Sebastian Piñera, neoliberal measures have been intensified with the acceleration of the repeal of workers’ rights, anti-union measures, privatization of public education, and advancement of the extractive industry.