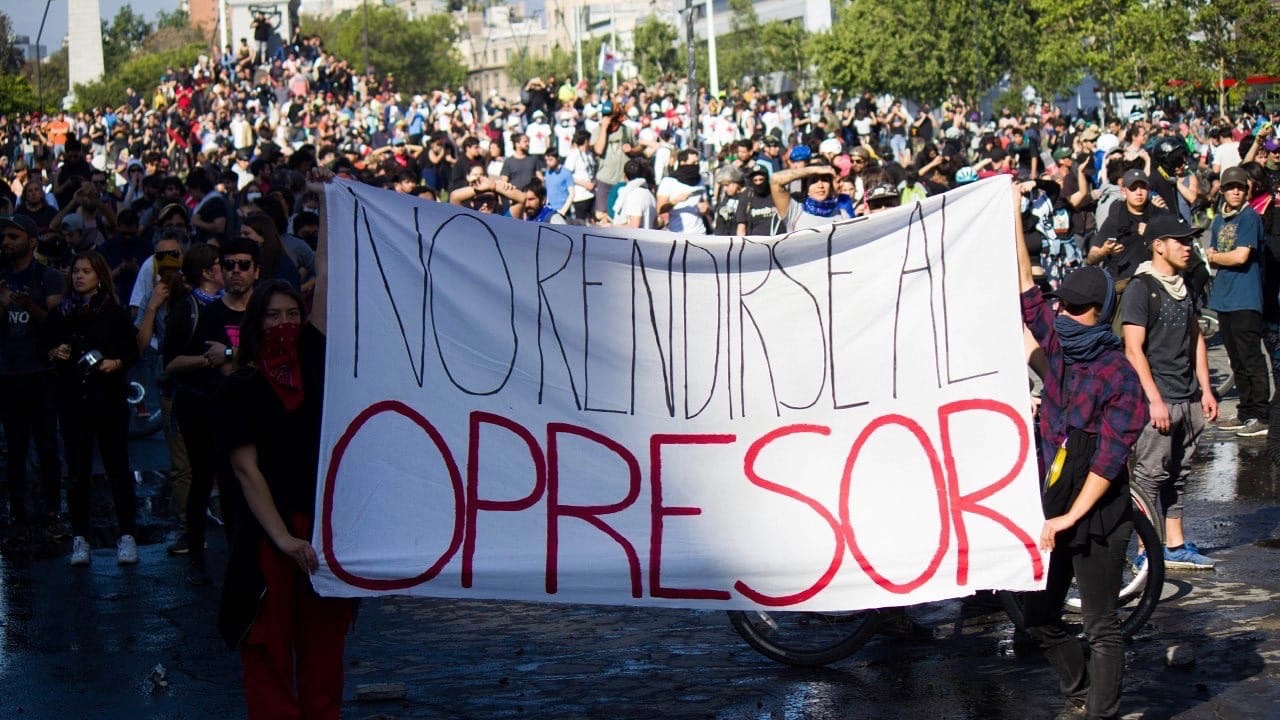 Do not give in to the oppressor. Photo: Frente Fotográfico

On Monday October 21, thousands of Chileans mobilized in different parts of the country as part of a national strike. Social movements, trade unions, students, teachers, women and human rights’ organizations called for the strike to reject the neoliberal policies of the right-wing government of Sebastian Piñera and the heavy police repression of social protests during the weekend.

Chileans are also demanding that the government immediately withdraw the state of emergency declared in different regions of the country. This measure has allowed the government to deploy the military in several cities across the country to fulfill the role of the police. Social movements and organizations have pointed out that the military has not patrolled the streets of Chile since the last civic-military dictatorship under Augusto Pinochet. For the past several nights, curfew has been in place in several cities in Chile, including Santiago, Coquimbo, La Serena, Valparaíso, Rancagua and Concepción, restricting the mobility and liberties of residents.

The levels of repression against protesters in the past couple of days have been unprecedented. Reports by human rights organizations on the ground indicate that over 10 protesters have been killed, over 1,500 people detained and hundreds injured. There have also been reports of plainclothes police officers detaining protesters and dragging them into non-official vehicles. Several protesters have been tortured and even sexually abused.

On Sunday night, Sebastian Piñera gave a press conference where he responded to the current social, political and economic crisis occurring in the country, as well as criticism about the heavy-handed response to protesters. He declared “We are at war with a powerful, relentless enemy that does not respect anything, or anyone, and that is willing to use violence and crime without limits.”

Despite the climate of heavy repression, militarization and criminalization, Monday’s national strike saw massive participation from broad sectors of Chilean society. In addition to youth and students, several important trade unions pledged their support to and participated in the strike.

The Trade Union of Dock Workers of Valparaíso released a communique on Saturday, pledging their support to the national strike and denouncing the government’s economic policies and repression. The communique said, “If it is true that today, the central motive of the social protest is the hike in the value of the metro fare in the capital, we must also underscore that this accumulated rage today is expressed by the rejection of the endless social, economic, and labor injustices that affect the working people. The union said that it considered the deeper problem to be the economic model of development which forces the working class to survive on miserable salaries and pensions, struggle with illnesses and poor social security cover and deal with exorbitant transport costs.

The union declared, “We want the political class to understand that all of us are Chile and that the solution to these injustices requires the transformation of the entire model.”

The Trade Union Number 1 of Workers of the Escondida Mine also joined the strike. Their statement said, “We cannot continue working and allow these powerful companies to function as if nothing happened, knowing that they are colluding with this government that is attacking and oppressing us. We cannot not stop our activities, because history will condemn us as cowards and accomplices of these attacks on the working class..We cannot not stop our work because we will not be capable of looking at our families in the eye, especially our children that today are in the struggle, without feeling that we did not do anything to support them and defend them.”

They called on their fellow mine workers “to stop work…to stop all of the mining in Chile along with other productive sectors until the military forces and oppressors in the streets retreat and until the government authorities are willing to sit down for dialogue on equal terms with the people who demand and fight for equality, justice, opportunities, work and a dignified life for our people.”

The recent wave of protests in Chile was sparked by the government ‘s decision to increase the cost of public transportation services in the capital. On October 11, high school students began refusing to buy metro tickets en masse and jumped the turnstiles to protest the hike.

The protests transformed into a demonstration against the neoliberal model imposed in the country since Augusto Pinochet’s dictatorship. It expanded and soon included different sectors of the Chilean society. On October 18, a massive demonstration was carried out in the capital city, Santiago, and was violently repressed by the national police force, the Carabineros. Following the mobilization, Piñera declared a state of emergency in Santiago in order to suppress the popular indignation.

The social movements of ALBA also expressed its support and solidarity with the people of Chile in their fight against neoliberalism and denounced the state’s repression of social protests. “We denounce the authoritarianism of Piñera’s government and demand an end to the State of Emergency. No more repression and arbitrary detentions. We embrace and join in solidarity from all over Our America in support of the general strike this Monday, October 21,” said ALBA in an official statement.

In Buenos Aires, Argentina, Chilean activists, as well as Argentine social movements and organizations, mobilized outside the Chilean embassy to denounce the brutal repression of the government and stand in solidarity with the dignified struggle of the people. Their mobilization was met with heavy repression by the Argentine police and several people were arrested.

Chile is the country with the highest numbers of free trade agreements in the world. Chileans are tired of the austerity and anti-people policies introduced by Pinochet and intensified by Piñera. They are determined to fight against the capitalist government, inspired by the recent struggle carried out by the people of Ecuador and their subsequent victory.