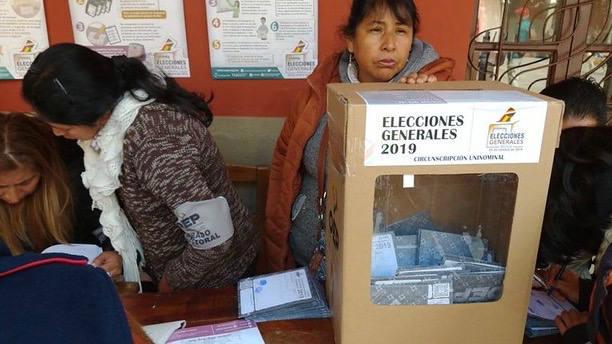 The official results in the Bolivian elections have not been released yet, but the latest tendencies indicate that Evo Morales could emerge as the outright winner. Photo: Daniel Giovanaz

The streets of Bolivia are tense as the votes from the general elections continue to be processed and published. While on Sunday the preliminary results seemed to indicate that a run-off election would be necessary, as the votes from outside Bolivia and from the rural regions are processed the tendency indicates Evo Morales will receive enough votes to win in the first round.

In order to win in the first round, the lead candidate has to win more than 50% of the votes or more than 40% of the votes with a 10% lead over the runner-up. Current projections, as an official update of the overall vote tendency has not been released, have Evo Morales of the Movement Toward Socialism (MAS) at 46.8% and Carlos Mesa of Citizen Community (CC) at 36.7%.

Following the shift in the tendency, which was predicted as the rural regions are the central base of support for MAS, sectors of the Bolivian right-wing including CC, the Civic Committee of Santa Cruz, and the National Committee in Defense of Democracy (Conade) and Carlos Mesa himself have called for a national strike on October 23. Already, right-wing opposition “shock” groups have carried out violent acts. On Monday night in Sucre, a group of protesters who are alleged to be supporters of Carlos Mesa and CC party burned the office of the Electoral Tribunal as well as the offices of the United Federation of Indigenous People Workers of Chuquisaca.

In the opposition dominated province of Santa Cruz, several acts of violence against MAS supporters and government buildings have also been registered since Monday. In Cochabamba, a group of Mesa supporters violently entered the campaign headquarters of MAS to destroy and burn furniture. Several other cities have also witnessed similar occurrences. In response to the unrest, government officials have called for citizens to remain calm and tolerant while they wait for the final results to be released.

On Monday October 21, the Organization of American States (OAS) released a communique in response to the elections in Bolivia. It expressed “deep concern and surprise at the drastic and hard-to-explain change in the trend of the preliminary results revealed after the closing of the polls.” Given the antagonistic position of OAS on Cuba and Venezuela, this response is unsurprising, meanwhile they have remained silent in response to the people’s uprisings in Haiti, Honduras and Chile and the brutal repression of protesters in these countries that has already cost many lives.

The Bolivian Government sent a letter to the Secretary General of the OAS Luis Almagro on Tuesday October 22 inviting the organization to carry out an official audit of the vote counting process for Sunday’s elections.