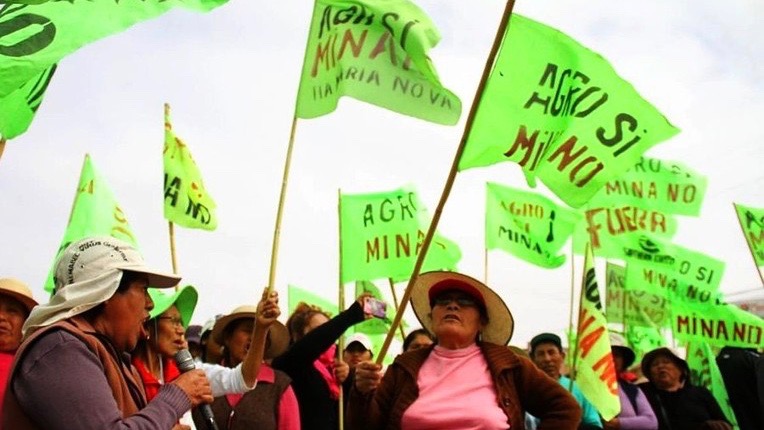 Several demonstrations were held in the Arequipa region with green flags that say “Agro yes, mining no”, following the ratification of the construction license for the Tía María, on October 30. Photo: El Buho

On October 30, the Peruvian Mining Council, autonomous entity affiliated with the Ministry of Energy and Mines (MINEM), announced its final ruling on the case of Tía María copper mining project, located in the Tambo Valley, in the Islay Province of Arequipa region. The Mining Council declared the appeals unfounded and revoked the temporary suspension of the license authorized to the Mexican mining company, Southern Copper Corporation (SCC), for the construction of the long-resisted Tía María mine.

The revision appeals against the construction license were made by the regional government of Arequipa, the Tambo Valley Users Board and the Front for the Defense of Minority Workers and Shareholders of the Chucarapi Sugar Mill Pampa Blanca SA and Annexes. On October 7, the Mining Council (CM) heard the arguments of both the parties and announced that it would pronounce the final ruling within 15 working days.

Following the announcement of the ratification of the construction license for the Tía María, the inhabitants and farmers of the Tambo Valley, rejected the CM’s decision and called to continue the protest measures and roadblocks that they have been carrying out for more than 100 days. Several small demonstrations were held in districts of Cocachacra, Deán Valdivia and Punta de Bombón in the Arequipa region. Dozens of people demonstrated in the center of the cities with green flags that say “Agro yes, mining no”.

In Cocachacra, clashes between the members of the National Police and the protesting farmers were registered. A truck transporting farmers to the Tambo Valley was overturned on the road by a police tank, though the officials claim that it was an accident. The ‘accident’ provoked clashes between the two groups and at least five people, including two children, were arrested by the police.

Elmer Cáceres Llica, the governor of the Arequipa region, called the granted license illegal and said the CM’s decision only served the “transnational interests”. Llica announced that he would resort to the Judiciary of Peru to reverse the CM’s decision and prevent the mining company from restarting its work. “Hopefully the judiciary is autonomous, we do not have a Legislative Power, we no longer have the Congress and practically the Executive is ruling at will,” said the governor in a press conference.

Richard Ale Cruz, the mayor of the Deán Valdivia district, also lamented the CM’s decision and announced that he would support the protests called by the population. He reiterated that the approval processes of the environmental impact study and the construction license were irregular. He also criticized the mainstream media for not reporting the reality of the environmental issues in the region due to mining activities. Finally, he announced that they would go to the Inter-American Court of Human Rights to demand justice as the national justice had turned a deaf ear to their concerns.

Julio Cornejo, mayor of Cocachacra district, also rejected the CM’s decision to validate the construction license of Tía María mine. He said that the CM had always the construction of mining project and warned that the response of the population could be similar to the discontent experienced in Chile or Ecuador.

Since July 15, thousands of farmers and inhabitants of the Tambo Valley have been striking against the decision made by the right-wing government of President Martin Vizcarra to authorize the construction of Tía María. In addition, since August 5, the agricultural, educational and civil construction workers of the Arequipa region carried out strikes in solidarity with the inhabitants of the Tambo Valley. Last month, on September 16, a regional strike was organized to demand the definitive cancellation of the project, which involved all the southern regions of the country.

The protesters have raised concerns about the negative consequences that the mining activities will have on the environment and agricultural activities in the region and are demanding the definitive termination of the project.

The mine is located 2 kilometers away from the Tambo Valley, which is home to over 24,000 people who are primarily dependent on agriculture. The vegetables and fruits produced in the valley serve more than 4 million Peruvians. Due to its proximity, at least 1,300 hectares of agricultural land are threatened by the project. The release of chemical substances such as cyanide and nitrogen from mining operations can pollute the air and water resources of the valley, which consequently could contaminate crops, destroy forests and affect the health of the population as well as of the wildlife.

In the revision appeal, the regional government of Arequipa, highlighted a number of facts that prove SCC’s illegality to operate in the Islay province. One of the most relevant was the danger that the fragile ecosystem of Cachendo Hills would face due to the mining activities.

The construction of the mine began in 2003. However, in 2011, the project was put on hold after a series of protests carried out against it by the inhabitants of the region. Resistance to the project began again in 2015, when the government proposed to reopen it. In both moments of resistance to the project, the repression of protesters by national security forces caused several deaths and injuries.

In the past three and a half months, dozens of mobilizations across the region as well as in the capital Lima, were carried out in rejection of the mining project. Several important highways and ports in the region have been blocked by protesters and several people have even been injured in several incidents of violent police repression.