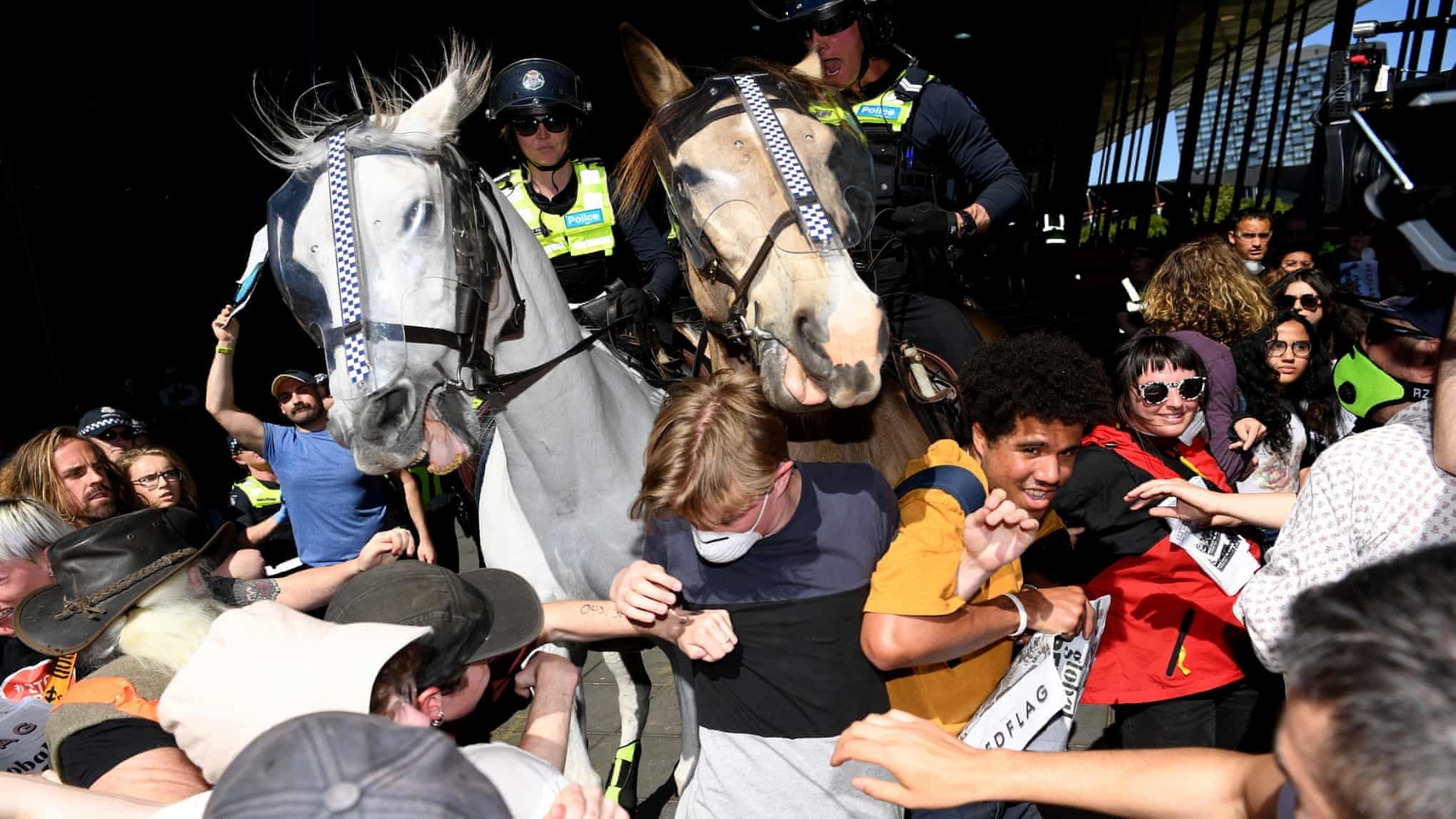 The police charged at the protesters with horses and attacked them with pepper spray.

On October 29, the Victorian police violently broke through the picket line organized by anti-mining protesters at the Melbourne Convention and Exhibition Centre. One person was injured. The police used pepper spray against the non-violent protesters who were blocking one of the several entrances to the exhibition center that is currently holding one of the largest mining conventions in the world.

The police violence took place on the second day of the sixth annual International Mining and Resources Conference and Expo (IMARC) that brings together over 6,000 executives representing more than 300 mining corporations from around the world. At the very outset, the executives of these companies were greeted by citizens protesting the environmental destruction and mass dispossession that the mining sector has caused. Organized under the banner of Blockade IMARC, dozens of protesters have been gathering at the main entrance of the exhibition center, often blocking the entrance and chanting slogans like “Blood on your hands!” at the passing corporate executives.

According to the Green Left Weekly, on the second day, the police targeted those with microphones or anyone leading protest chants. Horses were used to charge at the protesters, while batons were used to beat anyone who might come in their way, including reporters at the site.

20 people were arrested in the attack, many of whom could face fines as high as AUD 4,000 (USD 2,700). Organizers of the protests have created a crowdfunding page at GoFundMe to raise money to cover possible litigation charges. One of the protesters was reportedly hospitalized because of a pepper spray attack. Most people were taken care of by a wellness stall that was set up to assist the blockade.

The police defended their actions, stating that they were escorting the executives and that the protesters were apparently “more violent” than the police, even though not a single instance of violence from the blockade has been reported so far. Earlier, executives had reportedly complained of “harassment” and of being “verbally abused” by the protesters, whose only crime seems to have been shouting out aloud the attacks on the environment and people by the companies. Protesters argued that the violence was unnecessary since they were only blocking one of the several entrances to the convention center.

Despite the police offensive, the protesters remain unwavering in the blockade, and came back again with swimming goggles, umbrellas, rainwear and clothes that can cover most of their body, to protect themselves from any further pepper spray attacks. Protesters even collected “60 peoples (sic) worth” empty and used pepper spray canisters left behind by the police in paper towels and disposable underpads, and handed them back to the police.

Blockade IMARC has stated on their website, that “the attendance list of IMARC features a who’s who of Australian and international climate criminals.” The campaign includes the Extinction Rebellion, Victorian Socialists and the environmentalist unit of the University of Melbourne Students Union and is supported by different Indigenous groups from across the world.

The anti-mining movement in Australia has expanded quite significantly over the recent years, especially because of the aggressive policies of the incumbent Conservative government. These policies have led to the expansion of the sector, jeopardizing Indigenous lands, forests and other resources. The massive turnout for this year’s protest against IMARC, as opposed to relatively much smaller even if prominent turnouts for previous conventions, is a testament to that. The IMARC is an annual event that was first held in 2014. 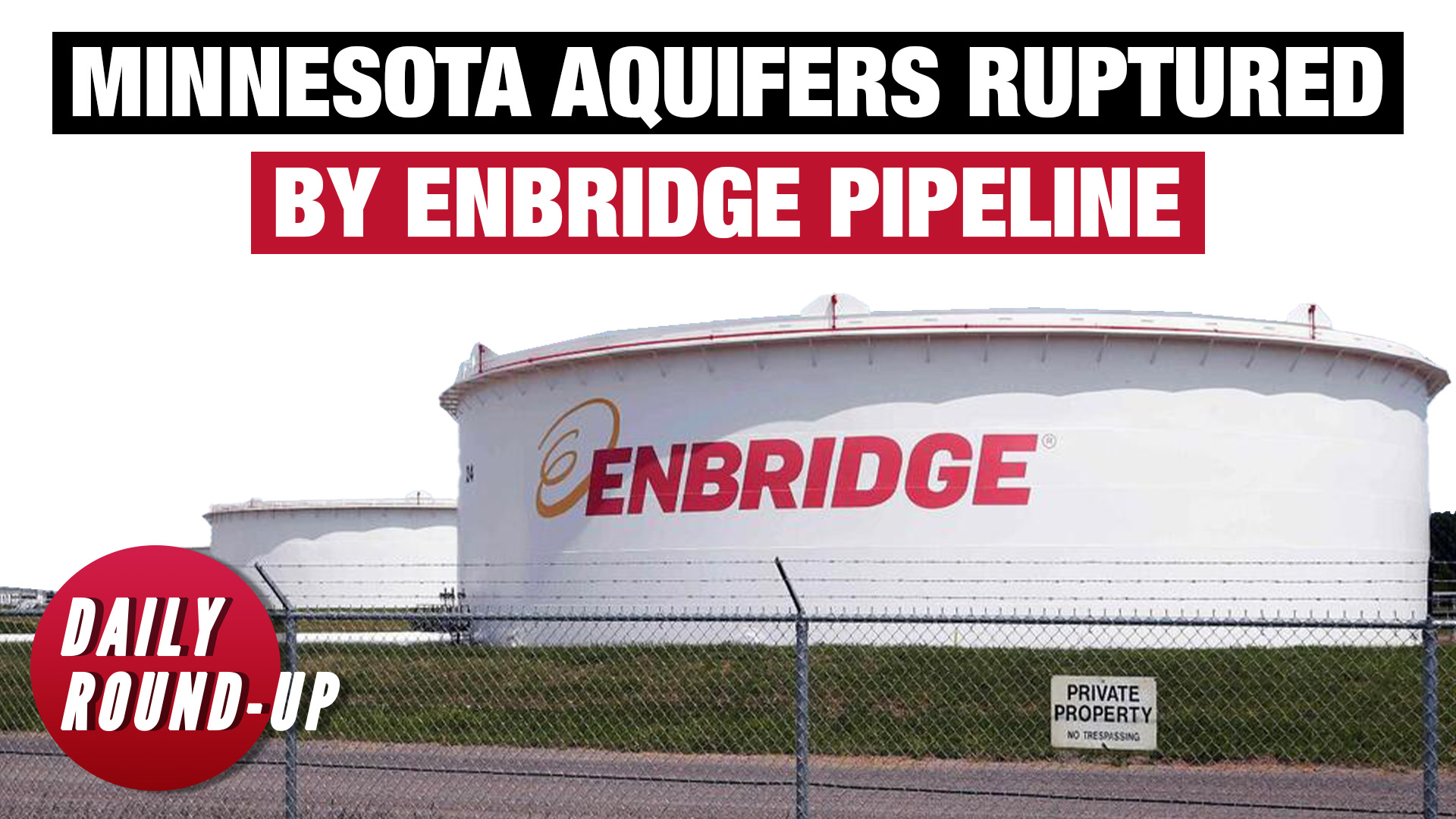