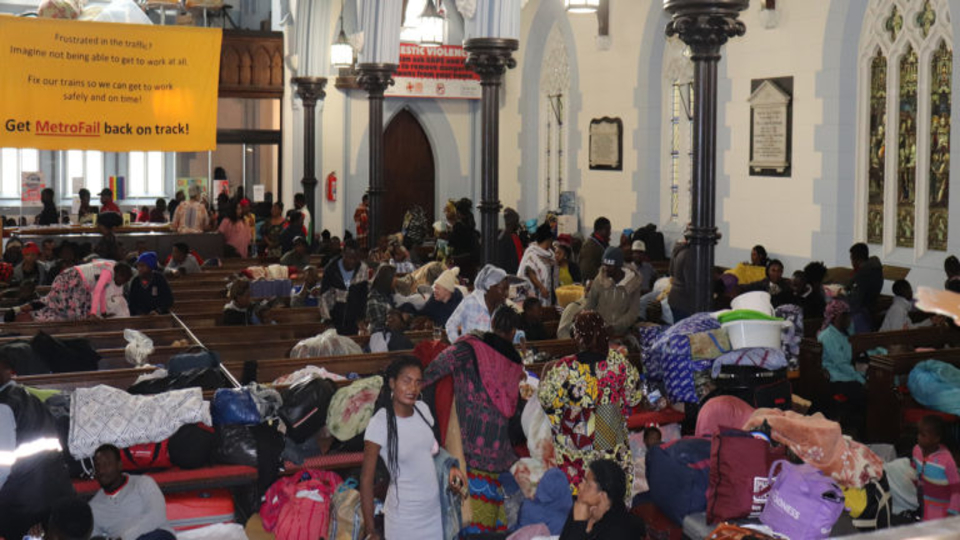 The refugees at the Central Methodist church after being forcefully evicted from the site of their sit-in demonstration.

Hundreds of refugees, who were violently evicted by the South African police from a sit-in demonstration outside the UN High Commission for Refugees (UNHCR) office in Cape Town, have now found refuge in the Central Methodist Church in the city’s Greenmarket Square. The refugees, who were victims of xenophobic riots in September, were evicted from the sit-in on October 30, Wednesday.

The sit-in demonstration outside the UNHCR office began on October 8, a few weeks after the riots which left at least 10 dead and many more injured. The refugees, many of whom have resided in South Africa for over a decade, do not feel safe in the country any more. They have been demanding that the UNHCR return them to their home country or to another country where they will be safe.

On October 18, a court ruled in favor of the owner of the property where the sit-in was being held and ordered an eviction. However, more and more refugees continued to join the hundreds who were already at the sit-in until their number was around 5,000 by October 23.

On October 30, about a 100 police officers arrived at the scene and ordered them to clear the place. When the refugees refused to leave till their demand for relocation was met, the police fired three stun grenades at the demonstration. They then attacked the refugees. Pepper spray was used on many, who were then dragged on to the floor outside the building. Footage showed the police overpowering women and forcibly snatching away their children.

At least seven children and five adults went missing, according to News 24. At least 100 people were injured.

Many women were forcible separated from their children.  “Several of the children ran back to their mothers after being pulled away; however, they were once again removed by the police. Once the children were taken out of the building, the remaining police officers told the mothers to leave the building and that their children would be returned to them outside,” Daily Maverick reported.

After the building was vacated, many women came back to the police who were cordoning off the building, demanding that their children be returned to them. Many of the men’s faces were bloodied by the time the police had cleared the building.

In the meantime, about 200 refugees had gathered outside at the entrance to the arcade, chanting slogans against xenophobia. When firing six rounds of water cannon failed to disperse them, the police fired stun grenades again, and moved in to clear the area outside the arcade, which was then sealed off to prevent them from returning.

By the end of the operation, about a hundred refugees were arrested, according to the SAPS. Some of them later alleged that they were further assaulted in police cells. SAPS spokesperson brigadier Novela Potwela denied the allegation and said that they were released without being locked up in cells.

While Potelwa maintains that the police had to do their jobs to assist the sheriff to evict 300 refugees, as per the court order, it appears a much greater number were evicted. Around 600 were sheltered in the Central Methodist church.

Many activists and humanitarian groups are collecting medicines, first aid kits, sanitary pads for women and diapers for babies who are crammed in the church with an uncertain future.

“Men, women and children crowd every pew, aisle and corner. Suitcases are stacked, and people step over one another to walk through the space,” Ground Up reported on Friday.