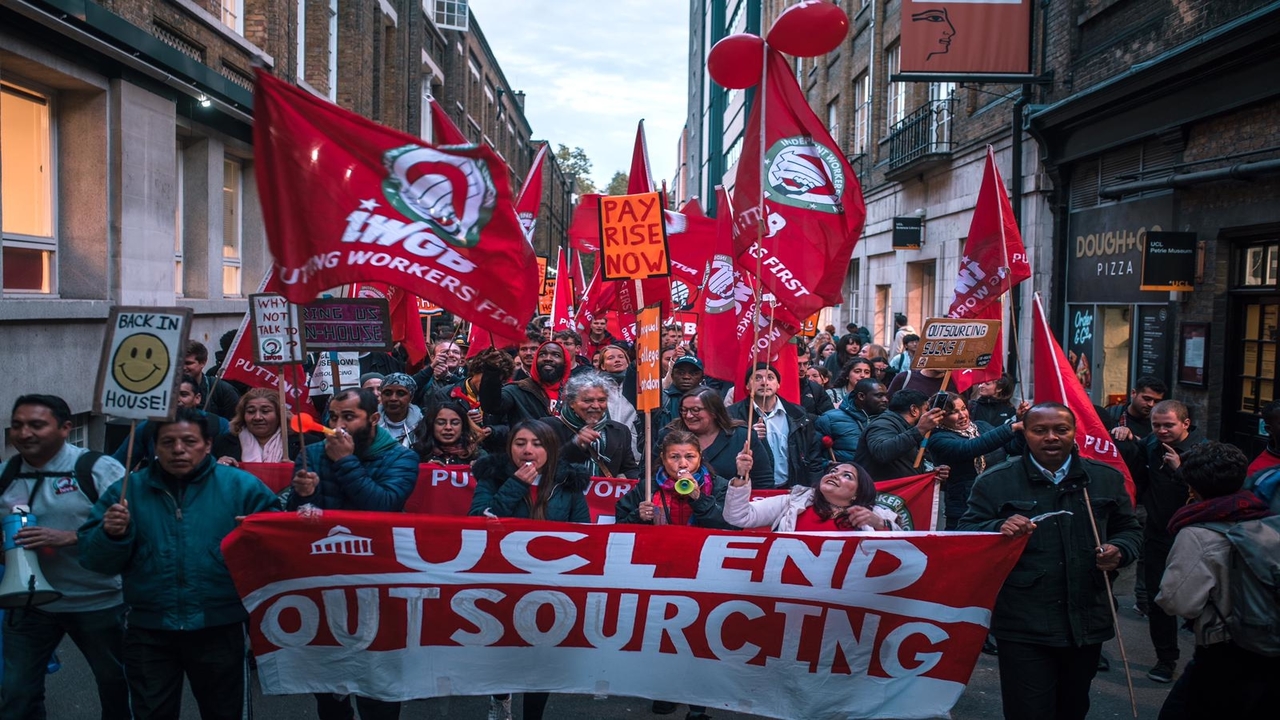 Outsourced workers of the University of London at a protest against the policy of outsourcing labor contracts. (Photo: Pietro Sambuy/IWGB)

Hundreds of sanitation staff, porters and security officers of the University College of London have voted to go on strike. The strike, organized by the Independent Workers’ Union of Great Britain (IWGB), is expected to begin on November 19. The strike was approved by an overwhelming 98% of the workers in a vote.

The nearly 300 workers are demanding an end to outsourcing and zero-hour contracts. These employees are among the lowest paid workers in the UCL system, and many of them hail from outside the country

The workers have demanded that the two outsourcing companies, Axis and Sodexo, offer them the same pay and benefits as their in-house counterparts. As outsourced workers on zero-hour contracts, the migrant workers are paid the most basic minimum wages, receive only 28 days of annual paid leave, and an insurance contribution of 3% from the hiring company, as is statutorily mandated. They have little scope for growth in terms of wages or position. A full-time in-house employee, on the other hand, is entitled to annual wage increments, 41 days of annual paid leave, and an insurance contribution of 18% under the Superannuation Arrangements of the University of London (SAUL), along with other benefits. In-house workers get up to 26 weeks of paid sick leave and 18 weeks of paid parental leave, depending on their years of service. A large part of the workers’ demands thus revolves around their formalization.

The union has also raised other pre-existing disputes with the service contractors and the university. One of the issues is about arrears to the tune of GBP 15,000 in paid holidays between December and February that are due to 30 security staff members contracted by Axis.

Multiple strikes for the outsourced workers of the University of London’s Senate House have been organized by IWGB, which was founded in 2012, along with several union interventions for migrant workers in London. The Senate House strike had over 100 migrants picketing the building that houses the administrative center of the university. The strike also triggered the ongoing nationwide academic boycott of the Senate House, which houses some of the premier research institutions in the country.

The UCL strike is expected to be on a much bigger scale.

The strike is part of the IWGB’s larger campaign against the outsourcing of labor contracts in the UK. As part of the efforts to raise support for the strike action, IWGB has also opened a GoFundMe page.

The leader of the IWGB’s University of London branch, Maritza Castillo Calle, stated as part of the union’s statement that, “(o)utsourcing forces us to work sick and injured, to work all our lives and still retire in poverty. For decades, UCL has treated its majority migrant and BAME (Black, Asian and Minority Ethnic) outsourced workers like second class citizens, condemning them to a system of bullying and discrimination.”