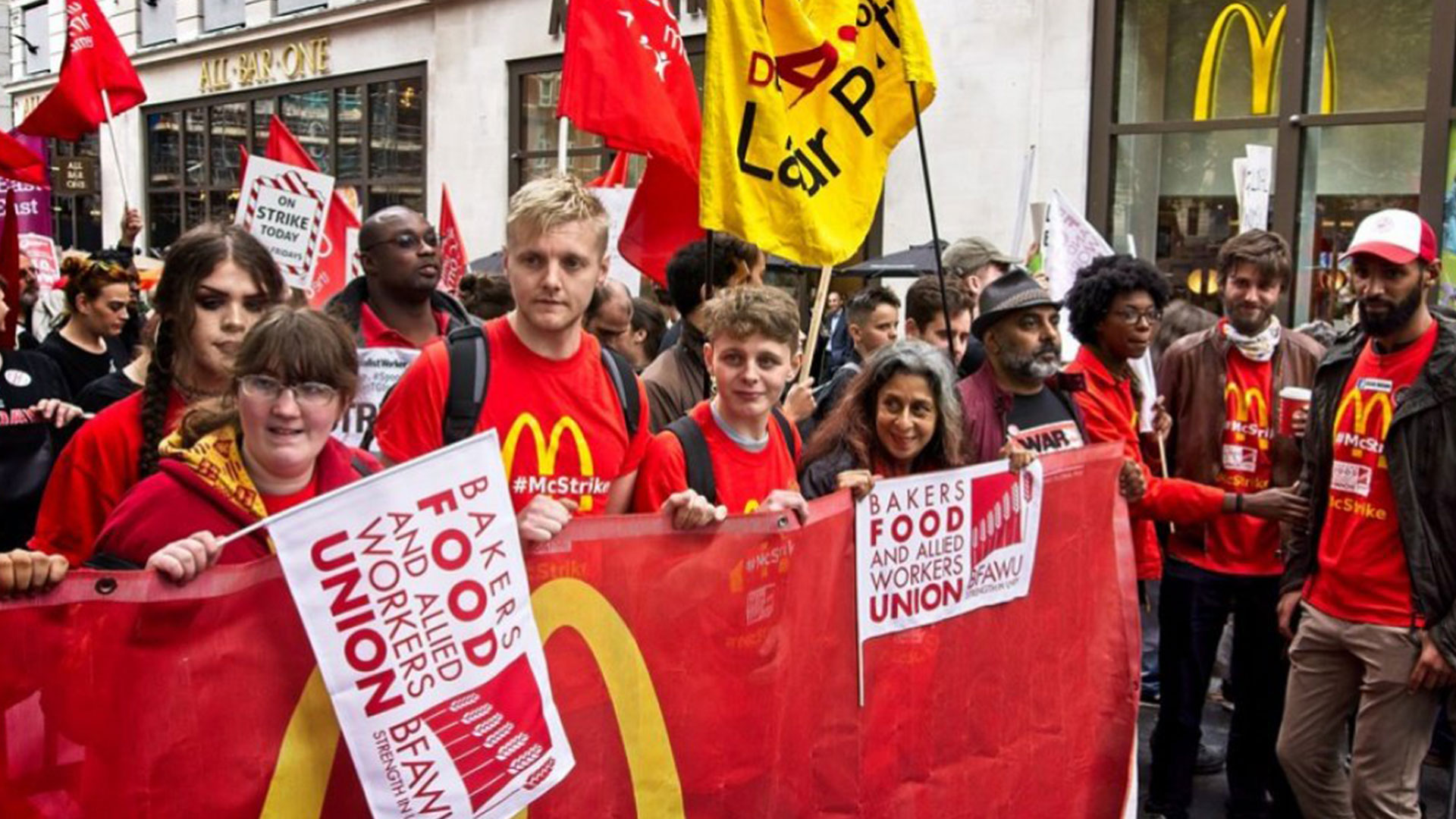 Workers, organized by the BFAWU, have demanded a hike in wages to GBP 15 per hour and union recognition, among other things (Photo: Morning Star)

Hundreds of workers at six outlets of McDonald’s in United Kingdom, walked out in strike on November 12. The workers organised by Bakers, Food and Allied Workers’ Union (BFAWU) have submitted an open letter with their demands to the 10 Downing Street, the seat of the British government.

Some major demands include: a GBP 15 (USD 19) per hour wage to all workers across all outlets, contracts that guarantee 40-hours of work a week, four-week advance notice of shifts, union recognition and treatment with respect and dignity. Workers from six outlets in South London—Wandsworth Town, Downham, Balham, Deptford, Catford and Crayford—staged the walkout.

The multinational fast-food giant is among the biggest employers in the UK, outside of the National Health Services (NHS), but its contracts are among the lowest paid wage jobs in the country. Most workers are paid little more than the government-stipulated minimum wage of GBP 8.21 (USD 10.5) per hour, which, many complained, has kept them in consistent poverty.

McDonald’s, like many other fast food chains, operate through franchises with individual contractors, which often implies that workers are not hired by the company but the franchise holders. So, workers are often hired in the UK under the notorious ‘zero-hour contracts’, that has been widely criticised by trade unions. These contracts do not guarantee any minimum number of hours, pay only the most bare-minimum wage and benefits required under law, and do not offer any scope for growth.

Workers at the McStrike have reportedly stated that the wage and work hours are not enough for the workers to make a living, as they often have to rely on government welfare programmes to get by. “McDonald’s can afford to pay us GBP 15 an hour,” said Lewis Baker in a statement by BFAWU declaring the strike. Baker, who works at an outlet in Crayford, added that the wage hike is “a reasonable request for a corporation that earns millions every day. Instead of listening to what we’ve been demanding, McDonald’s has tried to dismiss us, saying we were few”.

In an op-ed written for Metro, Melissa Evans, one of the striking workers from Wandsworth Town outlet, narrated her struggle with poverty, as she is paid GBP 9.45 per hour in a 28-hour work week.

“I work so hard, yet sometimes, I have to choose between putting gas and electric in my house over paying my rent. I make sure there’s food in the house for my son, but then I’ll eat at work. Those work meals are the only meals I’m eating in a day, and I know I’m not the only one doing this.”

Melissa Evans: Why I McStrike

First in a new series of Morning Star profiles, fast food worker Melissa Evans explains why it's time for a strike at the red and yellow flagship brand of capitalism itself: McDonald's.

The open letter also described the indignation McDonald’s workers suffer at the hands of their employers and customers alike. Evans ended her letter with a note on how the protests are bringing the workers together: “I worked with people for two years and yet knew nothing about them. But now we make plans, and most importantly, we talk to each other. We’ve created a bond and we have each other’s backs. Together, with fast food workers around the world, we are powerful.”

This is not the first time that the workers have gone on strike. McDonald’s has faced three different strikes in the last two years. Even though the corporation has tried to dismiss the strike as a “tiny minority”, the fact remains that with each strike, the number of protesting workers has only grown. The strike on Tuesday, was the largest one that McDonald’s has faced in the UK.

The strike was called to coincide with the global day of action called by the International Union of Food, Agricultural, Hotel, Restaurant, Catering, Tobacco and Allied Workers’ Associations (IUF), that was held across the UK and other parts of the world.