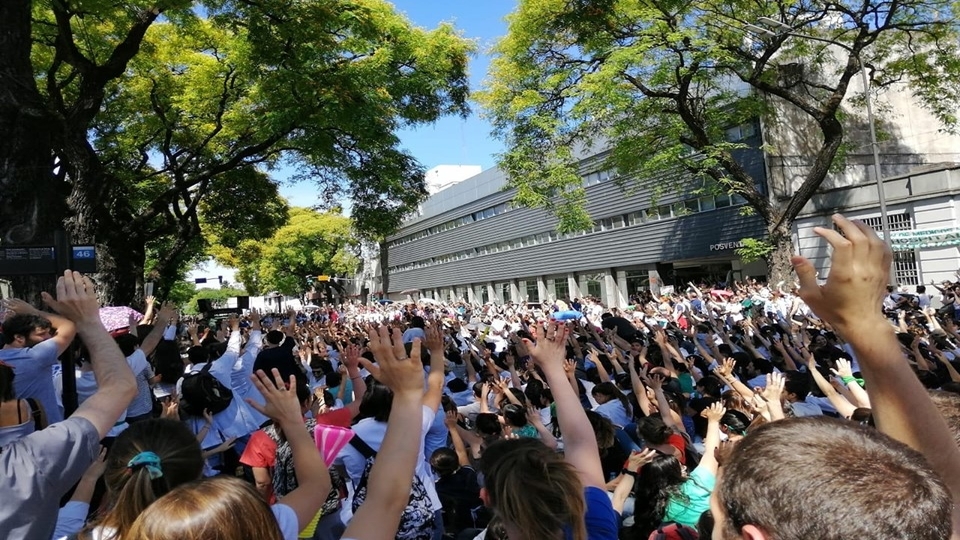 Young healthcare professionals staged a demonstration in front of the health ministry in Buenos Aires on December 2. Photo: Assembly of Residents and Concurrents of CABA/Facebook

Thousands of young Argentine healthcare professionals are set to stage a massive demonstration in Buenos Aires, Argentina on Wednesday, December 4, demanding the withdrawal of a law that does not recognize them as health workers and promotes their exploitation.

Over 4,000 medics and professionals have been protesting since November 28 against the Law of Residents and Concurrents of CABA*. The law was passed on that day by the ruling right-wing government in a session of the Buenos Aires City Legislature. It does not recognizer residents and concurrents as healthcare workers and defines them as trainees. It also disregards the nature of work in emergency departments and calls it a “continuous intensive training process.” The law sets a minimum workload of 36 hours and a maximum of 64 hours per week. It also takes away the right to take part in collective negotiation processes and reduces maternity or paternity leaves from 30 to 14 and stress leaves from 10 to 7.

The bill was presented on November 20, one week before it was voted. The Assembly of Residents and Concurrents of CABA, an organization that brings together these young medical professionals, claimed that the law was drafted without consulting the professionals who are involved.

On the day of the voting, hundreds of workers demonstrated outside the city legislature building demanding that the legislators stop the session and open a negotiation process. However, they were violently repressed by the city police with tear gas and sticks.

On November 29, the healthcare workers carried out a massive march in the capital to reject the anti-worker law, as well as the police repression of the peaceful protest. Thousands of medical professionals marched from Callao and Corrientes avenues to the Obelisk of Buenos Aires to reject the reform. The strike and mobilization continued on November 30 and December 1. The doctors have completely halted work.

On December 2, thousands of medical practitioners demonstrated outside the City Hall of Buenos Aires to demand the immediate annulment of the law. At the ministry, a meeting was held with the health minister, Ana Bou Pérez. It was attended by two representatives per hospital, both residents and concurrents. At the meeting, the representatives demanded that the minister veto the approved law. When she refused, the healthcare workers announced that the strike would continue indefinitely.

On Wednesday, the Assembly of Residents and Concurrents will set up a camp outside the Buenos Aires City Hall.

*Residence is a postgraduate, full-time and paid professional training system. Concurrence is a postgraduate, part-time and unpaid training system. Both are part of the Buenos Aires city’s health system. Healthcare professionals working in residence system are known as residents and those in concurrence system are known as concurrents.