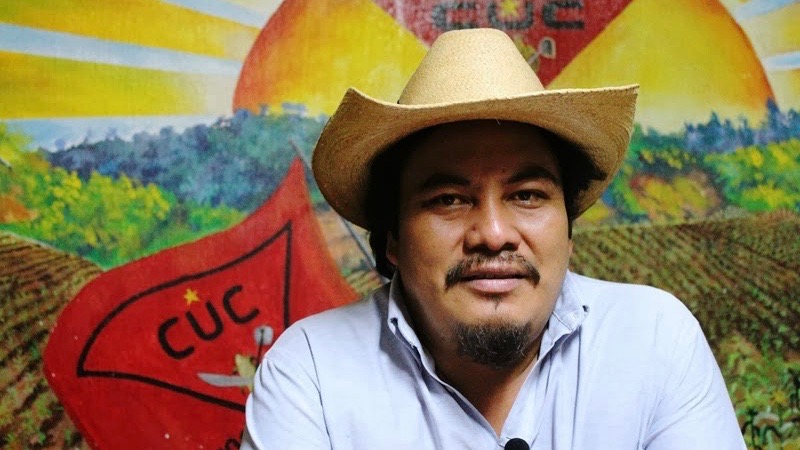 The legal process against Guatemalan Indigenous leader and human rights defender Daniel Pascual will begin today January 14, 2020 after having been suspended in 2016.

The legal process against Guatemalan Indigenous leader and human rights defender Daniel Pascual is set to begin on January 14, Tuesday. Pascual who is internationally recognized for his work in the Committee for Peasant Unity (CUC) has been charged with defamation, slander and injury by Ricardo Méndez Ruiz, the son of a former general and minister of the interior during the rule of war criminal and dictator Ríos Montt.

Social movements and organizations in Guatemala and the region alleged that the legal process, rife with irregularities and violations, is a clear case of persecution with political and racist motivations.

The case goes back to June 10, 2013, when Ricardo Méndez Ruiz, president of the Foundation Against Terrorism, pressed formal charges against Daniel Pascual for defamation, slander and injury. The charges are linked to statements that Pascual made during a press conference about an assassination attempt against him in San Juan Sacatepéquez amid conflicts over the construction of a cement plant in the municipality.

In the press conference, Pascual had revealed details about this assassination attempt and death threats he had received. These were part of a general trend of attacks and intimidation against Indigenous leaders in various areas of the country where there are extractive projects. This campaign of persecution, he noted, also included information and media attacks where columnists and dubious organizations such as the Foundation Against Terrorism, which he classifies as “pseudo clandestine organizations,” shared false information about him and other leaders.

Pascual’s defense team, as well as the CUC and other organizations, have pointed out that in accepting the case in a penal court, the judge violated the Constitutional Law of Free Sharing of Thought which outlines that in case of grievances, the case can be dealt with in the Press Tribunal. When this violation was presented before the court as grounds for the case to be removed from the penal court, the judge refused. This same judge soon announced that she would not continue with the case and declared that it was because Daniel Pascual and his defense team were not litigating in accordance with the law and that her personal integrity was at risk, though the real reason was because she retired.

The judge who took over the case summoned Pascual to court and warned that if he did not appear, he would declare him in contempt and would order his immediate detention, a warning that seems out of proportion given the consistent fulfillment of all court directives by Pascual.

Who is Méndez Ruiz?

Ricardo Rafael Méndez Ruiz is a businessman and the son of Ricardo Méndez Ruiz Rohrmoser who was a high ranking army official and minister of the interior during the rule of dictator Ríos Montt. He is a proud hard-line conservative and the tweet pinned on his Twitter profile since October 2018 is a photo of him along with former Colombian president and war-criminal Álvaro Uribe Velez.

Méndez Ruiz is the president of the Foundation Against Terrorism in Guatemala, an organization that is dedicated to championing the narrative of the right-wing and the army regardig the extremely bloody and violent civil war in the country. In the fight to annihilate the leftist guerrilla groups, the government, the army and paramilitary forces committed atrocious human rights violations including the murder and disappearance of over 200,000 men, women and children, the forced displacement of between 500,000 and 1.5 million people and the extermination of at least 440 Maya communities. Furthermore, thousands of women and girls were subjected to sexual violence by these forces.

The Foundation Against Terrorism tries to refute this harrowing legacy of the Guatemalan right-wing and armed forces by propagating the narrative that the army’s version is correct and that the genocide is a mere myth. They also attack contemporary social leaders and human rights defenders and allege they are terrorists or guerrilla fighters and even have brought forth charges against people like Daniel Pascual.

Who is Daniel Pascual?

Daniel Pascual Hernández is Maya k’iche’, and has been a member of the Committee for Peasant Unity – CUC – of Guatemala since he was 10 years old. He has held important responsibilities and leadership roles in the CUC and in national and international spaces of dialogue and diplomacy such as the United Nations and the National Council of the Peace Agreements in Guatemala.

In his role as a human rights defender and Indigenous leader, Pascual has been subjected to an intense campaign of threats, stigmatization, slander, criminalization, and even physical violence. He explained that the attacks directed against him are part of a broader trend: “Since 2013, we in the Committee for Peasant Unity – CUC – have been facing a new strategy, a wave of systematic attacks. Male and female comrades of the CUC have been assassinated. During the struggles, there have been violent evictions, criminal persecution, incarceration, and now, they are persecuting us, the national leadership of the Committee for Peasant Unity.”

Pascual, who previously was accused of terrorism, attempted assassination and affront to the constitution, and proved all of these accusations to be false, remains hopeful about proving his innocence in this case as well, “We are sure that we will win this case, that it will go well because the evidence that they present is inconsistent and of course weak,” he explained. However, he cautioned that there is a risk of them maneuvering “the attitude of the judge that will oversee the case, and that’s where we are worried because even though the evidence is not consistent, many times it is the interpretation of those who judge and say if the case will or will not advance.”

The CUC alleged that these criminal procedures against Pascual, “signify a setback in democratic liberties” that could “set a dangerous and violative precedent that implies grave consequences for citizens. The organizations said this was particularly for “social leaders who are suffering from open political persecution and could be accused and tried and incarcerated, just because of what they think and publicly share when they speak out against measures and policies that violate their rights.”

The court proceeding is scheduled to begin at 9:30 am local time and the CUC has called on supporters to rally outside the court in order to express solidarity with Pascual and reject the violative nature of the court.