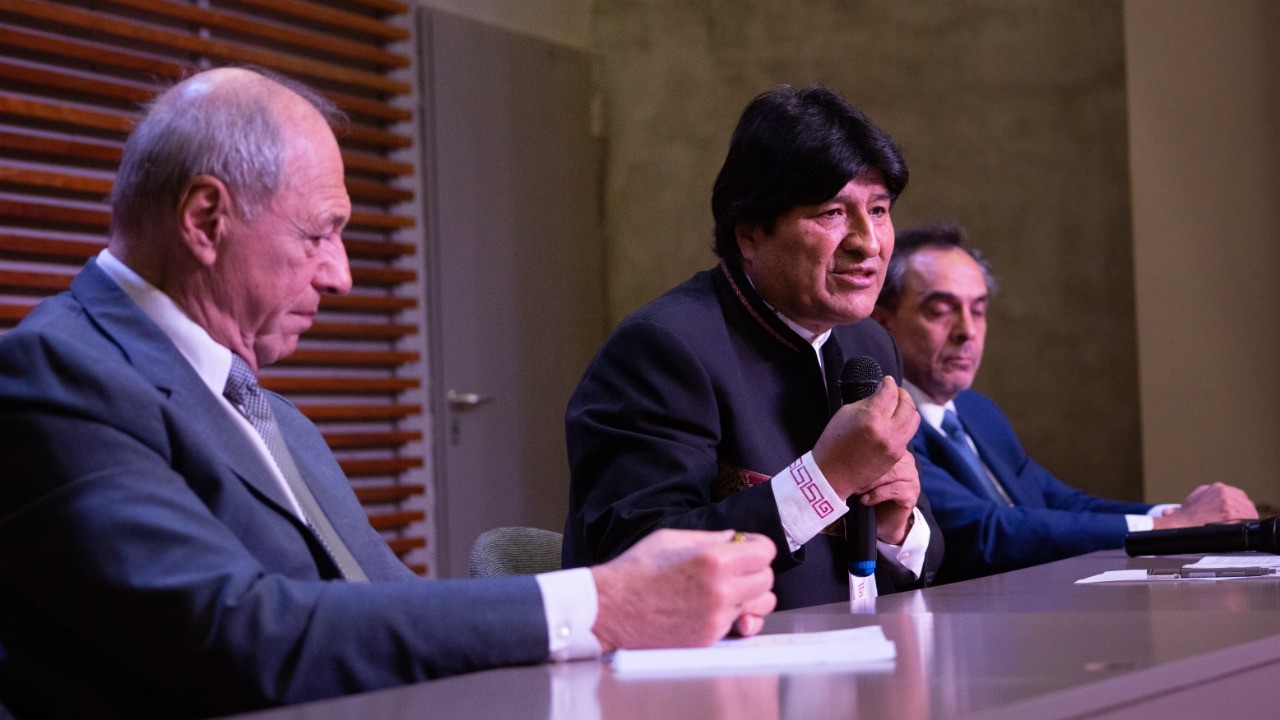 Evo Morales spoke in a press conference on Friday February 21 in Buenos Aires accompanied by former judge of the Argentinian Supreme Court Raúl Zaffaroni and lawyer Gustavo Ferreyra following the announcement that he would be disqualified as a candidate for senate. Photo: Prensa Evo

The President of Bolivia’s Supreme Electoral Tribunal, Salvador Romero, announced on Thursday February 20 that former president Evo Morales and former foreign minister Diego Pary are barred from participating in the upcoming elections. Both Morales and Pary had been registered as candidates for the Senate for Cochabamba and Potosí respectively. Romero announced that Morales and Pary did not meet the requirement of permanent residence in Bolivia.

The National Board of MAS denounced the announcement by the Tribunal and stated that it was “a political action to bar the participation of our candidates to the Senate, Evo Morales and Diego Pary, without any constitutional or legal support.” They also highlighted that the Tribunal also violated several regulations such as the Electoral Calendar and the Law of the Electoral System.

Evo Morales and two members of his legal team held a press conference on Friday morning in Buenos Aires, where Morales is currently living as a political refugee, to denounce the decision of the electoral tribunal and announce the measures they would take to appeal the decision. He was accompanied by former judge of the Argentinian Supreme Court Raúl Zaffaroni and by lawyer Gustavo Ferreyra, Morales’ legal counsel in Argentina.

In the press conference, Morales declared that his disqualification constituted “a second coup in Bolivia” and alleged that the members of the tribunal “are not guaranteeing clean and transparent elections and they are subjecting themselves to the dictatorship and North American policies.” He concluded that the coup regime “does not want me to return to Bolivia, [which is] an order from the US.”

While Romero announce that the tribunal approved the candidacy of MAS’ presidential candidate, Luis Arce, Morales and members of his legal team cautioned that Arce is still facing charges by the coup regime and with this precedence, they could still disqualify his candidacy.

Since the civic military coup d’état was carried out against Morales on November 10, members and supporters of the MAS party have been systematically targeted by the de-facto coup government led by Jeanine Añez. Following threats to their lives, physical attacks, as well as the filing of serious charges by the coup government, dozens have been forced to flee the country and some took refuge in the Mexican embassy in La Paz, where they remain today as they have no guarantees to safety or rights by the coup government.

Morales himself fled to Mexico following his forced resignation and threats to his life and grave acts of violence against members of his family. He arrived in Argentina on December 12 where he was offered political asylum while the situation calmed down in the country.

On December 18 the Attorney General of the de-facto government, Arturo Murillo, issued an arrest warrant for Morales and accused him of sedition, terrorism and financing of terrorism. The warrant calls for the Public Force to apprehend Morales and turn him into the attorney general’s office. In this context, Morales has been unable to return to his country and resume his normal life.

The persecution of MAS leaders has seen a considerable uptake following the announcement of their candidates for the general elections on May 3. Bolivian authorities have arrested several members of the party who have registered as candidates and also attempted to block the registration of several candidates, including Evo Morales.