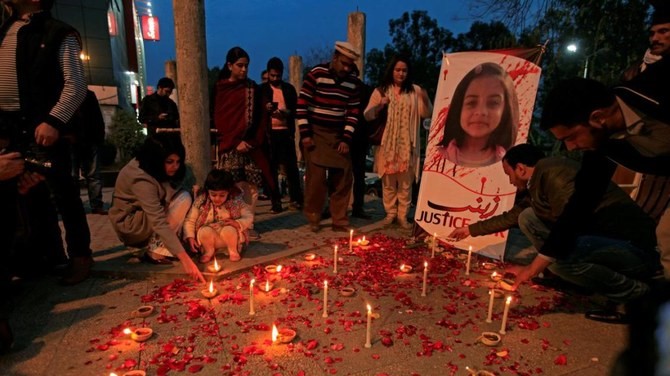 Members of Civil Society light candles and earthen lamps to condemn the rape and murder of 7-year-old girl Zainab Ansari in Kasur, during a candlelight vigil in Islamabad, Pakistan January 11, 2018. Photo: Reuters

On March 11, Wednesday, the Pakistani parliament passed the Zainab Alert Response and Recovery Bill 2019 – the country’s first national child abuse law, allowing life imprisonment for those found involved in the crime. The bill comes almost two years after the brutal rape and murder of a seven-year-old, Zainab Ansari, which had caught national attention and brought to fore the rampant child-abuse problem in the country. The bill now awaits formal clearance by president Arif Alvi, which is expected soon.

After the young girl’s body was fished out from a garbage dumb in Lahore’s Kasur district on January 9, 2018, protests erupted across Pakistan and forced authorities to take action against the accused 24-year-old Imran Ali. He was later convicted and was described by the government prosecutor, Ehtisham Shah, as a serial killer.

After the passage of the Bill which would facilitate a “speedy system of alerts, recoveries, investigations and rehabilitation” to prevent criminal activities against children, Pakistani human rights minister Shireen Mazari said: “Finally the Zainab Alert Bill sailed through the national assembly with a majority of votes… Has had many hiccups along the way but thank God, the Bill is on its way to becoming law.”

Child-related abuse is widespread in Pakistan, with nearly 10 cases being reported almost every day, a large number of which are pedophilic assaults against young girls. As per the new law, the police will be required to register a case within two hours of a child being reported missing.

Around 3,445 cases were recorded in 2017, with indications of an alarming increase in the number of child abuse cases in 2018. According to a government report, 141 cases were reported in the city of Lahore since January 2018. However, none of the suspects have been convicted so far.

The 2018 Cruel Numbers report suggested that 65% of the child abuse cases were found in the State of Punjab, followed by 25% in Sindh, 3% in Khyber Pakhtunkhwa (KP), 2% in Balochistan and 21 cases in Pakistan-administered Kashmir.

Notably, most cases of child abuse go unreported due to social pressure and the conservative nature of Pakistani society. According to the bill, “A helpline (1099) will also be established to specifically report such cases.”