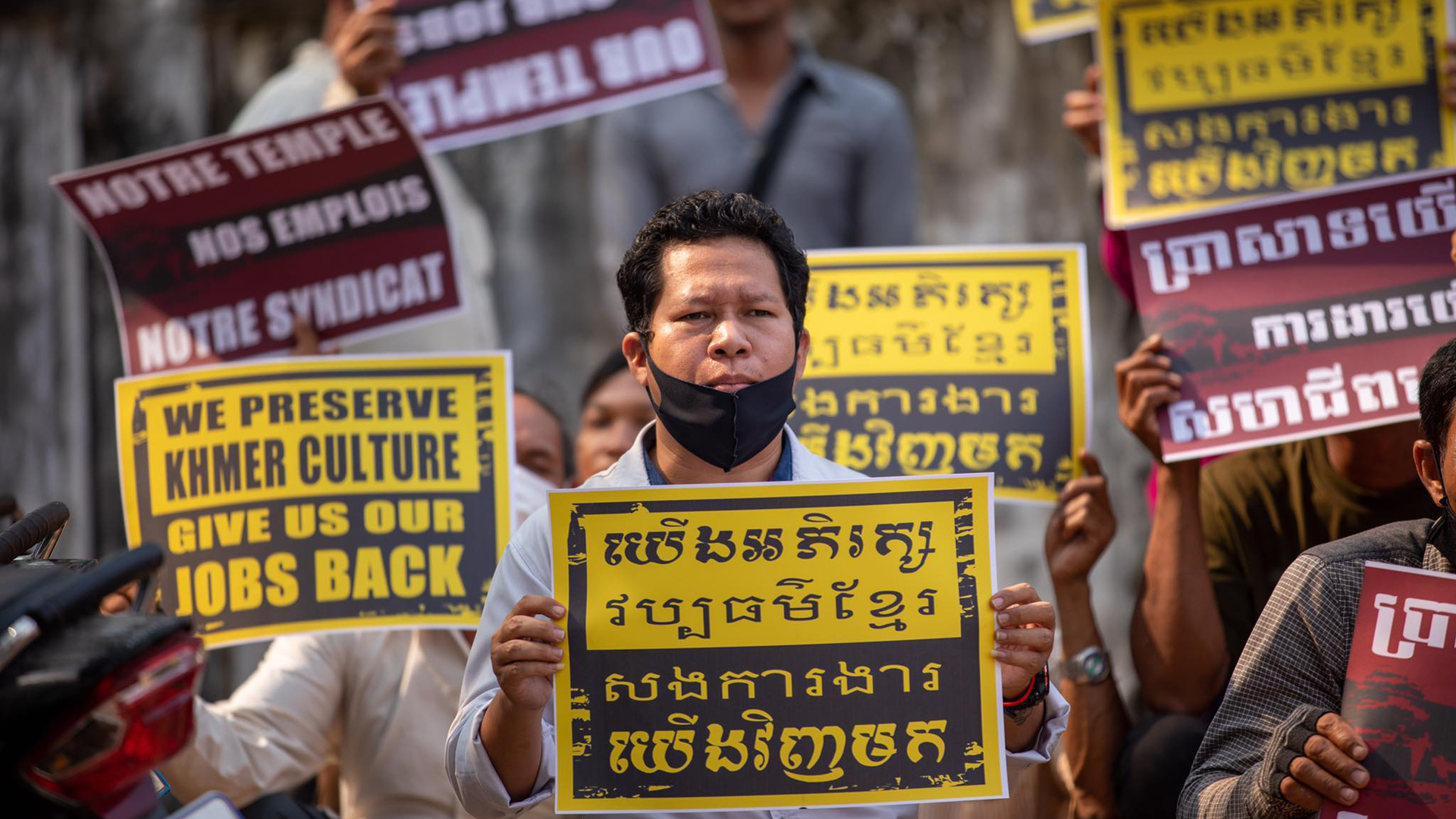 Workers protesting at Siem Reap, demanding reinstatement of their work, wearing masks as Cambodia is hit with the COVID-19 outbreak (Photo: CENTRAL Cambodia/Facebook)

Archaeological restoration workers of one of the Angkor Wat temples in Cambodia held protests in the cities of Siem Reap and Phnom Penh on March 16, Monday, demanding the reinstatement of dismissed workers and a hike in wages.

Protesters denounced the Paris-based French research institute, L’Ecole française d’Extrême-Orient (EFEO), and Cambodia’s Apsara Authority, and marched with placards reading “We preserve Khmer culture”, “Give us our jobs back”, “Our Temple, Our Jobs, Our Union”, and other such slogans.

In 2018, workers restoring the West Mebon Temple suffered major wage reductions and even job losses as the EFEO abandoned the restoration project citing lack of funds, and handed over the work to Apsara.

According to the Center for Alliance of Labor and Human Rights (CENTRAL), this was despite the revenue from ticket sales at Angkor Wat having gone up considerably, a claim substantiated by the official revenue data put up by the authorities. Thus, the lack of funds cited by EFEO for abandoning the project puzzled observers.

In 2017, despite hiking the rate of entry tickets, the site received a record number of visitors and saw a jump of 71% in revenue through ticket sales, reaching USD 108 million for the first time. The following year, despite a slowdown in growth, the revenue peaked at USD 117 million. Even after the decline in ticket sales in the first three quarters of 2019, the temple complex raked in close to USD 70 million.

In September 2018, the union representing 126 workers at the project rejected the wage and remuneration offer made by the Apsara Authority. The workers demanded either wages at par with the EFEO or handing over the project back to the French institute.

Several employees have since been laid off and replaced with new ones willing to work on Apsara’s terms.

A parallel demonstration was also held at the French Embassy at the capital of Phnom Penh on Monday.