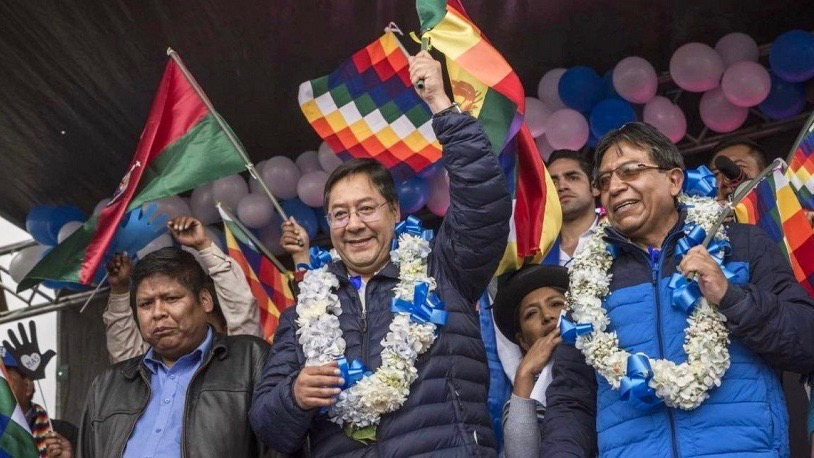 According to an opinion poll carried out by the Bolivian pollster Ciesmori this month, Luis Arce and his running mate David Choquehuanca of the Movement Towards Socialism party (MAS), are preferred candidates in the general elections set to be held on May 3. The MAS presidential ticket leads the voting intention polls with 33.3%. While in second place is former president, Carlos Mesa, with 18.3%. The current far-right coup installed president, Jeanine Añez, is placed third in the polls with 16.9%.

Following the top three candidates are Luis Fernando Camacho of the Creemos coalition with 7.1%, Chi Hyun Chung of the Front For Victory with 3.8%, Feliciano Mamani of the National Action Party with 1.9%, and Jorge Quiroga of the Libre 21 alliance with 1.7%.

The survey was conducted between March 5 and 11 and around 2,243 citizens in 100 urban cities and rural towns across the country were consulted.

Earlier this year, a similar poll on voters intention conducted in the month of February also showed a tendency that favored the MAS candidates with 31.6% of votes.

The Ciesmori poll results, that gave the MAS ticket a lead of 15% over their immediate competitor, are significant and positive for the MAS party. It comes in the time when party leaders, including the former president Evo Morales, have raised concerns of a possible fraud in the upcoming presidential elections.

According to the Constitution of the Plurinational State of Bolivia, in order to win the Presidency of the Republic in the first round, a candidate has to win more than 50% of the votes or more than 40% of the votes with a 10% lead over the second most voted candidate.

After the coup d’état against the constitutional government of the MAS and the democratically elected president Evo Morales last November, the political situation of the country has been delicate. Complaints of police brutality, racist, patriarchal and political persecution have been constant.

A recent example of the same was witnessed on March 15 when the new president of the Supreme Electoral Tribunal of Bolivia (TSE), Salvador Romero, appointed by the de-facto government, disqualified more than 147,000 citizens from voting in the 2020 general elections.

Among the disqualified citizens, hundreds are grassroots activists and leaders associated with the MAS. In addition, tens of thousands are people from rural areas of the country, where the MAS has historically had more presence and popular and electoral support.

The reasons given by the TSE president for disqualifyling the citizens include documentation errors, underage, interdepartmental registration, possible double identity or identity theft and citizens who did not vote in the 2016 referendum or judicial elections in 2016.

The departments of Santa Cruz, La Paz and Cochabamba have the highest number of disqualified voters. These citizens can claim their right to vote and re-register themselves online, in the departmental election offices and in the consulates or embassies in case of a citizen living abroad until March 22.

Presently, the MAS is running an information campaign on social media with hashtag #CuidemosNuestroVoto (#Let’sTakeCareOfOurVote), calling on people to remain alert, defend their right to choose and vote and constantly verify their registration in the corresponding departmental electoral offices.

With the upcoming elections, MAS and the majority of Bolivians hope to overcome the crisis that cost the lives of more than 30 people in the post coup police and military repression and violence.