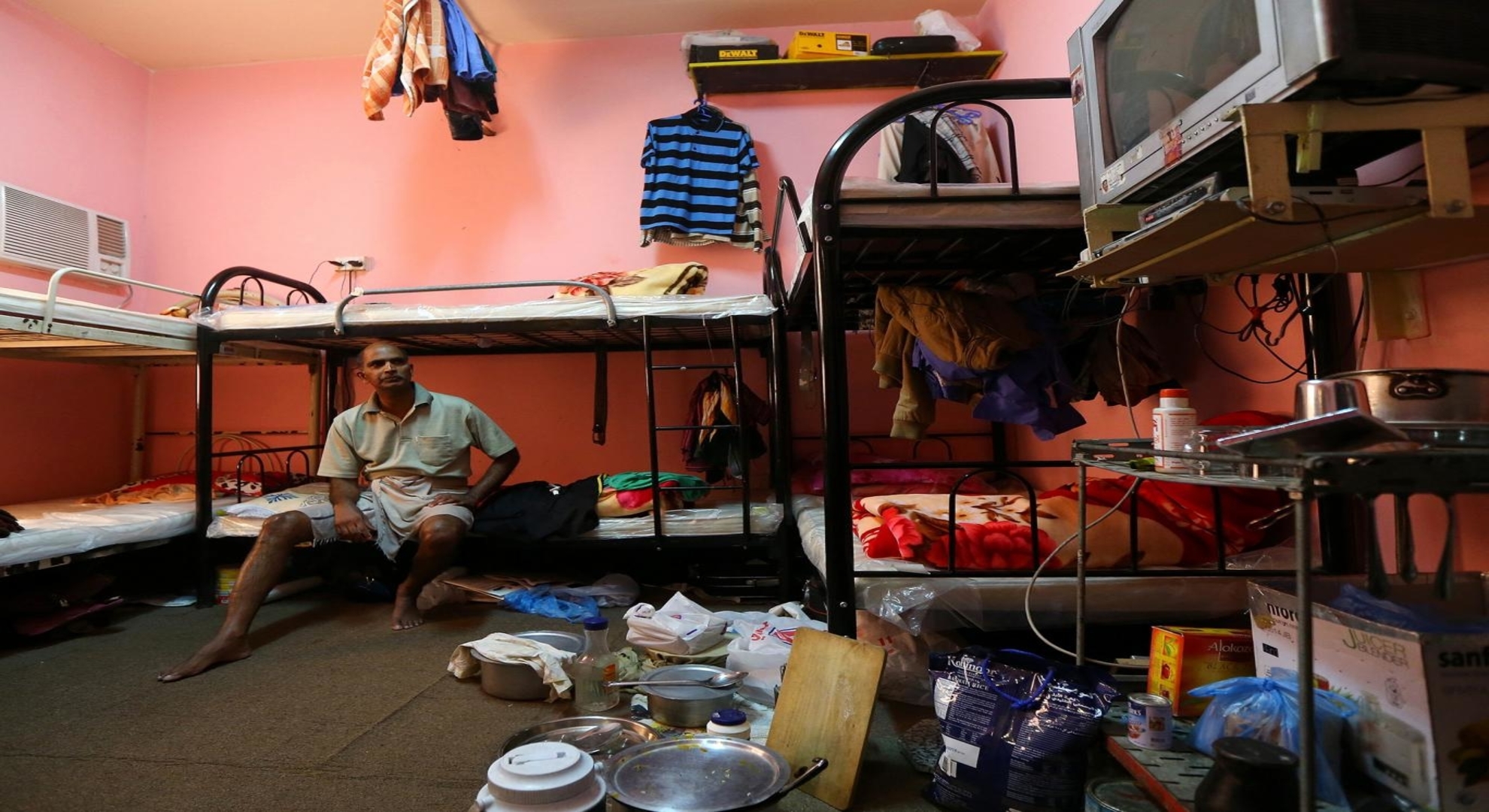 In countries like Qatar, migrant workers are often housed in densely populated camps with very few amenities. Photo: The Independent

The condition of millions of expatriate or migrant workers in the six countries of the Gulf Cooperation Council (GCC) has always been a major cause of concern. However, the outbreak of the COVID-19 pandemic has deepened these concerns.

All the GCC countries have reported cases of COVID-19 infections with Saudi Arabia alone recording close to 2,200 cases and 29 deaths as of April 4. The UAE had over 1,500 cases and 10 deaths; Qatar had 1,075 cases and 2 deaths; and Bahrain had 678 cases and 4 deaths. Kuwait had reported close to 480 cases with no deaths so far while Oman had 277 cases with one death.

Every country in the region has taken routine and in some cases, extraordinary cautionary measures. These include strict lockdowns and social distancing practices.

The oil producing province, Qatif, in Saudi Arabia, where the first cases of COVID-19 in the country were recorded, has been locked down for almost a month now.

On April 1, Qatar announced the closure of all of its industrial areas and activities, barring essential services. The country had closed down other commercial activities earlier.

Saudi Arabia announced a country-wide 24-hour curfew on April 2 and shut down all religious sites, including at Mecca and Medina. It has asked pilgrims from all across the world to defer their preparation for the annual Hajj which was scheduled in June. Around 2.5 million people visit Saudi Arabia every year for the pilgrimage.

Given the fact that most of these countries have relatively better medical facilities and enough resources to mobilize medical supplies, the danger seems less palpable. However, a majority of residents in these countries are not citizens. They are migrant or expatriate workers and these countries have a history of discrimination against them that is rooted in racial and class prejudices. This has led to concern on the fate of these migrants.

The image of a migrant worker being forced to serve as a mobile hand sanitizer dispenser was a poignant reminder of their state.

Most of these migrants hail from developing countries in south Asia, eastern Africa and south-east Asia. They die in thousands every year. For example, last year, the government of India revealed that around 34,000 of its citizens died while working in the GCC countries between 2014 and 2019 alone. Around 8.5 million Indian citizens work in these countries.

Workers in Saudi Arabia have also been complaining that they are forced to work at a time when their local counterparts are given paid leave.

Some workers are also deported by the authorities. A group of 20 Nepalese workers was deported for violating the quarantine rules despite the fact that Nepal has banned entry of workers from countries with cases of infection.

Though most of the GCC countries have announced economic stimulus and relief packages for private companies, it seems the latter are not passing it to the workers. For example, the UAE announced a relief package of around USD 35 billion and Qatar and other countries have taken steps to mitigate the economic effects of the pandemic. However, whether the benefits will reach the migrant workers is a real issue.

Many of those employed in small businesses such as in beauty parlors, delivery services, shops and in malls are apprehensive about their wages in particular.

At a time when COVID-19 has halted most economic activities, the families of these workers and the countries dependent on remittances wil struggle if salaries are not paid. A large number of families in countries. including India which received almost $80 billion in remittances (it is equal to 2.7% of Indian GDP) in 2018, Pakistan ($21 billion), Bangladesh (around $16 billion), Philippines ($34 billion), Nepal and most of the east African countries would be in real trouble.

The fall in the global prices of oil and gas in the recent months has also created a pressure on existing jobs. The global demand for energy has gone down tremendously due to lockdowns imposed to fight the COVID-19 outbreak, including in the world’s largest consumer, China. It has also gone down because of the excess supply due to the inability of oil producing countries to agree on a production cut.

The income from the export of energy products is crucial for all the countries in the GCC. Except for the UAE, no other country in the region has been able to diversify its economy. Even in UAE, income from energy exports remains crucial for economic health. Hence, with oil prices hovering around USD 20 per barrel, the fate of hundreds of thousands of jobs in these countries is uncertain.

Due to the implementation of travel bans in order to stop the spread of the virus, it is very unlikely that any of the countries these migrants hail from will take steps to bring them home.

Most of the localities or camps where these migrant workers live are overcrowded, unhygienic and susceptible to the transmission of the disease. In many of these camps, eight to 10 people often stay in one dormitory room.

According to the International Labour Organisation (ILO), though some companies have shifted a section of the workers to better facilities fearing the outbreak, most of the workers are still forced to live in those camps in the absence.

Some of these workers have taken it upon themselves to clean the common areas. It is very difficult for them to maintain any kind of social or physical distance.

The Guardian reported on March 20 that the largest migrant camp in Qatar was quarantined when 238 workers tested positive on March 11. An additional 111 cases were reported as of March 15. However, the virtual lockdown of the camp has created risks for other workers.

The government in Saudi Arabia made a welcome announcement of paying for the treatment of all residents who have contracted the disease. However, it remains unclear whether the government will also protect their salaries and jobs.