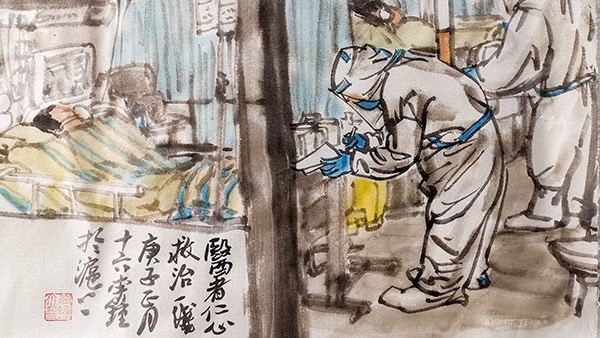 9 April 2020, Shanghai. We sat down with Li Zhong (李钟) at a small open-air tea house run by a friend of a friend; Zhong is a painter of the Shanghai Academy of Painting and Calligraphy and president of the Fengxian District Artist Association. A man in his forties, Zhong wore a navy blue blazer and jeans, and, of course, a face mask. Even three months after the COVID-19 epidemic began, in Shanghai – a city relatively sheltered from the virus that has resumed daily life – 100% of people still wear masks while outside of their homes. The masks may prevent us from recognizing each other in the streets, but still we can smile behind them.

And there is reason to smile – the 76-day lockdown of the hardest-stricken Chinese city of Wuhan had been lifted just over 24 hours before we met. ‘This is a very exciting moment for the Chinese people,” reflects Zhong. ‘This means that China has defeated the virus and people all over China trust science. But we cannot stop being vigilant or all our previous efforts will be for nothing.” He is referring to the worries over the recent rise of imported cases of the virus and the fears of a second wave of the virus in China.

We came to know of Zhong through a series of paintings he made in solidarity with the workers fighting COVID-19 in Wuhan. The scenes portray sensitive, everyday moments in a traditional Chinese ink painting style – shades of black ink with colour accents, most prominently the blues and reds of medical outfits. A traffic officer slurping down his cup of instant noodle, still in uniform. A security guard catching a brief nap during the intensive work nights and days. Workers taking temperatures, sewing personal protective equipment, clearing garbage, and delivering supplies. Workers who, behind masks, become anonymous and, in a series, become whole. Zhong began posting these images on his WeChat ‘moments’ (similar to ‘stories’ on other social media platforms), which were circulated and eventually reached some news outlets. Little has been told, however, about the origins of the paintings and who was behind them, so Tricontinental: Institute for Social Research spoke with Li Zhong in Shanghai.

“Well, this was a special year,” Zhong told us. After briefly introducing himself, Zhong dove into the sequence of events of the COVID-19 epidemic, which moved him to paint: “I was recording the process of how the Chinese people fought the virus; it’s a kind of record of the Chinese people’s bravery.”

He is an artist who deeply believes in science. He categorized his work meticulously: Raging Epidemic, Frontline Warrior, Grassroots Perseverance, Logistical Support, Suspension of Classes, and Anti-Epidemic Sketches. But he is reluctant to speak about himself as a protagonist in this story. Instead, he talks about socialist values. He commends the government’s decisive actions; over the past two months, millions of people have been mobilized across the country to do frontline work, while most of the 1.4 billion population is in some form of lockdown.

“The reason why I created the paintings was to show the benefits of a socialist country, and this is different from capitalism in the West. As an example, Chinese people are a people for whom solidarity is key; we are a hardworking people. During New Year’s Eve, Chinese families gather together. However, many people sacrificed this precious time with their families to help fight the virus. Many medical staff went to Wuhan. I was very touched by these actions. They are so noble, but they are just ordinary people like us. They are not only the medical staff, but also grassroots staff and officials, community staff, many people who gave up their traditional festival. And this is difficult for other countries to do,” he explained. (More on the mobilization of neighborhood committees and medical workers in part 3 of the CoronaShock series, How China Broke the Chain of Infection). Tribute to an angel – a different New Year’s Eve dinner (致敬天使·不一样的年夜饭) features two medical staff hastily eating a meal while squatting, still in medical gear. A ‘different’ meal is also portrayed in a different style. He deploys a traditional Chinese style of painting in service of the contemporary moment, to ‘develop the new from the old’, as Mao Zedong himself might have called it. Ink wash painting emerged during the Tang Dynasty and is common throughout East Asia. Its characteristic black ink, diluted to various concentrations and shades, is painted onto a highly absorbent and delicate rice paper. Once a stroke is painted, it cannot be modified or undone. Its ability to capture a moment is not measured by its realism but by its essence – it is a snapshot that already begins to fade once the brush meets the paper, as if changing with the speed of the virus itself.

In the tradition of socialist painting, Zhong turns our gaze to the workers – the subjects who have consistently been excluded from bourgeois painting and who are now absent in the Western media’s portrayals of China’s response to the pandemic. “Across the world, people may say bad things about China, but this experience has changed their view totally. They surprisingly never considered the solidarity of Chinese people… but right now across the globe,” he mentioned, “everyone is asking China for help and we are the only ones helping. China has helped 120 countries, both with supplies and staff.”

In celebrating those who labor, Zhong himself also went to work. During his self-quarantine of one and half months, he created 129 paintings – creating more than two new paintings a day. His social commitment is clear, both as an artist and as a member of the Communist Party of China. Zhong studied and referenced images from the online and televised reporting in China, “which showed a lot of the workers’ perspective.” The paintings have also gone back to the workers themselves, such as the twenty medical staff from his community who went to Wuhan. The paintings gave them courage and encouragement. “They told me that my paintings reflect the truth of the outbreak. In the future when they see my paintings, we will not forget,” Zhong explained.

At Tricontinental: Institute for Social Research we are engaged in a battle of ideas, which we understand is also a battle over the visual. Zhong made art that contests in this battle. He made art “to show the soldiers who are fighting against the virus, and these soldiers don’t just include medical staff. This includes the people staying at home, they are also fighters.” He invited us to see a different representation. One of his paintings features a child at a drawing board, coloring in block letters. It reads Stop class, but don’t stop learning (抗击疫情停课不停学). “Because of the virus children cannot go to school,” Zhong explained, “The experts say that the virus can be transmitted from person to person. So, the schools had to be closed. Students must remain in quarantine, so the students are drawing comics in support of the medical workers.” It is a drawing within a drawing, a record of a record being made.

As for artists, what can we do? “They can reflect the situation positively. They should be true. Don’t blame other countries or spread misinformation, because the biggest challenge is to defeat the virus, which requires our unity,” Zhong commented. As soldiers in this international battle against the COVID-19 pandemic, whether working at the frontlines or behind the scenes, quarantined at home or out of a home, caregiving or being cared for, at your computers or at your easels, Zhong reminds us to be scientists, to learn, and to be true.

Tings Chak is the lead designer and researcher with Tricontinental: Institute for Social Research.