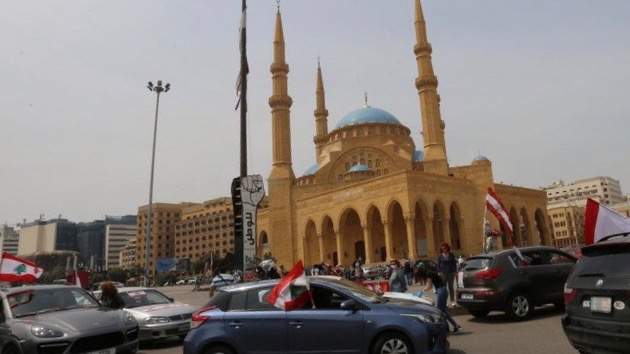 People protest outside the conference hall in Beirut where a parliamentary meeting was called by speaker Nabeel Berry on Tuesday. (Photo: Reuters)

Lebanese citizens in several cities returned to the streets on April 21, Tuesday, to protest the government’s failure to tackle rising poverty and hunger in the country. A large number of protesters gathered and shouted slogans from inside cars in order to maintain physical distancing norms in light of the COVID-19 outbreak. In Beirut, protesters marched towards a parliament meeting called by speaker Nabeel Berry in a conference hall to enable social distance measures between the legislators.

The government has imposed a partial lockdown since March 15, along with a night curfew, as part of the measures to contain the virus spread. Lebanon has 677 confirmed novel coronavirus cases, resulting in 21 deaths, as on April 22 morning.

The financial crisis in the country, with one of the worst debt-to-GDP ratios in the world, has deepened sharply due to the pandemic. A large number of people have lost their jobs during the lockdown and inflation has risen to 27%. Banks have imposed strict curbs on the withdrawal of money, depriving people from accessing essential cash at the time of an emergency.

With the deepening crisis, several reports of people attempting self-immolation due to desperate economic conditions have appeared in the local media.

Last month, the country also defaulted in its payment of international loans. The parliament further approved fresh loan demands to the World Bank on Tuesday to deal with the impact of the COVID-19 pandemic and the resulting financial distress,

Lebanon has witnessed popular anti-government protests since October last year. The protests led to the resignation of then prime minister Saad Hariri. However, it was only in January that his successor, Hassan Diab, was appointed as the new prime minister.

While the protests had wound down in most parts of the country after the pandemic broke out, they resumed last week in Tripoli, one of the main cities, and spread to several others yesterday.

The protests in Lebanon were triggered due to widespread perception of corruption among the existing political and business elite. People blame systemic flaws of the Lebanese political system as the reason for poverty and unemployment in the country and have been demanding a complete overhaul.