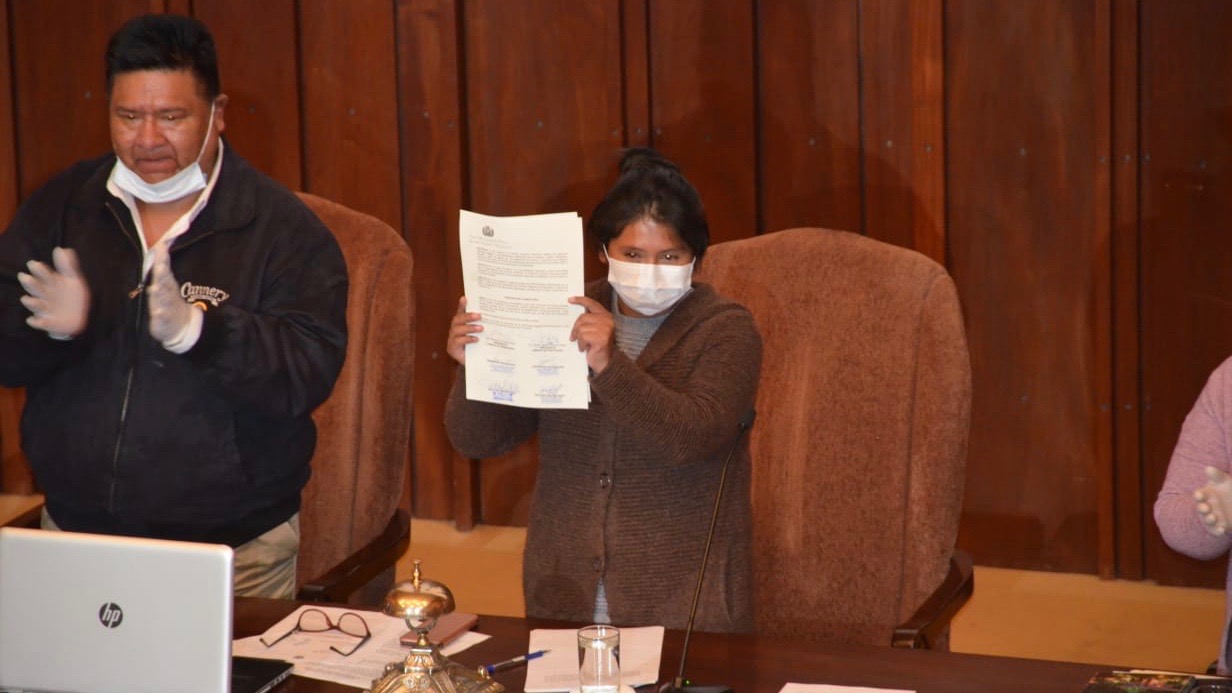 Bolivia experiences new political tensions amid the global COVID-19 pandemic, after the 2020 General Elections Postponement Law was passed that establishes a maximum period of 90 days to hold the general elections in the country.

Last week, late night on April 30, the Plurinational Legislative Assembly of Bolivia promulgated the electoral law and called on the Supreme Electoral Court of Bolivia (TSE) to define a date between May 3 and August 2 for the polls to elect country’s new president, vice president, senators and deputies.

However, the coup-installed regime rejected the decision on the pretext of the health emergency due to the coronavirus disease. The far-right leader of the de-facto government, Jeanine Añez, denounced the decision and accused the Movement Towards Socialism (MAS) party, which holds a 2/3 majority in the parliament, of risking the lives of millions of Bolivians in a bid to regain power. The Minister of the Presidency, Yerko Núñez, warned that he would report the enactment of the law to the international community.

Meanwhile, the MAS, through a statement, recalled that the international community, during the 2019 crisis, called on the country to hold elections as soon as possible and that according to the Bolivian Constitution, the established term is of 90 days.

Former president Evo Morales defended the Plurinational Legislative Assembly’s decision and said that the country’s population demanded elections. “The TSE of Bolivia is the body that must define the date of the elections within 90 days taking into account the Law of the Legislative Assembly, approved in compliance with procedures, and also that more than 83% of the population demands early elections and complete democracy,” tweeted Morales on May 3.

On April 29, Bolivia’s Chamber of Deputies met to set a date for the general elections in the country, which would have been held on May 3 but were suspended due to the novel coronavirus. The TSE, which is under the direct control of the coup regime, proposed to hold elections on a non-defined date between June 28 and September 27. But it was turned down by the majority. Instead, the deputies approved a bill that called to hold elections within a 90-day term, beginning from May 3, the originally scheduled date to hold these elections before their postponement.

The bill also regulates the special circumstances for the polling process due to the virus. It authorizes the TSE to fix the date of the new elections in accordance with technical criteria of the body and with medical scientists to guarantee the right to vote in the best conditions that the circumstances allow to not imply the spread of the COVID-19.

The bill endorsed by the deputies was debated and approved in the Senate the next day, on April 30. It received broad support not only from MAS but also sectors of the opposition. The same day, it was sent to the government palace, to the de-facto president Jeanine Áñez for her approval. However, she rejected it and returned it to the parliament, raising concerns about the spread of the coronavirus. Her justification, nevertheless, was contradictory to her intentions to end the quarantine and restart economic activities in the third week of May, after the compulsory lockdown ends on May 10.

Far-right Áñez, who is a presidential candidate in the upcoming elections, immediately rejected the decision.

In response to the coup regime’s reaction, President Morales wrote in a tweet that “the de facto regime once again demonstrates its desire to extend its rule. The legislature has passed a law in the time frame proposed by the Supreme Electoral Court. The people want democracy to be restored. The regime is not interested in Bolivians’ health. It is interested in assaulting the State.”

Why is the coup regime rejecting the law?

The coup regime is well aware of the popular support that the MAS has in Bolivia. The de-facto government knows that democratically it won’t be able to come back to power, especially given the growing divisions within the opposition.

In the October 2019 elections, which were eventually nullified over falsified allegations of electoral fraud and used to drive the violent anti-government protests and military coup that forced Morales out of office, gave a clear fourth-term victory to the MAS.

The latest opinion polls ratified this tendency in the upcoming elections. All the polls on voters intention, carried out in the first quarter of the year, showed that Luis Arce and his running mate David Choquehuanca of the MAS party were preferred candidates in the general elections.

In an interview with Bolivian journalist, Oliver Vargas, Luis Arce talked about how COVID-19 is being used as a pretext to postpone elections by the coup government. He also talked about how the coup regime expelled hundreds of Cuban doctors and medical personnel, drastically reduced the level of cooperation with Russia and China, halted large-scale health care projects begun under Morales’ administration, and drastically cut or effectively discontinued cash transfer schemes under a number of social programs.

Since seizing power after the military coup on November 10, Áñez has repeatedly promised that elections will be held and has continuously postponed them. Many analysts believe that the de-facto government is taking advantage of the pandemic to consolidate its power and further delay the return to democracy in Bolivia.

They also believe that the delay in elections has benefited Áñez, who is eyeing on making profits from the country’s natural wealth, i.e. its lithium reserves. She is privately campaigning among the Bolivian elites and entrepreneurs, who intend to sell this precious resource to private American companies, something that President Morales always opposed, defending its nationalization in order to share the gains from it equally with all the Bolivians.

The coup regime argued that it rejected the law for the well-being of the Bolivians. However, in reality, during the coronavirus lockdown, the government has failed to take measures ensuring the supply of essential items, such as food and medicines, in poor neighborhoods and Indigenous communities. There are no economic guarantees for informal workers who have lost their income because of the national quarantine. A large part of the population is starving.

In the past one and a half months, several protests have been held in different parts of the country denouncing the government for not providing aid and disregarding the safety and well-being of its most vulnerable population.

For this reason, several Bolivian citizens, Indigenous organizations, social movements and trade unions supported Senator Copa’s decision and celebrated the law that establishes a maximum term of 90 days to carry out the presidential elections.

On April 30, in the evening, thousands of Bolivians banged pots and pans against hunger and set off firecrackers and fireworks to celebrate the call for elections.