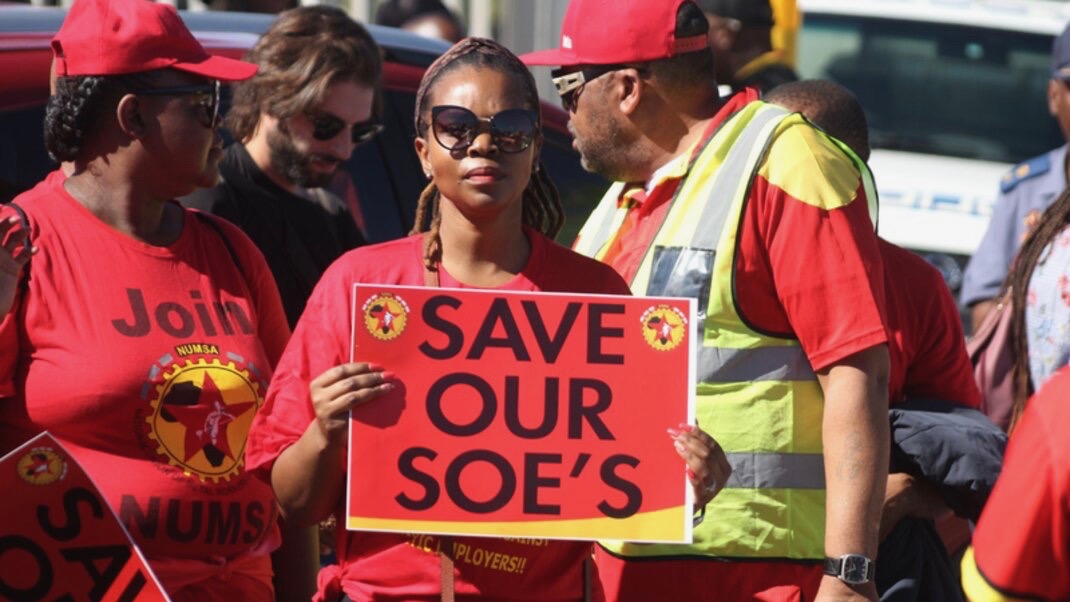 NUMSA member with a sign "Save our State Owned Enterprises"

In a judgement on May 8, the Labor Court in Johannesburg struck down the section 189 notices issued by the Business Rescue Practitioners (BRPs) to begin the consultation process to retrench almost all the 4,700 employees of South African Airways (SAA).

According to the proposal presented by the BRPs, all the employees accepting the retrenchment would have been provided with one month’s wage in form of notice pay, in addition to payments for outstanding leaves and a week’s pay for each year employees were with the company.

The finances required to pay this severance was to be raised by selling out the assets of this state-owned strategic enterprise to private companies. NUMSA General Secretary Irvin Jim had warned that “no asset lists, let alone valuations of these assets, are provided to support the promise to pay retrenchment packages out of the sale of unencumbered assets.”

He had further cautioned that “the payment of any retrenchment package is subject to substantial conditions and lengthy delays…The best case scenario, if everything goes according to the BRPs’ plan, is that retrenched workers will be paid in 30 months’ time!”

The BRPs did not engage with unions that had been proposing an alternative plan to revive the financial situation of SAA that did not involve laying off the entire workforce. Instead they alone had come to the conclusion that the only alternative to this winding down of the company was to liquidate it. As Jim highlighted this option would have caused employees to lose their jobs with no guarantee of any severance pay.

Refusing to bow under such pressure, the National Union of Metalworkers of South Africa (NUMSA) and the South African Cabin Crew Association (SACCA) had dragged management and the BRPs to the labor court, filing an urgent petition on May 7 to stop these retrenchments.

The judge accepted the unions’ argument in court that the BRPs, who are appointed mainly to workout a business rescue plan, may not initiate the retrenchment process, except as a part of the rescue plan itself. Since the BRPs have presented no rescue plan for SAA, their issuance of Section 189 (3) notices is “procedurally unfair”, the judge concluded, ordering them to be withdrawn.

Section 189 (3) of the South Africa’s Labor Relations Act (LRA) mandates that an employer, before undertaking retrenchments, must hold consultations with the affected employees, or with the unions representing them where they are present.

These consultations are supposed to explore alternatives which can address the operational constraints without dismissals, and where none exist, to arrive at a fair agreement over the retrenchment package.

The BRPs who issued these notices had taken charge of the company on December 5 when the SAA management had placed the airline under voluntary business rescue. South Africa’s Companies Act allows financial stressed enterprises – which are on the verge of being insolvent within six months unless drastic measures are taken to revive its finances – to be placed under business rescue.

During this period, the enterprise is protected from claims by creditors, giving time for the BRPs, under whose command the company is placed, to work out a plan to prevent its liquidation.

Prior to the business rescue plan coming into effect, the Section 136(1) of the Companies Act stresses that the employees “continue to be so employed on the same terms and conditions” as before, unless the employer and the employees, or their unions where they exist, mutually agree to change the terms.

The only exception made in this section is in the case where, “changes occur in the ordinary course of attrition.” While pointing fingers to the prolonged grounding of flights due to the lockdown as the main reason in recent press statements, the SAA management and the BRPs did not claim in the court that this could qualify for the exception made in the section.

This is because the retrenchment notices were issued on March 9, before the lockdown had been imposed. On February 6, well before the first case of COVID-19 was detected in South Africa, the BRPs had also closed down several domestic, regional and international routes, providing an indication of the retrenchments to come.

Even before the company was placed under business rescue under the command of BRPs, the Section 189 (3) notices had already been served by the SAA management, stating the poor financial condition of the airline to be the reason.

The unions however pushed back, claiming the financial drain of SAA was not because of the expenditure on paying the employees, but due to overpriced contracts given out to private companies to which services – which could have been undertaken directly by the SAA at a much lower cost – have been outsourced.

Following a week-long strike in November, these notices were deferred and eventually forgotten. In the agreement which brought the strike to an end, the management had agreed to set up a task force to identify such overpriced contracts, which would then be either renegotiated or cancelled and insourced.

However, no work was done in this direction, and the BRPs who subsequently took charge did not follow up on this agreement. Instead, without presenting any business rescue plan, the BRPs went ahead with issuing Section 189 (3) notices, in violation of the Companies Act’s Section 131 (6).

In its first line of defense, the advocate representing the SAA management and the BRPs argued that the labor court had no jurisdiction to determine matters regarding violations of sections under the Companies Act.

Agreeing that the labor court is not authorized to decide on compliance with provisions under the Companies Act, the judge said “generally speaking, this court’s jurisdiction is limited to disputes arising within the scope of the LRA.”

Nevertheless, the dispute over the jurisdiction was resolved in favor of the unions on the grounds that the application filed by the latter was based on the readdressals provided for in Section 189A (13) of the LRA. Further the remedy sought by the unions was an order to rescind the Section 189(3) notices, also issued under the LRA.

By providing this clarification on jurisdiction of labor court in cases where sections of the Companies Act are sighted, the judgement also sets an important jurisprudence which may impact future cases.

The Unions pointed out that the Business Rescue Practitioners, who have been in command of the national airline since December, had issued Section 189(3) notices to begin consultation for retrenchment of virtually all the staff, without presenting a Business Rescue Plan. The judge agreed that such an act is “procedurally unfair” and ordered withdrawal of notices.