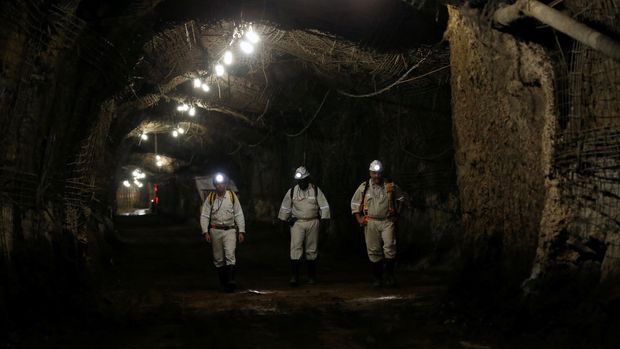 Mine workers in South Africa.

South Africa’s third largest gold mining company, Harmony Gold, has allegedly abandoned at least sixty miners, who on the company’s instructions, had returned to work at its Kusasalethu mine in the commercial hub of Johannesburg.

On arrival, however, many of them were told they could not be assigned work because the mine was only permitted to work at 50% capacity. The number of miners who came to work from their native places, after the company asked them to return to the mines, exceeded the number required to operate at 50% capacity.

At least 60 miners have been stranded in overcrowded, unsanitary hostels for over a week now, with no money to return home. Most were not paid their full salaries for the month of April which has made their conditions even worse.

The company has not fulfilled its promise of arranging transportation for the workers to return back to their homes in their native towns and villages from where they had arrived.

“They are unable to practice social distancing in the hostels, and worse, they do not have sanitizer, which places employees at risk of infection. The management of the mine is failing to comply with health and safety standards,” the National Union of Metalworkers of South Africa (NUMSA) complained in a statement yesterday.

The union has further added that this is not the only mine of Harmony Gold where such violations have been reported. Last month, NUMSA members in another one of the company’s mines called Target, located around 270km to the southwest of Johannesburg, had also complained about violations of Health and Safety regulations.

Insisting that the “workers cannot be punished for the poor planning of management”, NUMSA demanded that the “that mine management must urgently transport these workers home, and it must ensure that they all receive their salaries for the month of April.”