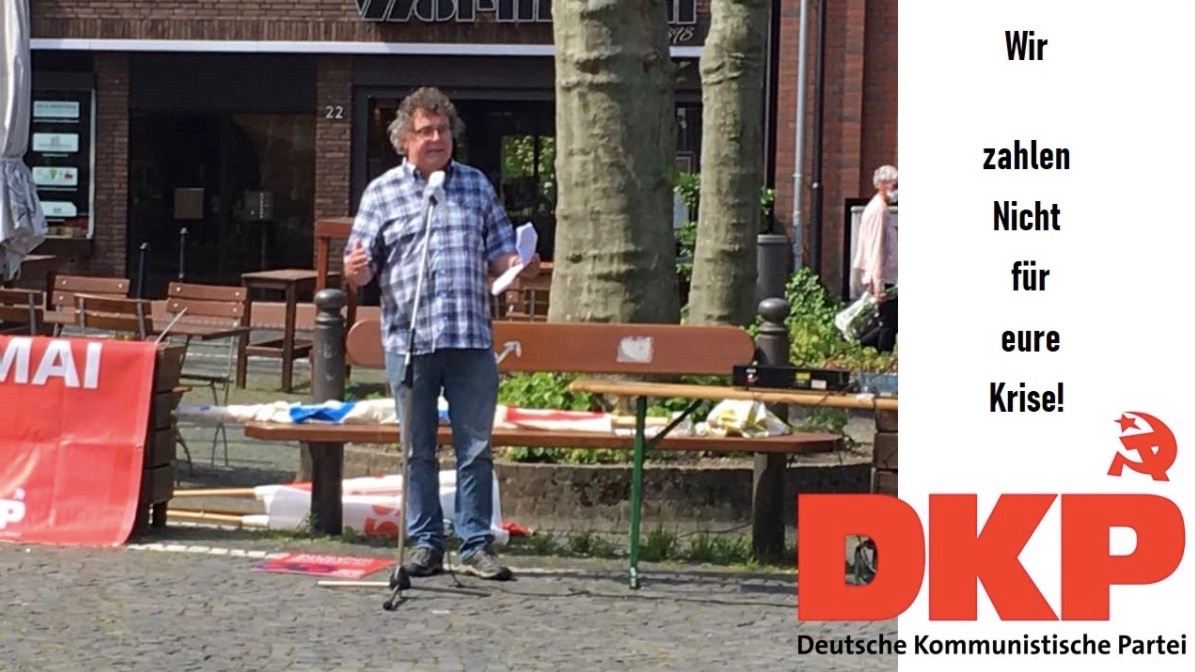 Patrik Köbele addressing the DKP rally in front of the Bottrop town hall on May 9.

The German Communist Party (DKP) proclaimed that the German working class would not pay for the crisis inflicted by the COVID-19 pandemic. They organized a meeting in Ernst-Wilczok-Platz at Bottrop on May 9 where DKP chairman Patrik Köbele addressed the gathering.

The DKP has questioned, “where so much money suddenly comes from as a rescue umbrella for large industries, while the austerity measures in the healthcare sector push workers to the limits of resilience. With prices constantly rising, it is impossible for low-income earners and poor people to make ends meet, let alone to raise money for the necessary protective clothing. While billions are squandered for the rich, there is no money for us.”

“Let the rich pay the bill! Do not allow our fundamental rights such as the right of assembly and freedom of expression to be overridden. Fight with us for solidarity in corona times: we don’t pay for your crisis,” DKP stated.

As of May 25, over 180,595 people have tested positive for COVID-19 in Germany and at least 8,309 people have died. Meanwhile, far-right sections in the country have been organizing racially-tinted “Hygiene demos” and anti-lockdown protests across Germany.

The government has tried to control the rise in death toll through stringent measures including social distancing and lockdown, along with life-saving medical treatments. In such a context, the anti-lockdown protests and calls for re-opening the economy by certain groups have given rise to concerns about the safety of workers. On the other hand, the government has sanctioned lavish handouts for big businesses through COVID-19 stimulus packages, while leaving the working class in peril. The DKP has also criticized Germany-led EU for the lack of solidarity with struggling states and the people of Europe during the crisis.

Köbele had earlier initiated a petition calling on the Bundestag (German federal parliament) and the federal government to lift all sanctions that restrict or hinder the global exchange of medical devices, healthcare equipment, medicinal supplies and scientific information. He has also called for the immediate termination, and not just a “freeze”, of the US war exercise “Defender Europe 2020” to avoid the risk of conflict and check the uncontrolled spread of the COVID-19 pandemic.

On May 9, DKP cadres and various other anti-fascist sections observed the 75th anniversary of the victory over the Nazi forces in Germany that brought an end to the second world war. Tributes were also paid to veterans and the fallen heroes of the anti-nazi war.

Peoples Dispatch (PD) spoke to Chairman of the German Communist Party (DKP) Patrik Köbele earlier regarding the state of affairs in the country, the disenchantment of the working class with the government and the rise of the far-right.

(The original text of the interview in German has been translated to English by Dr. Reuben Mathew, NIT, Calicut, Kerala)

Patrik Köbele: First, I have to make a correction. We have in Germany a government of the coalition of the CDU and the Social Democratic Party of Germany (SPD). It is a government in the interest of monopoly capital. It supports the attacks against the social rights of the workers, women and the youth. It is, however, in the comfortable situation of possessing financial means due to the special position of Germany in the EU. Imperialist extra-profits are generated here. These also allow considerations towards small parts of the working class, which thereby become agreeable towards the ruling class. These parts of the working class are however important for influencing public opinion in the trade unions. This leads to a weakening of the unionized resistance towards the politics of this government. It also causes an integration of large parts of the working-class movement into the imperialist politics of this government.

PD: What are the major reasons behind the rise of the far-right in Germany?  How are ultra-nationalist parties like Alternative for Germany (AfD) able to become popular and strong in German provinces, including in Saxony?

PK: The impression is being created that Merkel’s government has set in motion an almost humane refugee policy. We don’t view it as such. The taking in of large numbers of refugees in the past years was done to increase the number of workers and to increase the competition between the exploited. This results in fear from the perspective of many people, which is justified. In combination with the reactionary measures of the overhaul of the state, and the weakness of the left (also the communist party), this fear leads not to resistance against monopoly capitalism, but in several instances to racism and nationalism. All this is the foundation for the growth of the party ‘Alternative for Germany’ (AFD), which is a racist and nationalist party. A large part of the cadre of this party is recruited from the ranks of the CDU, others come from fascist organizations. But their voters include sections within the working class.

PD: What is the opinion among the general public regarding socialist rule in the erstwhile German Democratic Republic? Is there any significant disproportionality that exists now in the socio-economic development in the east and west regions of Germany?

PK: Yes, there exist huge social and economic differences between the east and west of Germany even 30 years after the counter-revolution in the GDR and its annexation. The east, which means the erstwhile GDR, was almost completely de-industrialized. There was a destruction of the means of production on a war-scale. This has led to millions of people leaving East Germany, and the people living there today are by and large of advanced age and consist of people who are not part of the productive process anymore.

At the same time, the life’s work of millions of erstwhile citizens of the GDR has been trivialized through intensive anti-communist propaganda. But the ruling class has not succeeded in completely anchoring the delegitimization of the GDR in the minds of the people, even after trying for 30 years. This also is more true of the East, than of the West. So even the ruling class has to admit that Germany is still divided.

PD: How does the current German society cherish the memories of the German revolution of 1918-19, the Soviet victory over the Nazis, and leaders like Rosa Luxemburg, Karl Liebknecht, Ernst Thalmann, among others?

PK: It is never mentioned that soldiers and workers wanted a socialist revolution to do away with the causes of wars, and therefore became the driving force behind the November revolution. The events are reduced to the birth date of the bourgeoisie democracy of the so-called “Weimar Republic”. It is not mentioned that this victory over the revolutionary workers and soldiers has caused the deaths of many. It is also not mentioned that the government led by social democrat Ebert had reached out to the old militarized forces for this purpose, and thereby, has at least allowed the murder of Rosa Luxemburg and Karl Liebknecht, maybe even ordered it.

Ernst Thälmann has been defamed as a Stalinist and a puppet of Moscow. This is also because people should be made to forget the role which the Soviet Union and the Red Army played in liberating Germany and Europe from Hitler’s fascism. The scandalous decision of the EU-Parliament declares the Soviet Union to be also responsible for fascism and the war. We could say that the ruling class and the media in Germany and the EU are radically rewriting history.

PD: What is the DKPs take on the European Union and NATO expansionism in the region?

PK: We say that the expansion of NATO to the east is part of the politics surrounding the Russian Federation and China. This is led by the leading imperialists – the USA, Germany, France and England, and the EU. Our view is that this is the chief danger to peace, and that it is already leading to wars (for example, in Syria and Ukraine). NATO is a military alliance. For our country, we demand that we leave NATO, and we demand that NATO should leave Germany. We say that we need peace with Russia and China. We believe that the EU is an imperial construct and that we should transcend it. We reject the expansion of NATO and the EU.

PD: Please mention some of the major initiatives and campaigns by the DKP towards the advancement of working-class rights in the country? In your opinion what is the precise role of the DKP and its mass organization in the current political situation in Germany?

PK: We are, as we have said, a small party. We have nevertheless played a big role in the peace campaign which was directed against a NATO project to increase military spending to 2% of the GDP. That would have meant almost a doubling of the military expenditure for Germany. As regards the working-class movements, we have played a role in the struggles surrounding the healthcare industry, and have demanded more personnel. We have too few members in the industry, though. Therefore we give great importance to the struggle to strengthen our party, and to find more support among the working classes.

In order to tackle the crisis inflicted on the poorer sections due to COVID-19, DKP has also made a set of demands to the government.