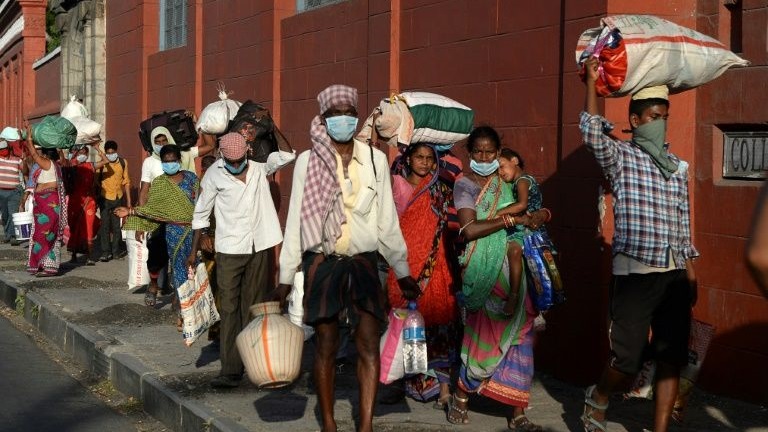 The countrywide lockdown in India, which is part of COVID-19 containment measures, has led to the mass migration of hundreds of thousands from cities and exposed the government’s inability to help them in their time of need. A recent survey has shown that domestic workers, most of whom are women, have been especially affected by the lockdown.

A survey by the Domestic Workers Sector Skill Council (DWSSC) says that nearly 85% of domestic workers have not been paid in the month of April. An eight-state random survey by the DWSSC, a non-profit organization under the Ministry of Skill Development and Entrepreneurship, found that 23.5% of domestic workers have migrated back to their home towns. The lockdown in India was imposed on the night of March 24 and continues, albeit with fewer restrictions.

38% of the domestic workers surveyed said that they were facing problems in arranging food. Around 30% have no money to survive the lockdown period. However, 98.5% of domestic workers are aware of the precautions that should be taken to be safe from COVID-19.

The survey was carried out across eight States – Delhi, Maharashtra, Madhya Pradesh, Assam, West Bengal, Bihar, Jharkhand and Tamil Nadu – in April. Domestic workers continue to be in distress as they are unable to get back to work and access wages.

Across India, only 14 states have notified minimum wages for the domestic workers. “In these states, the workers can file a complaint seeking redressal but in the rest of the States, including in the national capital, they do not have any such recourse. Hence, there is a need for uniformity,” said Ramendra Kumar, president of Delhi Gharelu Kaamgar Sangathan (Domestic worker’s Association).

The report further stated that in many affluent communities, domestic workers face discrimination. They are treated as carriers of the virus.

Geeta Menon, founder of Stree Jagruthi Samiti, who also helped form the Domestic Workers Rights Union Karnataka, pointed to a recent ad by a water purifier brand. The ad asks, “Are you allowing your maid to knead atta dough (flour) by hand? Her hands may be infected.” Many employers think this way, said Geeta.

“Over 80% of domestic workers have been told not to come to work for the next two months (June and July) because their employers fear that they are carriers of the virus. Shutting themselves inside a room when the domestic worker comes to work – all this is insensitive and stigmatizing,” Geeta added.

Around 50% of the domestic workers in the city of Bengaluru have not received their pay for the month of April while many have been laid off by employers, Geeta said.

A 30-year-old domestic worker, Prema, talked about how she was treated by her employer. “My employer said that the place where I live is not hygienic and that they are scared of getting infected. Now, I have found a job at a bachelor’s house. They are going to pay me Rs 1,500 (USD 20 approximately) per month. Earlier, I used to earn twice as much and my starting salary was Rs 3,500 (around USD 46.5) per house. I don’t know what else I can do,” Prema said.

Faye DSouza, an eminent journalist, said: “I hope they realize it was “foreign return” madams and sirs who gave the virus to domestic workers… and not the other way around!”