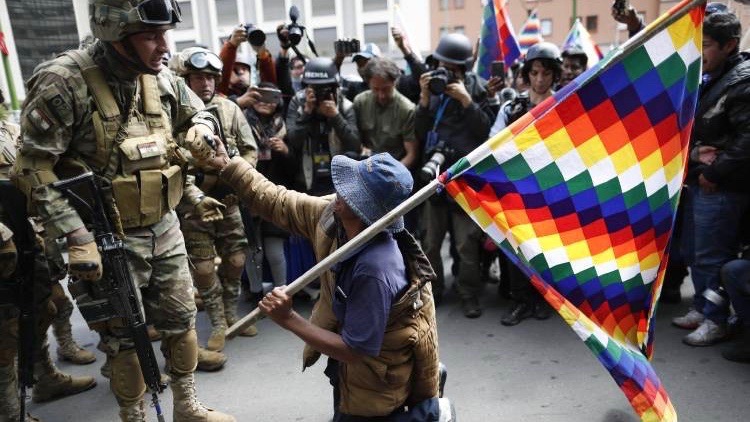 A protester holds the Wiphala, the Indigenous flag that is an official symbol of the Plurinational State of Bolivia, and the National flag of Bolivia, in an anti-coup mobilization on November 15. Photo: AP

Bolivia’s de-facto president Jeanine Áñez, on the night of June 21, enacted the law that calls to hold general elections on September 6. While addressing the citizens on national television, Áñez made the announcement that she was passing the bill.

During the day, Áñez held a meeting with the president of Bolivia’s Supreme Electoral Court (TSE), Salvador Romero, to analyze the feasibility of holding the elections in September. Her announcements came hours after the same meeting.

The decision was celebrated by citizens, social movements and trade unions, who have been mobilizing against Áñez’s mishandling of the health and economic emergencies caused by the pandemic since May 11.

Former president Evo Morales also welcomed the announcement. “With a date fixed, it is now up to the State authorities to guarantee clean and transparent elections, preserving health and the right to participation without political persecutions. Let the people democratically define the destiny of our beloved Bolivia,” tweeted Morales.

The country’s general elections had been initially scheduled for May 3, but were postponed due the coronavirus outbreak. On April 30, the president of the Plurinational Legislative Assembly of Bolivia, Eva Copa, promulgated a electoral law to hold elections between May 3 and August 2, using her special constitutional powers after Añez rejected it.

However, on June 2, the TSE reached an agreement with all political parties and presidential candidates to further postpone the date and hold elections on September 6 due to the public health emergency. On June 9, both the chambers of Deputies and the Senate approved the bill setting September 6 as the new date. But Áñez had resisted passing the bill.

Given her refusal to enact the law, last week, on June 17, the president of Bolivian parliament, Eva Copa, reminded Añez that her sole mandate is to preside over the new elections. Copa warned that “if the law that was sent to her was not promulgated, it would only be bringing the elections forward to August 2, as established by law passed on April 30.”

Áñez seized power in November 2019 after the civic-military coup against socialist president Morales and the democratically elected government of the Movement Towards Socialism (MAS). She has been strongly criticized for using the novel coronavirus as a pretext to consolidate her power and pursue her imperialist and neoliberal policies.

In her public address, Áñez blamed the opposition leaders for pressurizing her to call for elections amid the pandemic and denied that her intentions were to remain in power. She said she was postponing the elections “to avoid risks to people’s health.”

However, the claims of the coup-born president concerning people’s life, are in contrast with the characteristics of her regime. Her rule has been denounced by national and international human rights organizations and institutions for committing grave human rights violations, militarization of territories, brutal police repression against civilians, racist, patriarchal and selective persecution of political and social leaders and their families, disregard for democracy and media censorship.

Over 6.9 million Bolivians are eligible to vote and elect the country’s next president and vice-president as well as 36 senators and 130 members of parliament for the period of 2020-2025.

According to the opinion polls on voters intention, carried out in the first quarter of the year, Luis Arce and his running mate David Choquehuanca of the MAS party were the preferred candidates in the general elections.