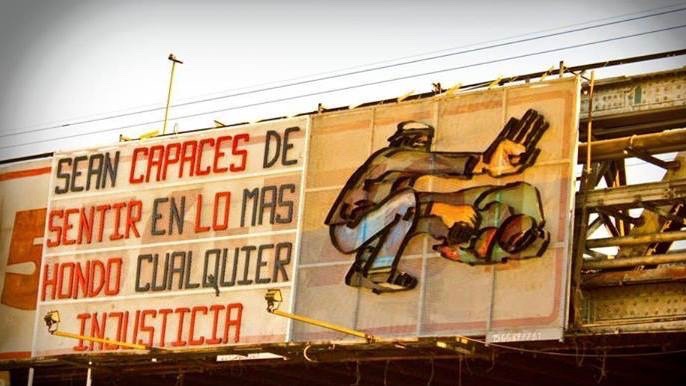 Popular art installation at the Darío and Maxi station in Buenos Aires, "Be capable of feeling any injustice deeply."

On December 19 and 20, 2001, the revolts across the country, including in Cutral Có, Tartagal and Mosconi, unleashed a series of mobilizations wherein the working-class of Argentina brought an end to the government of Fernando De La Rúa.

Six months after these historic mobilizations, as the economic and social crisis, unemployment, and poverty continued, neighborhood assemblies and cacerolazos were being held across the country.

The crisis of neoliberalism had led to deindustrialization, unemployment and poverty. The level of unemployment reached 22.5% and the shutting down of factories was commonplace. The ‘corralito’ measure was in place which restricted the free circulation of cash in checking accounts and savings accounts. The measure drove many people who kept their savings in the banks to take to the streets.

On June 26, 2002, piquetera organizations organized a day of protest and mobilization to demand salary increases, subsidies for unemployed, and food for community kitchens.

The forces of the establishment began their repression of the mobilizations on the Puerreydon Bridge and continued all the way to the Avellaneda City, which was under siege for more than four hours.

Close to the Avellaneda Station, the Buenos Aires police assassinated 21-year-old Maximiliano Kosteki and 25-year-old Darío Santillán, who were militants of the Aníbal Verón Coordinator.

Due to an organized militant effort and dedicated efforts to ensure the issue was not buried, in 2006, the former police commissioner Alfredo Fanchiotti and former Corporal Alejandro Acosta were condemned and sentenced to perpetual prison. Félix Vega, Carlos Quevedo and Héctor De la Fuente, three agents of the Buenos Aires police, were convicted of covering up a crime and awarded a four-year prison sentence.

The undying legacy of Maxi and Darío

18 years after the Avellaneda Massacre, the memory of the piqueteros who were assassinated remains as alive as their ideals. Maxi and Darío are present. Their faces, their names, their slogans are crystallized in paintings, on ceramics, on flags, in graffiti, on t-shirts, on posters, in murals, in sculptures. Their ideals prevail in the dignity of the Argentinian people that struggle for a more just and equal society.

The legacy of Darío and Maxi is alive every time a Roca train that arrives at its destination announces, “You are at the Darío Santillán and Maximiliano Kosteki station.” The station was formerly called Avellaneda and was renamed due to sustained efforts by militants.

Maxi and Darío are a multiplying example of building people’s power, with the horizon of social and national liberation, that deeply has transformed the economic, political and cultural structures of domination in Argentina.

Today the militancy of Maxi and Darío, of the organizations of the unemployed, of struggling every day to better the conditions of people trampled by the system, before called “unoccupied workers” (unemployed), today has transformed into the struggle of the workers of the popular economy, organized in the Union of Workers of the Popular Economy.

Maxi and Darío represent the path to build a new political and social force, that is based on building people’s power and dignity for all of the working-class.

This year, like every year, family members, social, political and human rights organizations will organize activities to continue demanding justice for Maxi and Darío.