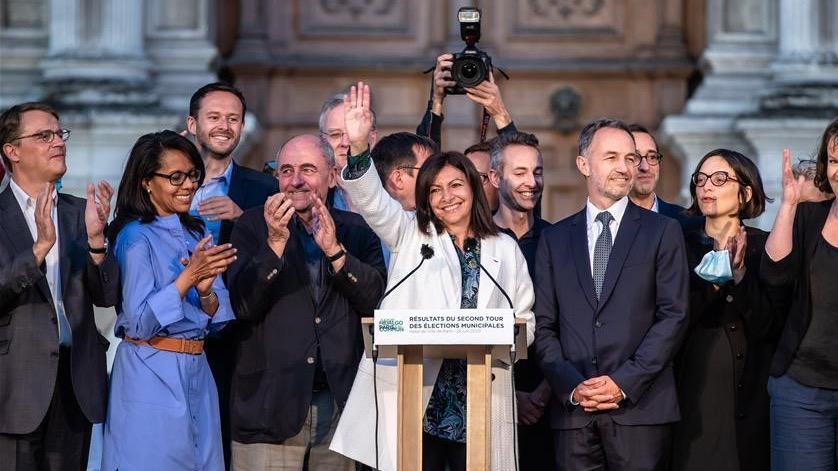 The ruling centre-right Republic on the Move (LREM) failed to make a breakthrough in the final round of France’s local body elections held on June 28, Sunday. According to the latest trends, the Europe Ecology-The Greens (EELV) party may win most of the major cities. As per the results declared so far, the EELV has already claimed victory in eight major cities, including Lyon, Strasburg and Bordeaux.

The elections were held in over 4,827 cities and towns across France. In capital Paris, incumbent mayor Anne Hidalgo from the Socialist Party won her second term after defeating Agnes Buzyn from president Emmanuel Macron’s LREM party, who came in third.

Formed by president Emanuel Macron in 2016, LREM was contesting local body elections for the first time.

In Marseille, France’s second largest city,  EELV candidate Michele Rubirola is leading with over 10% votes against her conservative party rival.

According to the exit polls, LREM may not win in any major city. However, prime minister Eduardo Philippe won the mayoral elections in Le Havre, a port city in the north.

The Far right and anti-immigrant National Rally, headed by Marine Le Pen, won the mayor’s post in the southern city of Perpignan after its candidate, Louis Aliot, defeated the incumbent conservative party mayor. It is the first time that National Rally has won in a city with more than 100,000 inhabitants.

The first round of the vote was held on March 15. The voter turnout then was also low, with just close to 39% coming out to vote. The final round was originally scheduled on March 22. However, it was postponed due to COVID-19 related lockdowns. France has been one of the worst-affected countries in Europe, with over 163,000 infections and close to 30,000 deaths.