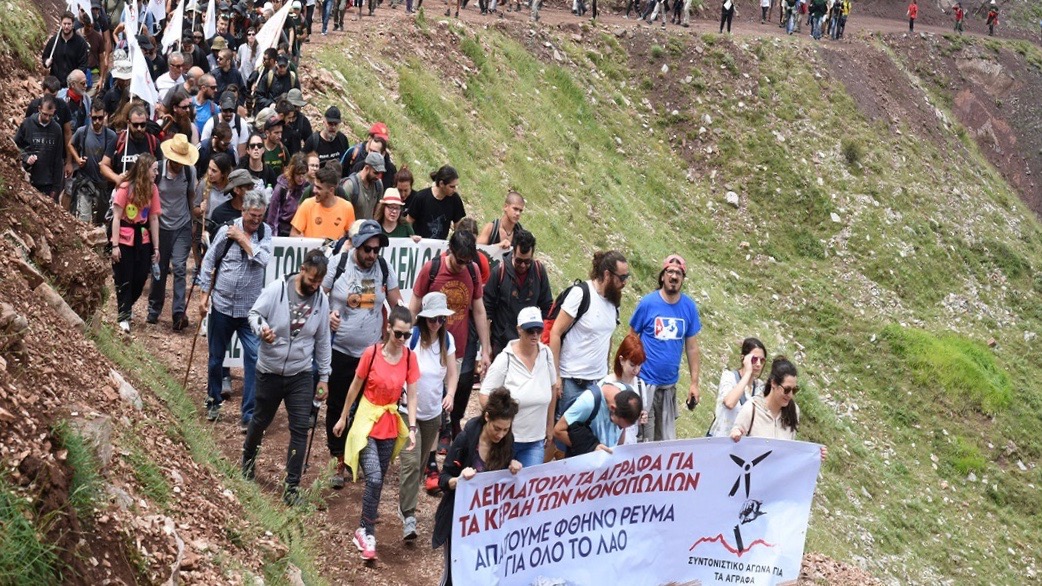 Hundreds hiked to the Monument of Niala in Agrafa as part of a protest on July 5, Sunday. (Photo: 902.gr).

Protests have intensified in Greece against plans to hand over the Agrafa mountain peaks to business interests for the development of wind farms. On July 5, Sunday, hundreds of people, under the leadership of the Struggle Committee for Agrafa, organized a hike from Ag. Nikolaou to the Monument of Niala to protest the proposal for the installation of 650 wind turbines in the Agrafa region, a mountainous terrain located in the Evrytania and Karditsa regional units of mainland Greece.

The Agrafa mountains are home to several places of historical and environmental importance. The Agrafa struggle committee believes that the wind farm project is likely to inflict significant damage on the landscape and terrain. Wind farms also require the construction of a wide network of roads and other infrastructure. The Greek government had approved the project earlier under the guise of promoting energy production in the renewable energy sector.

The struggle committee said in their statement, “it is time to escalate our struggle with various corresponding initiatives and mobilizations. To get the message of our opposition to the surrender of natural wealth, land, and energy to big business in every corner and to every worker. Now is the time to convince even more workers that profits for business groups and cheap electricity for the people are incompatible.”

The Evritania Committee of the Communist Party of Greece (KKE) also expressed solidarity with the protests. Earlier, Member of European Parliament (MEP) from the KKE, Konstantinos Papadakis, had raised this issue in the European parliament.