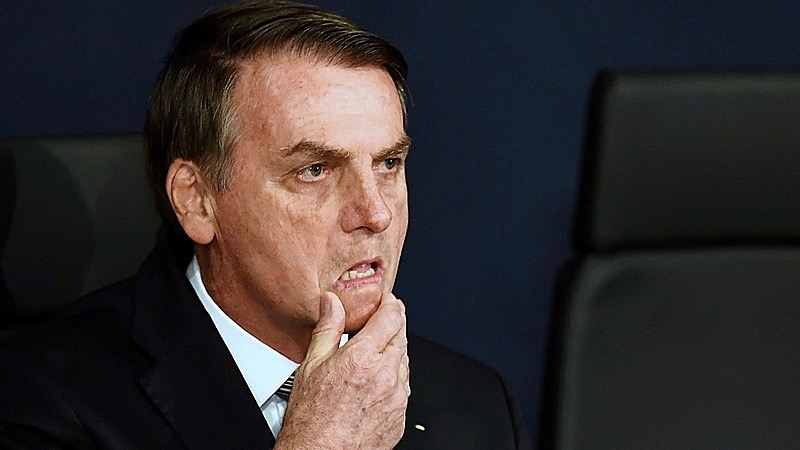 According to these organizations, since the beginning of his term Bolsonaro has “gravely and systematically infringed upon the Constitution of the Republic - Evaristo Sa / AFP

Social movements filed in Congress an impeachment request against President Jair Bolsonaro, on Tuesday, July 14th. In the document, these entities put forth an array of possible crimes committed by the former army captain.

According to these organizations, since the beginning of his term Bolsonaro has “gravely and systematically infringed upon the Constitution of the Republic. By adopting this standard of constant disrespect towards the constitutional directive, the head of State seems to be pushing for the normalization and acceptance of these violations.”

Furthermore, these organizations allege that by committing these crimes, the president is trying to destroy a democratic process that began in 1988, with the creation of the current Federal Constitution.

According to these movements, this ends up “bringing about serious human rights violations and threatening lives, healthcare, the physical well-being and food security of millions of Brazilians.”

It is possible to attribute the crime of administrative malpractice to Bolsonaro, since the government’s actions go against “the guiding principles of public office,” as explained in the 37th article of the Constitution.

On this issue, the social movements describe in detail some of the actions taken by Bolsonaro that are not aligned with these guiding principles. For example, he has made declarations in favor of violence and military dictatorship, like “his perverse complaint that the Brazilian cavalry hadn’t been as efficient as the American one, when it came to exterminating the native populations; his affirmation that some women did not deserve to be raped because they are too ugly; his proclamation that he would rather see his son die than be a homosexual; his statement saying that the sickest and most infamous torturer of the Brazilian military dictatorship, Carlos Alberto Ustra, is a hero who should be honored.”

Still on this issue, the social movements cite attacks by Bolsonaro against the press, the National Congress and the Supreme Court (STF) as well as his participation in anti-democracy rallies that were calling for the closure of these institutions.

They also highlight the government’s inability to manage the COVID-19 pandemic, which becomes evident when considering there is no national plan in place to combat the disease. Further evidence comes from the fact that the president has made statements minimizing the illness, while at the same time, displaying negligent and belligerent behavior toward native populations.

The social movements say the accused has established a “process to undo the key environmental defense mechanisms, and given incentive to an unprecedented destruction of Brazilian ecological heritage,” which was evidenced by the fact that right at the outset, this government government fired 21 of the 27 regional superintendents of the Brazilian Institute of Renewable Resources and the Environment (Ibama). This “inevitably implied the end of environmental policies being undertaken till that point.”

Also mentioned in the complaint against the president is the sped up approval of the use of pesticides under the Bolsonaro government. The Ministry of Agriculture approved a record number of these chemicals : 503 new ones in total, a 12% increase from last year.

Violations in the realm of culture

In August 2019, Bolsonaro openly criticized public funding for cultural productions about the LGBTQ lifestyle, a violation that threatened the very existence of the National Cinema Agency (Ancine), in case funds for this type of projects actually ended up being suspended.

Amid this mess, Bolsonaro sacked the then Cultural Secretary, Henrique Medeiros Pires, who after leaving the government accused it of censorship: “It’s clear to me that this has a name: censorship. If I stay silent in my post, I will be consenting to censorship. I will not applaud this type of thing. I am unemployed now. I prefer that to applauding censorship.”

Violating the rights of the Black and “quilombola’ population

The promoters of the impeachment request claim that Bolsonaro engages in criminal practices when he makes statements and policies that promote discrimination. They allege that these have had an “impact in society, generating a noticeable rise in hate speech, as well as nationalistic ideologies and racial superiority narratives that incite violence against Afro-descendant people.”

Among the examples of this, the movements mention that in 2017, in an event in São Paulo, the president referred to “quilombolas” (residents of farming communes founded by former slaves) using animal terminology, equating them to beasts. In that same year, the current head of State said in an interview to RedeTV television that, “this racism thing in Brazil is rare. All the time they are pitting black men versus white men, homos against heteros, forgive my language, but I’ve had it up to here with this subject.”

Another example that represents all these statements was the naming of Sérgio Nascimento Camargo to head the Palmares Cultural Foundation, which works to preserve Afro-Brazilian culture and provide education and job training to black Brazilians. Sérgio Camargo has publicly stated that slavery was helpful to Afro-descendants.

Camargo’s “criminal” actions while president of the Foundation was laid bare by the removal of the biographies of black leaders from their website. At the time he claimed that when he took over, he determined “the removal from the list of personalities like Benedita da Silva and Marielle Franco, symbols of the crying left (…) Such black figures have no merit nor nobility, thus will not be honored during my administration.”

Violating the rights of indigenous populations

With a law he signed in 2018, Bolsonaro transferred the duties of identifying, delineating and registering lands traditionally occupied by indigenous peoples, from the Foundation of Native People, to the Ministry of Agriculture and Cattle Ranching, headed by land owner Teresa Cristina, “whose family has a long history of conflicts over land with local native tribes in the state of Mato Grosso do Sul.”

The social movements say it is “clearly a flagrant redistribution of purpose to enact such a transfer of power, to let the agricultural elite decide who gets to keep what land. You don’t need too much intellect to realize that he is favoring the land owners over indigenous communities,” they affirm.

This type of action is clearly a violation of impartiality laws according to article 37 of the Federal Constitution.

Violating the individual and collective rights of workers

With regards to how Bolsonaro has violated the individual and collective rights of workers, the organizations behind the impeachment request identified declarations made by the far-right leader as well as policies he implemented. Among them, is the president’s complaint about the existence of Labor Courts: “Which country in the world has a Labor Tribunal. It has to be sorted out in the regular courts. If the mood is right we can discuss this project and move forward with it.” On the same token, the social movements mention the 2019 law known as the Economic Freedom Law, which created mechanisms that according to researchers make oversight more difficult, and create barriers to oversight practices.”

They conclude that these “extreme neo-liberal policies, besides from deconstructing the people’s access to Justice (…) Have brought about a new and corrosive element into the labor law equation: the dismantling and implosion of the institutions responsible for overseeing working conditions, promoting and assuring the implementation of labor laws.”