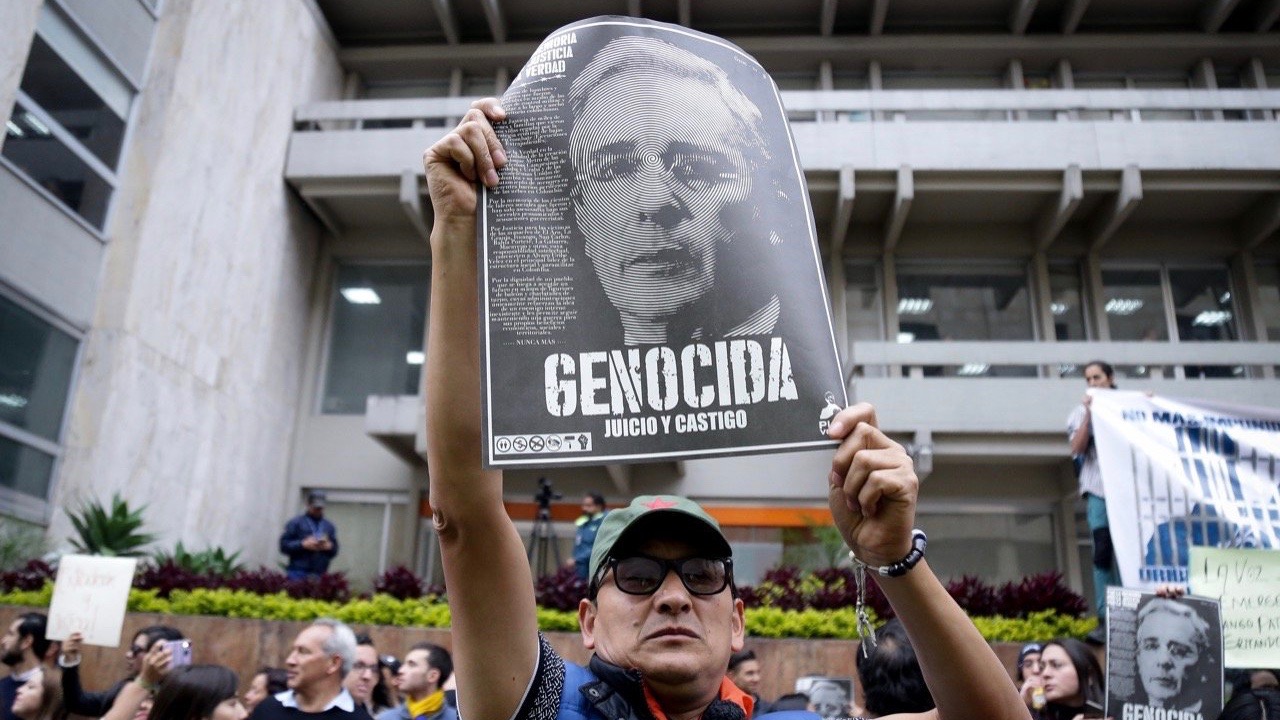 On October 8, 2019, ex-president Álvaro Uribe appeared before the Supreme Court to testify in the case. Members of social movements and human rights organizations rallied outside. Photo: Colombia Informa

The Colombian Supreme Court court on August 5, Tuesday, ordered the detention of former president Álvaro Uribe Vélez in a case related to witness manipulation and fraud. Uribe will remain under house arrest for the remainder of the judicial process.

Throughout the four decades of his political career, Álvaro Uribe Vélez has acted as if his criminal actions could have no consequences. For the most part, he was not wrong. Despite being implicated in over 270 legal cases involving counts of corruption, bribery, human rights violations, drug trafficking, money laundering, and other grave offenses, Uribe has largely enjoyed complete immunity from any  punishments. That was until Tuesday.

Uribe responded to the decision in a post on Twitter stating, “The deprivation of my liberty causes me profound sadness, for my wife, my family and the Colombians that still believe that I have done something good for the homeland.” Uribe’s defense team said it would appeal the order.

Several hours after the decision, Colombian President Iván Duque, posted an emotional video on Twitter condemning the decision made by the Supreme Court and declaring that he has always believed in Uribe’s innocence. Duque was a largely unknown politician from Uribe’s Democratic Center Party but was groomed by Uribe himself to be the right’s candidate in the 2018 elections.

What is Uribe accused of?

In 2018, Colombia’s Supreme Court launched an investigation into the former president for witness manipulation and procedural fraud related to his alleged illegal interference in another probe initiated by left-wing senator Iván Cepeda in 2012. Cepeda had denounced that Uribe had links to paramilitary structures in the country. He specifically accused Uribe and his brother Santiago of having participated in the formation of the Metro Block of the United Self-Defense Forces of Colombia (AUC), a paramilitary group active in Antioquia.

In response, Uribe accused Cepeda of having bribed former paramilitary personnel to testify against him, but Inspector General Alejandro Ordóñez investigated him and found no evidence. In 2018, the case against Cepeda was closed and the court announced that it would instead investigate Uribe.

There is overwhelming evidence to suggest that Uribe is guilty. There are 42 witnesses, among whom are convicted paramilitary personnel, who have admitted to being contacted by Uribe’s lawyer Diego Cadena so that they would retract their testimonies in Cepeda’s case against Uribe.

One of the key witnesses is Juan Guillermo Monsalve who is currently being held in special custody in La Picota prison in Bogotá. He was convicted of extortion, kidnapping and conspiracy to commit a crime, and the Attorney General has confirmed that he was part of the Metro Block of the AUC in Medellín. Monsalve was interviewed by Cepeda in 2011 to help build the case against Uribe but was later contacted by Diego Cadena to retract the testimony and in exchange, he offered his services as a lawyer. Their whole conversation was recorded.

Colombia’s movements have hailed the order. The social movements of the country have long pointed to Uribe as the personification of the impunity enjoyed by those in power who engage in criminal activities. Uribe was popular among certain sections in Colombia but of late, this has been on the decline. Journalist and lawyer Daniel Mendoza Leal created an online series called “Matarife” which investigates different aspects of Uribe’s criminal connections and empire. The series has been a huge hit, pointing to a more critical evaluation of Uribe.

War crimes are being committed in Yemen, says report