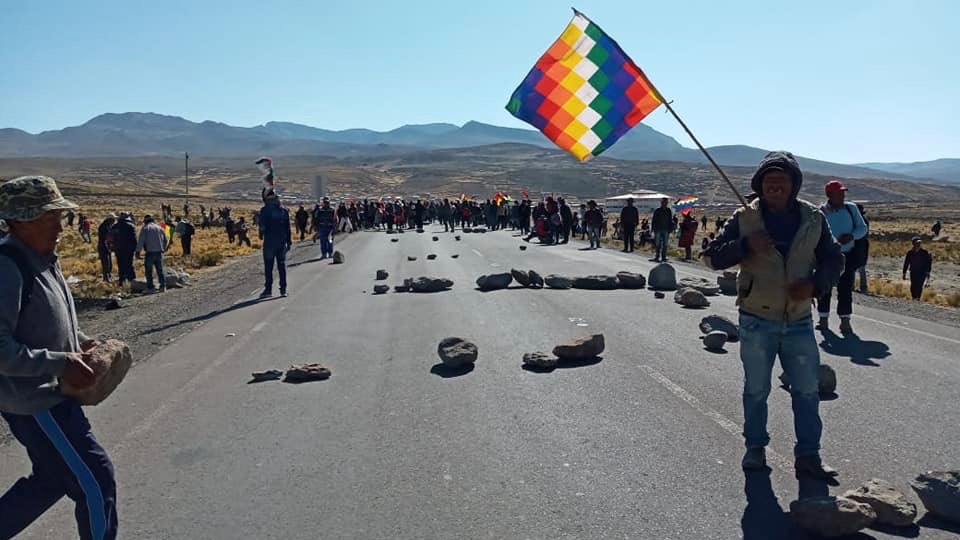 On August 6, for the fourth consecutive day, tens of thousands took to the streets across Bolivia in rejection of the postponement of general elections in the country. The national strike and nationwide road blockades, called for by the Bolivian trade union center, the Central Obrera Boliviana (COB), expanded to various other sectors and parts of the country.

Social movements and trade unions, such as the Indigenous Peasant Workers Federation, Ponchos Rojos, stressed that their demand is no longer just democratic elections, but also the immediate resignation of the entire coup-born regime led by Jeanine Áñez. They denounced the coup regime for the near collapse of the country’s healthcare system and rejected its decision to cancel the 2020 school academic year.

Since August 3, more than 75 interdepartmental and interprovincial roads and highways as well as interior streets of major cities have been blocked with stones and rubble to pressurize the coup-installed government to reverse its decision to suspend the elections. The protesters are only allowing the ambulances and vehicles transporting medical supplies to pass through the points that are blocked.

The fourth day of general strike coincided with Bolivia’s National Day. On August 6, 1825, Bolivia signed its Declaration of Independence and officially became a sovereign nation. In 1825, the people defeated Spanish colonialism, under the leadership of Liberator Simón Bolívar. 195 years later, Bolivians are fighting a new battle against imperialism, for democracy and national sovereignty, and in defense of the country’s natural resources.

On Bolivia’s National Day, the COB leaders called on protesters and members of social movements to sing the national anthem at noon at all the road blockades throughout the country to demand that the elections be held on the originally agreed date, September 6 and not on the unilaterally rescheduled date, October 18. They also asked people to observe one minute of silence for those killed in the Senkata and Sacaba massacres, as well as for the victims of the COVID-19 pandemic. They called on people to light candles and bang utensils at 7 pm to express their dissatisfaction and rejection of the de-facto government.

Bolivians marched today against the US-backed regime, past the Huayllani bridge, Sacaba, where the regime massacred anti-coup protesters on November 15th 2019. pic.twitter.com/pIbcSKIsiZ

The Bolivian community in the US also marched in Washington DC in solidarity with social movements who are fighting for the restoration of democracy in Bolivia.

On the night of August 5, the COB announced that the dialogue and negotiation process between the trade union and the Supreme Electoral Court (TSE) had ended without any agreement. Therefore, the trade union center announced to continue the measures of protest indefinitely, which they began on August 3.

On August 4, Arturo Murillo, the interior minister of the de-facto government, in a press conference threatened to use force against protesters if road blockades are not lifted. Following Murillo’s announcement, the pro-democracy protests received violent threats by right-wing extremist and fascist groups.

On August 5, a far-right terror group of Santa Cruz, Unión Juvenil Cruceñista (UJC), released a video in which they threatened to attack the protests demanding elections. The racist group was involved in the civic-military coup against former president Evo Morales in November 2019 and has Áñez’s support. Another Bolivian fascist criminal group, Resistencia Juvenil Cochala, warned the trade union that their gang is ready to attack protesters and has ’60 motorbikes’ ready to be mobilized.

Áñez’s government, which usurped power following the civic-military coup against democratically elected president Evo Morales and the constitutional government of the Movement Towards Socialism (MAS), has postponed the general elections three times since March this year, citing the health risk due to the coronavirus pandemic.

With reports from Kawsachun News