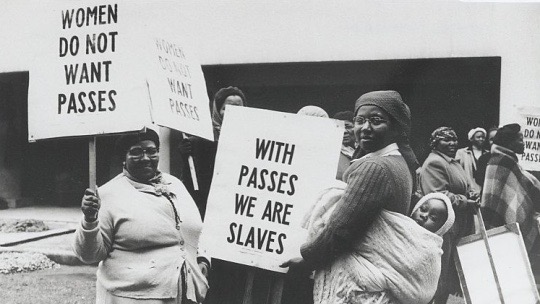 August 9 is celebrated as National Women’s Day in South Africa. It marks a massive march on that day in 1956 by tens of thousands of women who were protesting against apartheid-era pass laws. The day is all the more significant this year as between February and April, two million of the three million people who lost their jobs were women. Why do women experience this disproportionate economic violence and what is its source?

In South Africa, colonialism and later apartheid were built through the capitalist accumulation of wealth and economic resources owned by a white minority. The laboring majority was evicted from the productive lands, restricted to overcrowded, underdeveloped locations and could only find the means to subsist by seeking out wage-slavery. The bodies and movement of the African majority needed to be vigilantly organized and aggressively controlled in order to sustain the accumulation of wealth by the white minority. Severe consequences were meted out to those found moving without their dompas (‘domestic passport’ translated from Afrikaans as ‘stupid pass’, due to the absurdity of carrying a pass for internal movement in one’s country of citizenship). This is the history of oppression and exploitation of the black working masses from which the modern capitalist state in South Africa arises.

The apartheid system dismantled the family structure and destroyed livelihoods in the rural areas. By the turn of the twentieth century, the mining industry served as a bedrock of the South African economy. It recruited men, in the main, from the rural hinterlands of colonized parts of Sub Saharan Africa. Women were left to carry the burden of sustaining life in the villages where they looked after children and cared for families. When they entered the urban landscape, it was to satisfy the demand for cheaper labor. As domestic servants, sex workers, cleaners and cooks, women worked in the lowest positions and experienced the highest levels of precarity and violence.

Resistance to this was fierce. Militancy and conviction of working class women could be heard in the popular slogan “Wathint’abafazi, wathint’imbokodo..uzokufa!” (“You strike a woman, you strike a rock… You will be crushed!”) The most decisive action took place on August 9, 1956. An estimated 20 000 women of different races, religions, geographies, sectors and class locations took to the streets of Pretoria. Their target was their common enemy: the racist apartheid regime that profited at their expense. Marching to the notorious Union Buildings, the movement’s strength lay in its mass mobilization and clear understanding of unity as sacrosanct. The plan was for a petition with more than 100 000 signatures to be handed over to the country’s then prime minister, JG Strijdom. The protest was anchored in the defiance of the racist Pass Laws or dompas system that were put in place to contain and exploit their labor. It was one of the largest mobilizations of women in African history and became a key moment in the organizing around a number of issues devastating the working class.

Just two years before the march, in 1954, the Federation of South African Women (FSAW) was formed out of women’s determination to resist oppression and exploitation. This was a broad-based women’s organization founded during a conference of 140 delegates representing 230 000 women from all parts of South Africa. Led by figures such as Ray Simons, Lillian Ngoyi, Amina Cachalia and Helen Joseph, its multi-sectoral character saw the birth of a vibrant organization consisting of teachers, nurses, and trade unionists from clothing, textile, food and canning industries and more.

Key to FSAW’s inception was the adoption of a Women’s Charter. This clearly articulated the political outlook of the contingent of women fighting for genuine emancipation. The Charter sharply raised the demands which would a few years later form an integral part of the entire liberation movement’s quest for total freedom:

A year later, in Soweto, these demands found expression in the Freedom Charter. The movement understood how all social plagues were born from the policy of economic apartheid whose battery of racist laws wreaked havoc on the working class. The women understood they were oppressed as black people, as women and because they were poor. This multidimensional analysis of apartheid reflected that it was imperialism and capitalism that had declared war on their livelihoods and survival as human beings:

“These are evils that need not exist. They exist because the society in which we live is divided into poor and rich, into non-European and European. They exist because there are privileges for the few, discrimination and harsh treatment for the many. We women have stood and will stand shoulder to shoulder with our menfolk in a common struggle against poverty, race and class discrimination, and the evils of the colorbar.”

In October 1955, a demonstration saw 2,000 women across races mobilize in defiance of apartheid legislation and march to the Union Buildings. The common thread throughout all demonstrations was a clear message of peace and unity amongst those protesting, while declaring war on the enemy that was apartheid. Uniting their forces, they identified the enemy with determination and clarity of direction, with unity being sacrosanct to their mobilizing and organizing tactics.

It was against this backdrop of intensive political work that the historic march of August 9, 1956 was held.

The political breakthrough achieved in 1994 had promised to overhaul the apartheid system which made the black working class discriminated against in the land of their birth. For women, the burden has always been manifold due to the classed, racial and gendered character of national oppression. For genuine transformation to happen, the economic foundations of the apartheid structure had to be not only shaken but fundamentally destroyed and replaced with a just and equitable system.

Instead of focusing on the central problem of destroying apartheid’s white supremacist architecture, the capitalist state presided over by a neoliberal government exacerbated the social inequalities in South Africa, between rich and poor, black and white, and men and women. After the bourgeois democratic breakthrough in 1994, the revolutionary process which had gained momentum, particularly in the 1980s, was demobilized. Instead of championing the aspirations of the poor masses, the South African government opted for a neoliberal agenda by bowing to the interests of international finance capital. Quantitative changes have taken place such as increased participation of women in key sectors of society like the executive, legislative and judicial arms of the state. The illusion created by these changes obscures the lack of qualitative shifts. Nonetheless, scrutiny is mounting due to the ever increasing and manifold violence targeted at women.

Reporting on the backwardness of South African workplaces, the 19th Commission for Employment Equity Annual Report (2019) lamented the ultimately slow paced transformation, especially with respect to gender equity. According to this report, “65,5% of high level managers were white and 76,5% were men. The large majority of the country’s unskilled workforce was black.” Compounding this already dire situation for black working class women is the fact that the principle of equal pay for work of equal value still does not apply, as they earn 70% less than what their male counterparts receive.

Findings from a survey conducted through the National Income Dynamics Study (NIDS), which was looking at the socioeconomic impacts of the Covid-19 lockdown, have revealed that “of the approximately 2.9 million net job losses that occurred between February and April this year among all adults aged 18 and older, women accounted for two-thirds”. As soon as the national lockdown was declared in South Africa on March 26, women’s workload grew exponentially in the patriarchal family units as child-care centers and schools closed. The gendered division of labor forced women into a situation where they had to look after the sick, and care for their families with minimal resources. For both working and unemployed women, the lockdown has caused untold suffering that is manifested in the rapid rise in violence against women.

The nature of women’s exploitation lies in the nature of the capitalist system’s reliance on conquest and division. Inequality can only be abolished by abolishing capitalism and all its social and cultural institutions. Taking the lead from the gallant women fighters of the 1950s, the revolutionary task for all people today is to mobilize and organize the working class. As the women of 1956 did, our task is to unify all efforts into a political force that can launch a direct assault on the key tenets of the capitalist and imperialist system.

As revolutionary socialist Samora Machel once said during the struggle against Portuguese colonialism towards national liberation in Mozambique, “The emancipation of women is not an act of charity, the result of a humanitarian or compassionate attitude. The liberation of women is a fundamental necessity for the revolution, the guarantee of its continuity and the precondition for its victory.”