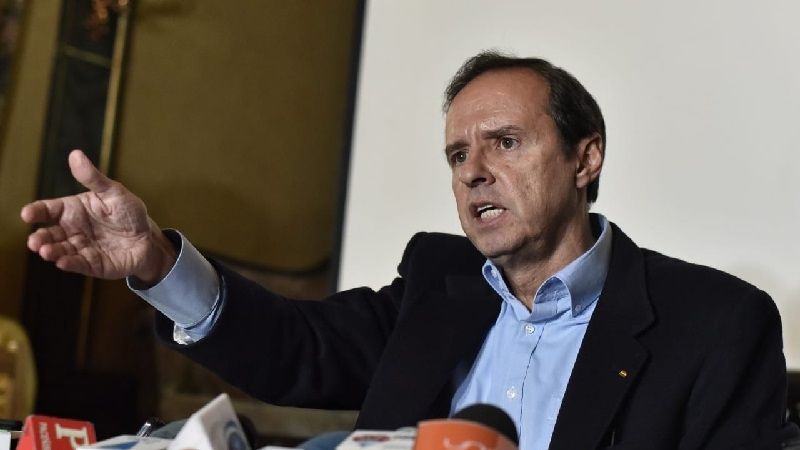 On October 11, former Bolivian president and the presidential candidate of the right-wing Libre 21 party, Jorge Quiroga, announced that he was withdrawing his candidacy from the October 18 general elections. Photo: Página Siete

Former Bolivian president and the presidential candidate of the right-wing Libre 21 party, Jorge Quiroga, on October 11, announced that he was withdrawing his candidacy from the general elections scheduled for October 18. In a message posted on his Facebook and Twitter accounts, Quiroga admitted that he had no prospect of winning and he was leaving the presidential race to prevent the left-wing Movement Towards Socialism (MAS) party from winning the elections in the first round.

“No matter how small the risk of MAS entering the government directly on October 18, I do everything in my power to prevent it,” said Quiroga, who ruled Bolivia for a year between 2001 and 2002. Throughout the election campaign, in all the opinion polls on voting intention, Quiroga had received only 1 to 2% of the votes.

Quiroga is the third presidential candidate who has dropped out of the electoral race in the past one month. Last week, on October 7, the right-wing Nationalist Democratic Action (ADN) party announced its withdrawal from the elections. Earlier, on September 17, the coup appointed interim president, Jeanine Áñez, pulled out from the presidential race to prevent the division of conservative votes against the MAS. Áñez made the decision after learning the result of an opinion poll that placed her in fourth place in the presidential race. All the three parties will still appear on the ballot paper as they made the decision to withdraw from the elections late. However, any vote received by them will be counted as a spoilt vote.

The MAS’ Luis Arce has emerged as the favorite candidate in all the opinion polls published so far. The latest and last opinion poll published yesterday suggested that he was just 0.9% of the votes away from a first round victory. Arce is leading the voting intentions with 42.2% of the votes, followed by Mesa with 33.1% of the votes and Camacho with 16.7% of the votes.

New Bolivia poll shows that the Movement Towards Socialism is just 0.9% away from a first round victory. pic.twitter.com/bKSv2KSdkl

According to the Bolivian constitution, in order to win in the first round, the front-runner has to win more than 50% of the votes or more than 40% of the votes with a 10% lead over the runner-up.

October 11 was the last day of the election campaign and Arce was received by massive crowds in all the three cities he visited.

Former president Evo Morales also reiterated that he is sure that Luis Arce will win the elections with huge popular support and recover the homeland from the economic crisis. “All government, media and business power was activated against the MAS and our candidate Luis Arce to prevent the victory of the people in Sunday’s elections. But, we count on the consciousness of the popular bloc that wins heroic battles,” wrote Morales in a tweet.

This week and the following weeks are crucial for the re-establishment of democracy and stability in Bolivia, especially after what was witnessed post the October 2019 general elections. Last year, when Morales won the elections, Bolivia’s right-wing forces came together and led a violent civic-military against the democratically elected president Morales of the MAS in November 2019, following the falsified allegations of electoral fraud, which were subsequently debunked by researchers from the US.

Paradoxically, Camacho, who was one of the key leaders behind the violent coup against Morales that forced him out of office, could also be crucial for the return of the MAS, by dividing Mesa’s vote and allowing Arce to win in the first round.