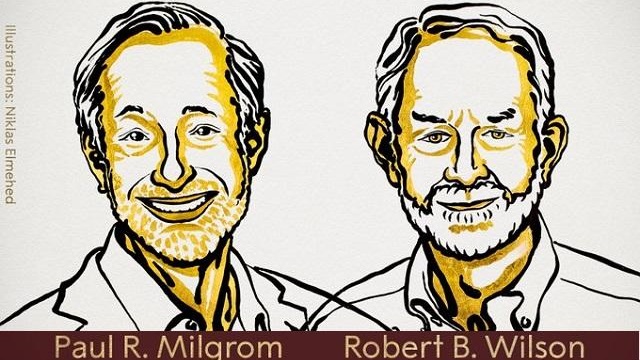 The Sveriges Riksbank Prize in Economic Sciences in Memory of Alfred Nobel (popularly known as the Nobel Prize in Economics) was awarded to the former student–teacher duo of Paul Milgrom and Robert Wilson for their pioneering work in auction theory.

The work done by Milgrom and Wilson has advanced auction theory and they were instrumental in taking auction theory to many applications. To quote the Swedish Academy: “They have also used their insights to design new auction formats for goods and services that are difficult to sell in a traditional way, such as radio frequencies. Their discoveries have benefited sellers, buyers and taxpayers around the world.”

As noted by the Academy, auction theory and different auction formats have been used by governments throughout the world to sell assets ranging from radio spectrum to minerals. “Robert Wilson developed the theory for auctions of objects with a common value – a value which is uncertain beforehand but, in the end, is the same for everyone.”

Milgrom developed bidding strategies in which bidders could learn about each other’s expected value which resulted in higher revenue for the seller. As auctions were embraced by more and more governments for allocating complex objects to different users and use cases, auction theory was developed to incorporate social objectives inter alia revenue maximization.

However, this is not the first time that an economist has been awarded the Nobel Prize for their work on auction theory. In 1996, economist William Vickrey shared a Nobel memorial prize in part for his foundational work on the theory of auctions.

The accolades for auction theory were not limited to the Nobel Prize alone; in 2003, after the British auctions of 2000 which earned the government $34 billion, one of the academic designers of the auction, Professor Kenneth Binmore, was given a commendation from the Queen of England and the title “Commander of the British Empire”.

The success of the auction theory was celebrated in the media as well. New York Times described the 1994 spectrum auction by Federal Communication Commission (FCC) as the “greatest auction ever”. In India as well, the media has applauded the auction design after the 3G auction in 2010 for the high revenue it generated for the government.

So, what explains the adulation received by auction theory within and outside the profession? How do we understand the meteoric rise of this relatively nascent branch of economics? The answer is in the politics that enabled auction theory to be at the center of public policy and the objectives it aimed to achieve.

Auction theory and privatization: A match made in heaven

The emergence and rise of auction theory coincided with the increased influence of the politics of neoliberalism on governments. While the birth of the auction theory and the related areas, such as market design and engineering economics, can be traced back to the socialist calculation debate in 1950s and 60s, auction theory was catapulted into prominence in the 1990s when governments and corporates hired academic economists as consultants for selling and buying assets. For an ideology based on minimum state intervention and reorganizing society on market principles, auction theory was a natural ally.

Auction theory conceptualized market as information processers and this knowledge was majorly used to design and implement markets for assets owned by governments. Auctions, together with bargaining and give away, were methods of privatization, but with the advances in auction theory, it displaced the latter two as the preferred method of privatization, as it allowed for an entirely market-based price discovery. Starting from the early 90s, auction theory became the sine qua non of the privatization drive.

Experts in auction theory were sought after for privatizing government-owned assets and even in instances, such as creation of markets for carbon credits. In other words, auction theory was used in solving two seemingly intractable problems faced by neoliberalism, namely discovering price and eliminating externalities. This was achieved by narrowly defining efficiency in economic terms at the cost of other possibilities. This was exemplified in the words of US vice-president Albert Gore during his speech in the beginning of FCC auction as “putting license into the hands of those who valued them the most”.

The basic assumption of auction theory, when used for the purpose of privatization, is that the highest bidder will serve the public interest by using the goods in the most efficient way. As demonstrated in many cases, including that of India’s telecom industry, auctioning of spectrum to the highest bidder has always not been translated to serving the best interests of the public. A focus on high revenue for government through auctioning spectrum has resulted in stunting the growth of the sector and delaying the rollout of 5G, mounting debt of the sector and the resultant tendency toward monopolization.

While the success and neutrality of auction theory almost became folklore in economics and beyond, the truth was far from this. As economist Edward Nik-Kha notes in the context of FCC auctions of 1994: “Contrary to widespread belief, auction theory failed to promote public policy”.

As auction theorists became consulting engineers for market economy under the auspices of their corporate clients, the development of theory and their proposals to governments were driven more by the business interests of the clients rather than public policy.

This fact is well documented in the case of FCC auction of 1994 in which auction theorists, despite belonging to the same theoretical school, submitted divergent proposals advancing the interests of their clients. These proposals were always couched as efficient and were purportedly in the interest of the public. For example, the auction format proposed by the winners of this year’s Nobel Prize was allied with the business interests of their client, Pacific Bell.

Milgrom and Wilson had proposed a simultaneous multiple ascending auction format, suggesting that this would help bidders to take advantage of information revealed during the auction. Despite this auction format being opposed by most economists during FCC auctions of 1994, it was adopted by the auctioneer (FCC), as it was broadly consistent with the business interests of some big telecom companies, including Pacific Bell. By becoming consultants for corporates and governments, auction theorists were intervening in the economy by designing markets for their clients. This intervention was never politically neutral and was wedded to the ideas of market-based efficiency.

The development of auction theory is inextricably linked to the project of neoliberalism and privatization. The first-hand accounts about auction theory, including that of Paul Milgrom, always begins with an appreciation of how the theory helped governments to sell assets and implement market-based solutions for hitherto unsolved problems.

Auction theory was not just a part of the privatization saga, it helped governments and deep-pocketed corporates to do it in ways that maximized their gains. Further, auction theory helped the process of privatization and market-based solutions to attain scientific status in the public eye. For parties whose economic interests were served by the auction theorists, a public perception of auctions as unmarred by politics helped their cause.

It is a well-known that in its history of 52 years, there has been a lack of racial and gender diversity in awarding the Nobel Prize in economics. That the prize usually ignores heterodox schools of economics is also a fact that needs no illumination. However, 2020 could have been different. The world is grappling with an economic crisis like never before and dominant thinking in economics is under attack for its inability to offer novel solutions for pressing economic problems.

In this context, there is an increased recognition for state and decentralized community-driven decision-making in our economic lives. The call for newer curriculum and approaches in economics suited to the problems of the 21th century is becoming vocal, as the pandemic exposed many limitations of mainstream economic thinking. Further, there is a heightened awareness about the need for diversity in the economic profession and awarding of the Nobel Prize. Despite all these factors, the Academy went about in a business-as-usual fashion.

The advances in auction theory brought about by the winners of the Nobel prize has had a deep impact on both theory and application of auctions. However, by awarding the prize to a theory whose umbilical cord with privatization and neoliberalism is obvious, the Academy has once again made its ideological predilections and political preferences clear.

The writer is a PhD candidate in Sociology at the Department of Humanities and Social Sciences at the Indian Institute of Technology, Bombay. His MPhil project examined the use of auction theory in the spectrum auctions in India. The views are personal. The article first appeared on Newsclick.