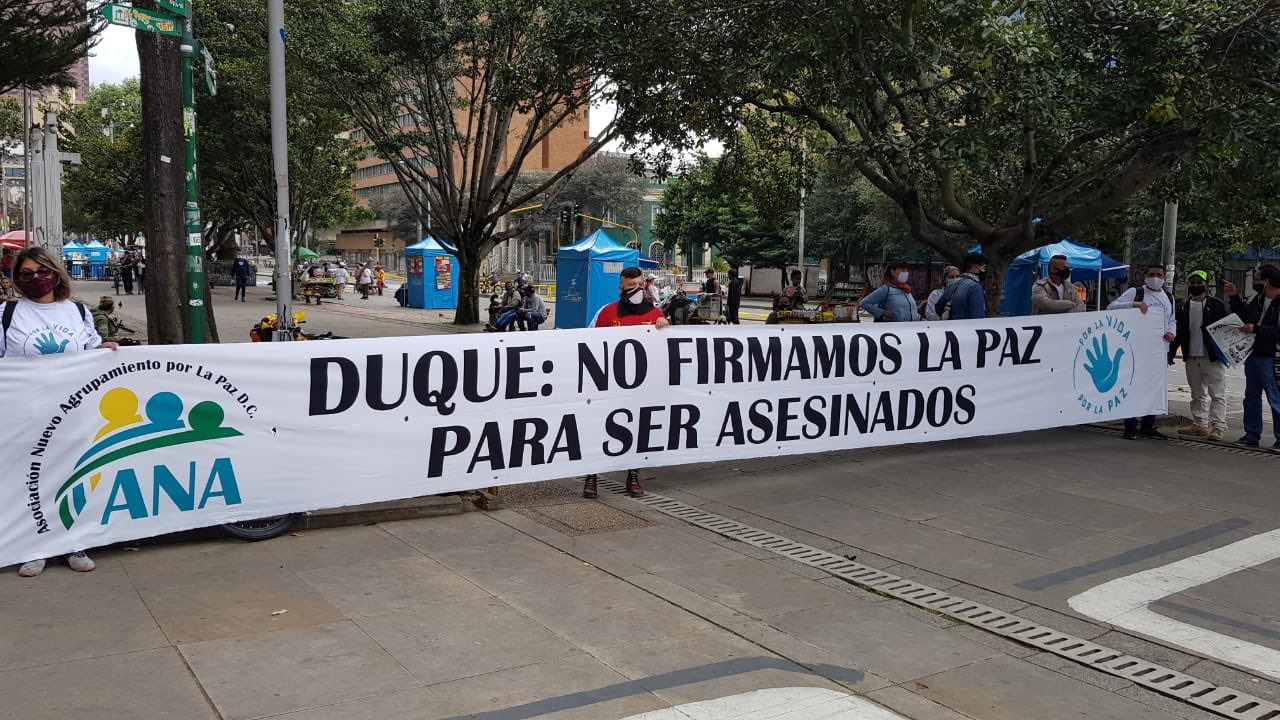 Violence against social and political leaders continues at an alarming rate in Colombia. This weekend, between November 13 & 15, a family of 3 was killed in a massacre; 2 Afro-descendant people, 1 Indigenous leader, 1 social leader and 3 former combatants of the Revolutionary Armed Forces of Colombia (FARC) guerilla group were assassinated by illegal paramilitary groups; and 2 minors were shot dead by a national army soldier. The alarming number of deaths is one of the highest death tolls registered during a weekend this year.

On November 13, the Cordoberxia Social Foundation reported that three people from the same family were murdered by unknown individuals in the rural area of ​​the Tierralta municipality, in the department of Córdoba. Peasant leader Onilda María Díaz Urango and her husband James Tomás Correa were killed in Lorenzo village, while their daughter Luisa Fernanda Correa Díaz was assassinated in El Banquito village at the same time. Onilda was a beneficiary of the National Comprehensive Program for the Substitution of Illicit Crops (PNIS), created in 2017 as a part of the peace agreements signed between the former government and the FARC in Havana, Cuba, in 2016.

The Cordoberxia human rights organization condemned these events and called on president Iván Duque to dismantle the paramilitaries and criminal gangs operating in the region. The Peasant Association for the Development of Alto Sinú (ASODECAS) also denounced the massacre and demanded that the national government protect the lives of peasants and peace signatories. The Tierralta Mayor’s Office also rejected the murders and urged the government to take action to preserve the peace.

On November 14, the mayor of the Alto Baudó municipality, in the Chocó department, denounced the murder of Emberá Indigenous leader and professor, Genaro Isabare Forastero. Forastero was detained by armed men on November 12 after they attacked in the Embera Dobida de Ecevede Indigenous community of the Ankozó Catrú and Dubasa reservations, located in Alto Baudó. Two days later, the community members found his dead body in the woods near reservations, confirming that the leader was tortured and later killed.

On November 15, the Common Alternative Revolutionary Forces (FARC) political party, which emerged after their disarmament and demobilization of the guerilla group as a part of the peace agreements, denounced that former combatant and peace signatory Heiner Cuesta was assassinated by firearm on the night of November 14 in the city of Quibdó, in the department of Chocó.

Senator from the FARC party, Sandra Ramírez, rejected Cuesta’s assassination and said that he “was assassinated by those who are afraid of a social transformation, the same ones who seek to tear the peace to pieces through war” and stated that they will “continue fighting for our dream of a stable and lasting peace.”

On November 16, the FARC party denounced the murder of two more ex-combatants and the wife of one of them in two different departments of the country. Former combatant Jorge Riaños Ramos was killed on the night of November 15 in the rural area of the Florencia municipality, in the department of Caquetá. Meanwhile, ex-combatant Enod López and his wife Eneriet Penna Rosas, who was the councilor of the Conservative Party of the Puerto Guzmán municipality in the Putumayo department, were shot dead by unknown men in the municipality. In the attack, their two minor children were also shot and have been admitted to a hospital.

The Conservative Party rejected the assassination and the FARC party denounced that with these two homicides, the painful figure of former FARC members and family members killed since the signing of peace agreements reached 241.

Likewise, on November 15, social organizations from the municipality of San Agustín, in the department of Huila, denounced the murder of two minors at a military checkpoint near El Palmar village. Joselino Irua, 14, and Emerson Dussan, 16, were riding a motorcycle when they were approached by military personnel from the Magdalena Infantry Battalion No. 27, who allegedly fired in the abdominal area of the minors. They were taken to hospitals in nearby municipalities, where they died from the injury.

In response to the killings, the command of the Ninth Brigade of the Army wrote in a statement “the uniformed man, who would be the alleged perpetrator, was placed at the disposal of the competent authorities to carry out rigorous investigations that allow the clarification of these painful events.”

Late on November 15, the authorities of the department of Cauca confirmed that two people were killed in an attack by an armed group in the Recogedero village, San Juan del Micay district, on the borders of the municipalities of Algeria and El Tambo. Rigoberto Camilo Caicedo and Helena Johana Yale Muñoz, restaurant owners from an Afro-descendant community were shot and killed by unidentified armed men.

The Institute of Development and Peace Studies (INDEPAZ) has repeatedly warned about the horrifying increase in violence in Colombia in 2020. According to the INDEPAZ, between January 1 and November 15, 2020, 254 environmentalists, human rights defenders, Indigenous, peasant and social leaders, and 56 ex-combatants of the FARC, who are in the reincorporation process, were killed.

Since the month of July, social movements and political activists have been mobilizing across Colombia to demand that the national government act to end the increasing violence and protect the life of citizens. The March for Dignity, Social Minga, Humanitarian Caravan for Life and Defense of Territory in the Cañón del Micay and pilgrimage for Life and Peace carried out by numerous social organizations and political parties in recent months are a few examples of the pro-peace mobilizations. However, the administration of President Duque has yet to take sufficient measures to stop these acts of violence.